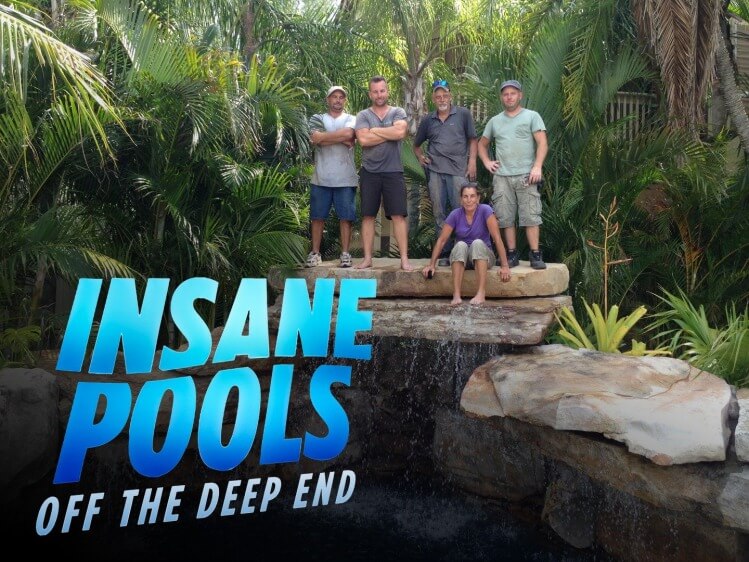 Typically, one would think that Animal Planet would air programs related to animals. However, recently, the network has deviated from its core subject matter. The camera crews have been following jockeys, ex-cons rescuing dogs, treehouse maniacs, and environmentalists over the last decade or so.

Likely for reasons to keep up with the other guys on the scene, the network is shifting its focus to human documentaries.

One such documentary is the critically acclaimed Insane Pools: Off The Deep End. Anyone that has watched an episode or two of the show can attest that it really deserves a spot in the entertainment industry.

Lucas Congdon and his team from Lucas Lagoons undoubtedly know all there is to build a stunning backyard pool. These guys don’t just remodel or construct your average square pool.

They go all the way, creating some of the most spectacular pools known to man. Fans have watched them build grand waterfalls, guitar-style pools, and other artistic and eye candy lagoons.

How was “Insane Pools” born?

Lucas says that he got inspired to get into the business when he realized that the market needed his services. Most people have the traditional square, circular, or rectangular pool in their backyard.

This is the same story in hotels, motels, and other hospitality facilities.

The award-winning pool designer, however, lives by the mantra “Go Big or Go home.” We’ve seen them transform boring pools into wild and unique water worlds.

The firm Lucas Lagoons was started over five decades ago. The family-operated business had initially been a landscaping enterprise in Florida but later turned to the business of constructing “insane” pools.

After hustling offline for about 20 years, the company turned to YouTube to create videos in a bid to get a wider audience.

This is what led them to be picked up by Animal Planet. The reality show, Insane Pools: Off the Deep End has aired for three seasons now. The fourth one is yet to be released.

Homeowners that have the privilege of working with Lucas and his team often find themselves going over the budget to get their dream pool.

One couple who planned to spend $25,000 ended up shelling out a whopping $165,000 for their remodeling project. Often, the projects take a relatively short period of time to complete, but the team leaves no stone unturned.

Watching the outcome of the project is always something to look forward to.

What happened to Sunshine?

Lucas’s team includes his mom, Jane Werley (who is referred to as “woman” by everyone), Chris Warren, the crash expert (he’s wrecked more cars than fans can remember), Matt Schuler or “Sunshine,” and John Messner or “Old Man.”

Yes, all of them have nicknames.

Fans love watching “woman” lay stones as if her life depends on it, despite being the crew’s oldest member.

She is the master stonemason of the group and is helped by “Old Man,” the guy known for being slow but confident in his craft.

In one of the episodes, the “woman” comes face to face with a snake hiding among the stones she was using to build a waterfall.

Most people would jump, scream, or make a run for it (Lucas and Old Man jumped up and ran like little girls), but women didn’t even flinch.

Chris “Crash” Warren is very hardworking. He can operate anything and knows pool construction like the back of his hand.

Unfortunately, he is an expert wrecker of anything with wheels, no wonder his nickname.

Then there’s “Sunshine’ who has since left the show. What happened to him?

Not much is known about Matt’s whereabouts. He’s pretty silent on social media and everywhere else.

However, according to a social media update on Lucas Lagoon’s Twitter and Instagram accounts, the native Staten Islander left reality TV to do real estate. Here is what the post read:

“Everyone wants to know what really happened to Sunshine. He was with us for two seasons but left Insane Pools: Off the Deep End to sell real estate.”

Fans took to social media to express their disappointment over Matt’s departure. Many of them claimed that they would miss his accent and his sweet personality.

Matt Schuler is now a successful realtor in Florida. The American Property Group says that the businessman who owned a pet store in New York’s Staten Island learned customer service from being in the pet business.

After running it for 15 years, he decided to change his career. He sold out, moved to Florida, and put up his real estate venture.

Sunshine was a valuable member of the Insane Pools reality show. He was quirky, funny, and talented.

Plus, his sweet accent was loved by fans. His departure sure hurt many for one or all the above reasons. The comforting thing is that he’s doing okay as a realtor.