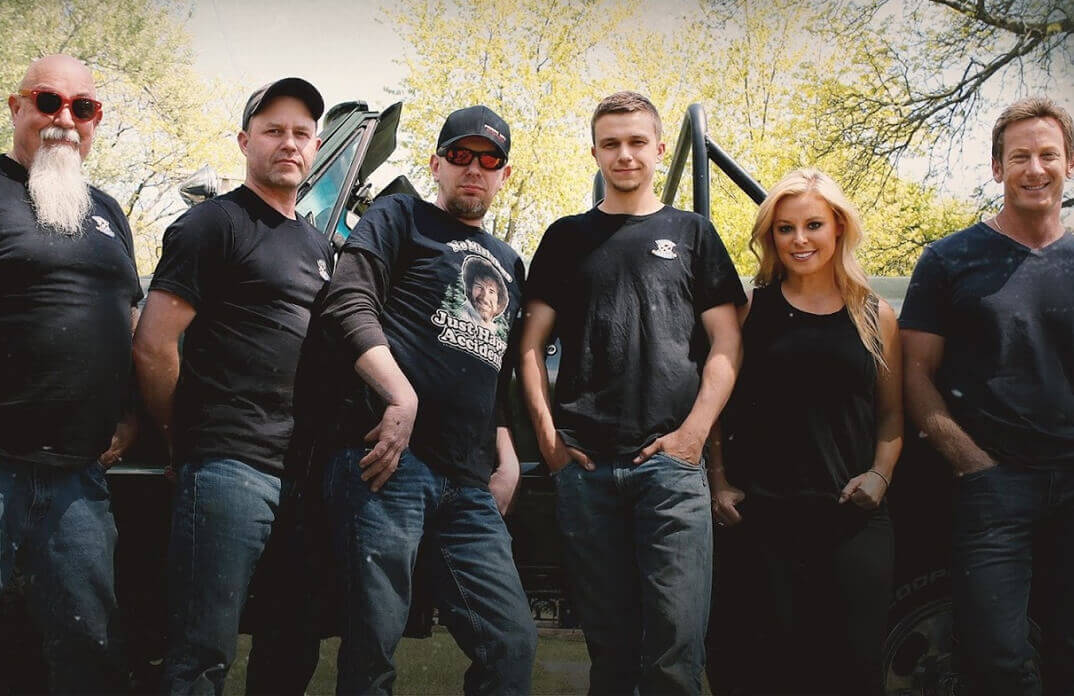 West Coast Customs, Wheeler Dealers, Misfit Garage, Garage Squad are all shows centring on the restoration of old cars. They also have in common that they tend to garner widespread criticism from viewers for being fake, repetitive, and delivered for entertainment purposes.

While we won’t analyze all the shows mentioned above, we will take a peek at Velocity Networks’ Garage Squad.

Garage Squad is a Chicago-based show which has aired for seven seasons. Its producers have spoken out publicly against accusations of staged scenes and events over the years. Let’s break down the claims against the show.

What is Garage Squad?

Have a vintage car, abandoned in the driveway or garage, that you would like to get it back on the road? Well, Velocity Network’s Garage Squad would be the place to go.

The series, which celebrates car culture as one of America’s treasured pastimes, stars a set of auto professionals who work around the clock to transform vintage cars brought in by American families.

For a long time, the show’s co-hosts were Bruno Massel and Heather Storm ( now replaced with Christy Lee) and featured Lead mechanic Joe Zolper, lauded for being on the show since the beginning.

Together, the three oversee a small team of mechanics who complete the necessary repair work for a mechanical restoration within seven days.

During each episode, the featured families get involved with the nuts and bolts action. Once the nitty-gritty action is complete, the squad returns the restored car to the owner, and as viewers may have noticed, it always ends up in an emotional reunion.

Did Heather Storm’s departure have anything to do with Garage Squad’s fake claims?

Heather Storm is a Philadelphia native with a passion for the auto industry. Before Garage Squad, Heather featured in small-time movies like Underbelly, No Bad Days, and Always a First Time.

In 2015 she joined the Garage Squad crew, and we get the impression she landed right where she belonged. She made tireless contributions to Garage Squad as co-host across four seasons however

in 2018 after 45 episodes on the show, Heather departed from Garage Squad.

Fans later discovered from a Facebook post by the star that the show let go of her. Heather’s post read, “As a car lover and gearhead, I have had such an amazing experience working on the show for the past four years helping make car dreams come true for deserving folks.”

“All the car owners I worked with truly have a place in my heart! I wish it could have lasted longer, but all good things must come to an end, eventually,” she continued. “I wish the best of luck to [Cristy Lee] and the entire Garage Squad team.”

Despite the abrupt departure, she didn’t leave on a bad note, and neither was she left without work.

Today, Heather hosts her own Youtube show called Drive Yourself Local where she travels across the country in a 1965 Ford Mustang and explores small towns along the way. Heather has her hands full as she also co-hosts a podcast called Man Seeks Adventure.

Now that we have clarified Heather Storm’s departure – let’s move on to why the show has received criticism surrounding being fake.

Like so many car restoration shows, Garage Squad has been accused of instigating petty squabbles, hiring incompetent mechanics, and having an overemphasis on not meeting artificial deadlines.

From a glance, everything seems quite legit. The show’s website contains a tab for random people to apply for their car to be fixed, a bunch of passionate mechanics maneuver around tools, and collectively the team turns beat-up cars into restored cars for deserving people – while adding a whimsical dash of comedy.

Comedy is one of the reasons the show has been accused of being fake. It’s claimed that under comedy – knowledge, and passion do not seep through prominently.

Shows producer Lega debunked this notion in an interview with Chicago Reel, stating that although “we like to bring comedy into it, too,” the show’s priority is to teach experiences and get things done.

However, a discussion forum on Grassroots motorsports reveals fans are still concerned about the limited knowledge the show offers to real car enthusiasts.

MulletTrucker wrote, “Just watched Garage Squad for the first time last night. They were working on an el Camino. I don’t know how the other episodes went, but after watching this one, It’s just another show I will pass on.”

“I would think the producers would know car people watch the show unless it’s a new scripted reality comedy show,” he added.

“Had a couple of people I know get their cars messed up on Overhaulin. My Girlfriend wanted to submit my car. I told her if it ever disappears out of the storage spot and it ends up on the show, they own it!”

While on a forum for Antique Auto Mobile Club in America, Joe Padavano claimed restorations were substandard.

“Garage Squad is not a restoration shop, nor is it a Foose-style modification shop. Their schtick is that they help owners finish stalled car projects. Typically they do whatever can be reasonably done to get the car on the road in a week or less with minimum effort. Does this sound like a 100% correct restoration? Not a chance,” he wrote.

There is no word on a lie there regarding tight deadlines. Nonetheless, viewers find it fascinating that although the show emphasizes that they are always pushed for time, they always meet deadlines (how convenient).

We cant attest to time spent in the workroom. However, it is a little odd that they always play on the same tired line of not making tight deadlines when they, in fact, do.

On the other hand, fans who love the show see no fault in its storyline or cast.

“I absolutely love the show. I think they are all a bunch of talented, knowledgeable good-hearted people,” read a review on IMDb by Tgrinna.

Accusations of story line tampering go beyond car shows. Alaskan Bush People or Alone have been receiving similar criticism in the past.

Did Garage Squad get canceled?

Despite speculation of the show being canceled, fans will be thrilled to know that the show recently finished filming its eighth season. On a statement on their website, the car restoration series not only announced that they’ve started filming, but they have also announced a new addition to the crew.

Bogi, a dealer trained as a BMW technician and the owner of a successful auto repair and education facility, will be joining the crew through an all-new round of killer car rescues.

The eighth season is scheduled to premiere sometime in the Fall of 2021.

Getting into Garage Squad

If you have not been put back by the tainting claims of the Garage Squads‘ legitimacy, and you have a knocked-down vintage car that needs to get back on the road, then here is how you could get your vintage vehicle on Garage Squad.

According to the show, producers accept families to feature on the show year-round. Because the group is quite famous and meticulous about who they choose, getting your car to feature might prove a bit of a hassle. The show’s producers revealed that they received over 40 000 submissions for seasons 4 and 5 alone.

Each crew member brings 30 of their top from the thousands of submissions and argues it down to the best in a meeting. Nevertheless, don’t be bummed, although tedious, if your story is compelling enough, you might just be fortunate to have your vintage ride brought to working order by Garage Squad.

While there aren’t hard facts to rule out that Garage Squad is fake, undoubtedly, reality shows are synonymous with adjusting scripts and choosing pretentious characters to increase viewer ratings. This would not be the first or the last time a vintage car reality show gets thrown under the bus for fictional narratives.