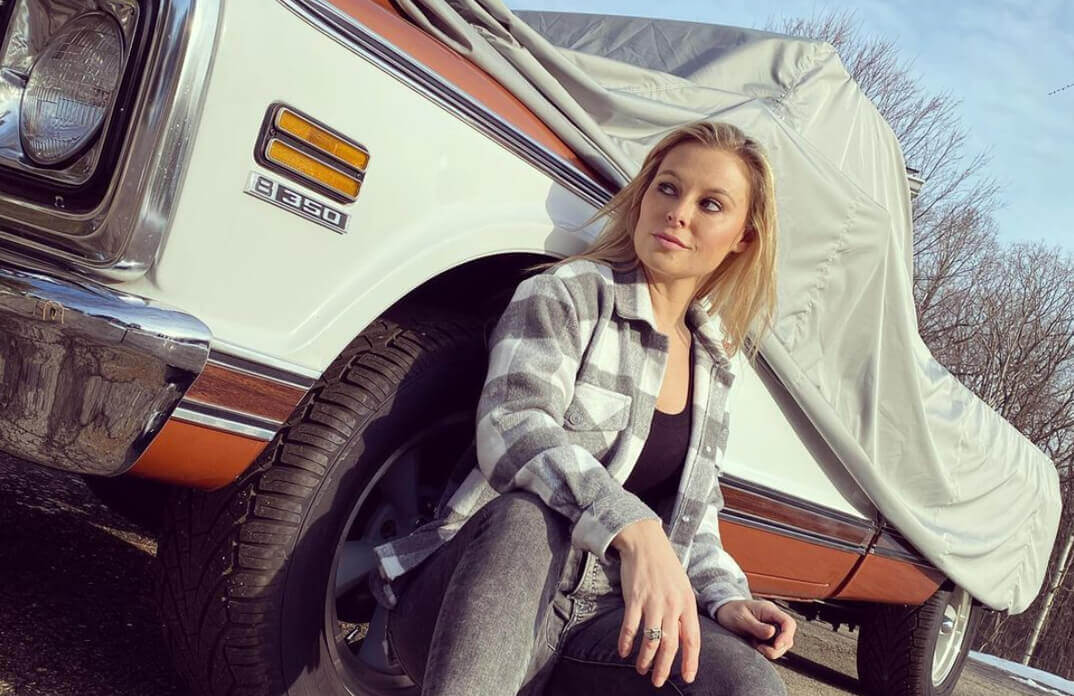 When people think of vintage car transformation shows, Garage Squad has to be among the top. With its approach to automotive reality tv, which brings together expertise and entertainment, it’s no wonder why fans keep coming back for more.

In addition, the show is known for transforming just about any neglected vintage vehicle – that has been long overdue for restoration – into a dream machine ready to hit the road again.

After the fifth season, instead of being at the back end of transforming vehicles, the show got its own transformation when longtime co-host Heather Storm left the pack. In its following season, fans got a new taste of Garage Squad with a whole new female auto enthusiast.

After five seasons and 45 episodes, co-host Heather Storm left MotorTrend TV’s Garage Squad and made way for an addition of a new squad girl in the show’s sixth season.

According to Earn The Necklace, Cristy Lee, a 37-year-old Florida native, was the show’s choice for a fresh face.

Cristy Lee, who was elated to take on the role of host with a dedicated team, came out to express enthusiasm before debuting on the show. “I’m super pumped to be part of Garage Squad,” Cristy says. “It’s a great show, great concept, great stories, great builds.”

While Heather Storm’s departure weighed heavy on co-cast members and fans, the shows Joe Zolpher and Bruno Massel looked forward to working with the bubbly personality with tons of automotive know-how.

In a media briefing, Joe said Cristy adds a new layer of expertise and entertainment to the show and that the reality tv series’ fans would quickly fall in love with her.

For auto enthusiasts – especially fans dedicated to all auto channels like MotorTrend, Cristy Lee would not be an unfamiliar name to pop up in the automotive genre. Cristy Lee is arguably one of the most famous women on the network and industry.

But like many of her peers may attest to, success was not overnight. Cristy’s prestige comes from an automotive passion dating decades back.

From an early age, Cristy has shown a keen interest in cars and mechanics. According to Lee, her father, an instructor at the American Motor Cycle Institute, would take her on trips on his dirt bike, aged three.

Three may have been a little too young, but Cristy, who shared interests with her father, was pleased about the amazing experience.

From then forth, Cristy has had an overwhelming presence with anything having to do with the auto industry. She has been to almost every car show in North America, hosted several lots too, and today knows way more about cars than the average Joe.

Deemed almost solely an automotive industry professional, Cristy did spend her formative years exploring different career paths. In an interview with Cruise News, she revealed that she started her career in the entertainment industry with modeling and acting.

The bubbly personality appeared in commercial circuits and even featured on the set of the 1997 show Wild On. Fans might agree though, Lee’s big break in reality tv came after hosting Tunnel of Fire alongside dare devil Clint Ewing.

Top Speed reveals that another surprising turn to Cristy Lee’s career is being a realtor. And not just a realtor, a PRO. Lee moved from her hometown, Florida Daytona Beach, to pursue the real estate industry in Detroit, Michigan. From the mid 2000’s to 2008, Lee garnered success in her career.

Unfortunately, the 2008 crash affected Lee’s business, but she has not completely given up on the industry just yet. The female celeb hinted at possibly joining HGTV for her own real estate show.

Cristy Lee’s career in the motorsports and automotive industry

Cristy Lee professionally took up a career in motorsport as a licensed motorcycle racer. After racing at club level, Lee switched the cycle for the mic, becoming a reporter. Without any formal journalistic or mechanical education, Lee went ahead with her career in sports journalism.

As a sports journalist, she covered AMA races, did automative narrating for Chrysler and Jeep, and was a pit reporter for Feld Entertainment. Additionally, Lee is a brand ambassador for Kawasaki Motors.

While working for Jeep, Cristy was approached by Velocity Network producers (now known as MotorTrend TV) to star in one of their shows.

Interestingly, Lee almost lost her opportunity at a MotorTrend show because she thought the producer who approached her was phony.

Eventually, Cristy Lee was cast alongside Bogi Lateiner and Rachel De Barros to host All Girl Garage, which premiered in 2012. The all-girl trio restored vintage cars in their auto shop. Cristy became a role model for young girls who want to follow in her footsteps, winning the automotive industry.

With more than a decade covering motorsport and a lifetime of loving cars, it is no wonder the charismatic personality scored a spot on Garage Squad. Here is to a deserving gal landing a great opportunity!

What is Garage Squad?

Garage Squad is a MotorTrend car show filmed in Chicago and focuses on car restoration projects in the area.

The show’s main team includes Minooka mechanic Joe Zolpher, world champion National Hot Rod Association driver Bruno Massel, and Cristy Lee. The trio oversees a small group of mechanics, and together they restore vintage cars, getting them back up and running again.

Fans who enjoy reliving stories of broken-down cars being brought back to life will be happy to know that MotorTrend has greenlit the show’s eighth season. The upcoming season will premiere in the fall and feature an entry of yet another Garage Squad girl, Bogi, a BMW-certified mechanic.