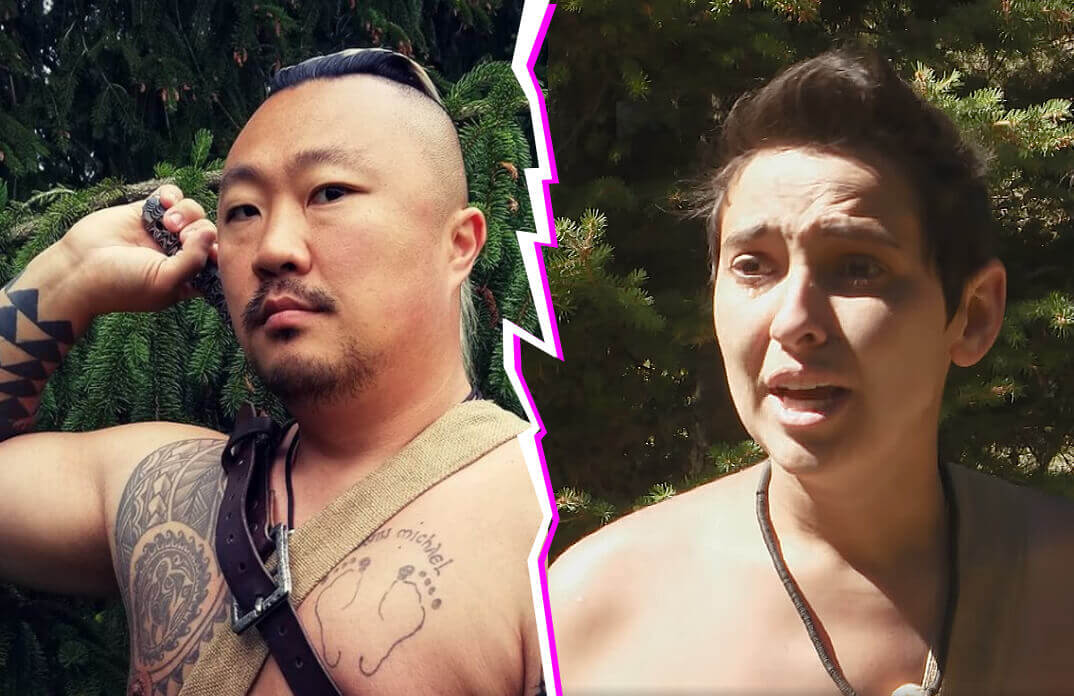 Discovery Channel’s Naked and Afraid is a show full of trialing tests – two strangers need to tough it out, through some of the world’s most extreme environments, a lack of adequate food and water, without modern technology – and all, while bucking naked.

In this downright disturbing situation, the last thing a survivalist would want is to pair with a partner whose frail and intolerable.

In past Naked and Afraid episodes, ambitious survivalists rely on each other to make the survival process at least a bit more bearable.

However, in a recent episode of Naked and Afraid, which chartered the events of Sam and Joe, the adventurous challenge was far from a peaceful ordeal.

What Went Down Between Sam and Joe on Naked and Afraid?

In Naked and Afraid’s, :The Devil’s Woods“, a frigid Montana wilderness pushes a partnership between “Gold star Lesbian” Sam, and family man Joe, over the edge.

In the episode’s teaser, Sam expresses that her biggest reservation about going into the show is seeing a man buck naked. Apparently. Sam has never seen a man naked in her life and was disgusted by the thought of accidentally touching male parts.

As the episode begins, fans are almost fooled into thinking the two would hit it quite well. The two laughed about not be the only nut cases in the dessert-like valley. Eventually, the pressure sets to the survivalists, conjuring up uncomfortable situations.

A recent episode of Naked and Afraid made for an uncomfortable watch when self-proclaimed “Gold Star Lesbian” Sam repeatedly lashed out on a calm and collected Joe, the man she is meant to rely on while exposed in the unforgiving nature.

Sam appears to calmly but frankly tell a laid-back Joe who has just come out of a sick frenzy that he needs to stay hydrated in an explosive episode. A remorseful Joe, who was not drinking water, acknowledges his fault.

However, Sam insistently reprimands Joe as if she were playing a mind game. Joe, who seemingly always has a chilled demeanor, tries to prevent an argument from flaring up but ultimately fails to do so to what appears to be a ticking time bomb, Sam.

“Nothing out here takes more priority than water. […] When you went hiking, you were gone all day. What if this would have happened? I wouldn’t be able to help you. And then what?” Sam insistently lectures Joe.

“You don’t know how dehydration works. That’s not how it works. Once you hit the point where you’re on the ground, you are hours away from things starting to shut down. Like, Joe, you can die.”

At that moment, Joe sat on the ground with a bowl of water, trying to recover and detect what led to his breakdown. Sam, who is still mad at his supposed reckless behavior, snatches the water from him in an angry front and throws it onto the ground.

In what quickly turns to be a tantrum outburst or frustration (call it what you may), Sam orders Joe to admit to his self-destructive behavior and to state that she is right about him needing water for survival.

With many attempts to trigger Joe into aggressively engaging in her verbal abuse (in what had seemed like hours of a back and forth verbal exchange), Joe remains calm and eventually tells her she is right.

“There is no sense in arguing with her, So I told her exactly what she wanted to hear,” said Joe.

Reacting to the episode, fans applauded Joe for being an incredible person and trashed Sam for being a horrible person.

Joe, who we have established to be one to not take kindly of conflict and unpleasant words, said on a Reddit post that fans should stop with their awful posts and be kind to Sam, who he believed is a “good person.” Well done, Joe.

Joe on His Naked and Afraid Experience

Ironically, Sam, who tells Joe he does not belong in the Naked and Afraid island and “needs to tap out,” taps out before surviving 21 days, and Joe makes it to the end.

In a Discovery Channel, Naked and Afraid Survivalist Check-In, Joe recalls moments from the explosive episode. “Malnourishment, not a whole lot of sleep, my body was pushed to the limit,” he said.

Viewers can see Joe chase out wild animals, intensely shiver while sleeping, and thump on the ground – covered in bug bites.

At the end of the terrifying experience, Joe expressed that his time in the Naked and Afraid environment was humbling and brought a new perspective on life.

One thing that Joe set to accomplish during the show was finding his biological father and mother. Unfortunately, after putting a request to an adoption agency, he hit a dead-end – having still not have found his birth parents. On the Naked and Afraid check-in, he told his parents to know that he is looking for them.

In a Reddit post, Joe revealed that he lost his adoptive parents to their battle with cancer. It was also some of the reasons he remained calm during a heated Naked and Afraid survival leg.

According to Joe, through their treatment and decline, they never lost track of themselves, “they never tapped out.”

Joe victoriously escaped the lonely Naked and Afraid ordeal induced by team member Sam. However, Joe has suffered many life traumas that have forced him to be alone and arguably afraid-situation.

It is hence refreshing to know that Joe has submerged from his traumas as the seemingly amazing person that he is today.

Did you know that Naked and Afraid can actually spark relationships among participants?

In fact, the show’s producers thought so too and just launched Naked and Afraid of Love! Take a look here.