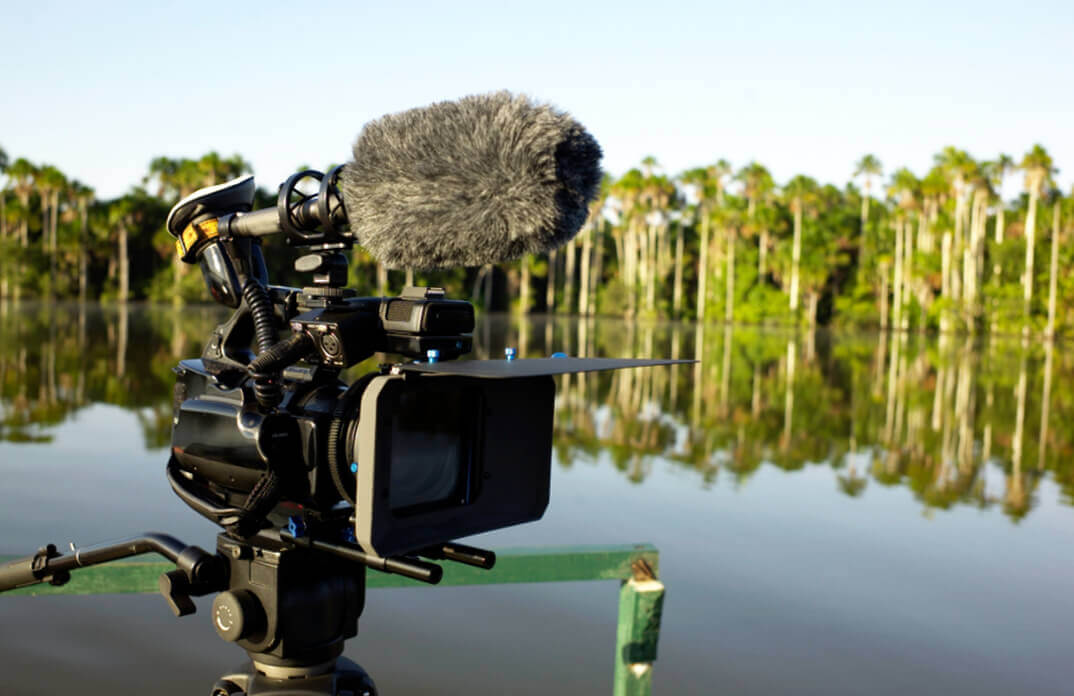 Naked and Afraid, produced for Discovery Channel by Renegade 83, is among the most popular survivalist reality television shows. Unsurprisingly, putting a nude man and woman out in the jungle for 21 days is quite intense and makes for a show that would capture the imagination of millions of viewers worldwide.

Add to this the dramatic arguments and contestants’ survival skills, and you can’t help but wonder how this show is produced. Well, we’ve done quite some research, and we’ll tell you everything you need to know about how Naked and Afraid is produced.

Not many people would sign up to be cast on a TV show that asks them to strip naked and find ways to survive in a strange place with no food and water. So, how does the production team of Naked and Afraid get cast members for the show?

Well, it turns out that thousands of people from all across the U.S. apply, and many are even desperate to be cast on this dramatic reality show, but only a few make the cut.

Kristi Russell, the owner of the popular casting agency Metal Flowers Media, getting qualified participants for Naked and Afraid is one of their most challenging assignments.

The agency scouts ex-military survival groups, wilderness school, and just about anywhere they can find elite survivalists and those who have interesting survival stories.

Speaking to Channel Guide, Russell said fire, water, and shelter are the main skills a potential contestant must have to be considered for the Discovery Channel series. “If you can prove to us that you can start a fire in more than one way, that you have deep knowledge of shelter building, and if you can tell us at least three ways to get water, and prove it…you got a huge leg up on everyone else,” said Russell.

How Do They Find Locations For Naked and Afraid?

The process of finding cast members for Naked and Afraid is intense. So many people want to be featured on the show, but only a select few with advanced survival skills make the cut and are featured on national television.

So, how about the locations? We’ve all seen those cruel jungles and frozen tundra where the show’s filming has taken place. How does the production team find these wild locations to begin with? The team considers several things when choosing a location for each episode.

First, the location can be anywhere in the United States and around the world. Cast members have been filmed in Tanzania to Costa Rica, Florida to Australia, Brazil to the remotest parts of Bulgaria, and so many other places.

According to one of the show’s executive producers, the location has to be remote to create a sense of isolation, which is the whole idea of the show.

The place also needs to have some infrastructure to allow the participants to access basic resources such as drinking water.

Rankin further added that ideal locations must have bearable temperatures that will not create too many problems.

And, the location needs to have access to urgent medical care not too far away.

It looks like a lot goes into scouting for locations from where to produce each episode of the show. But, one thing’s for sure, the production does a great job of locating the perfect setting for filming the reality series.

Naked and Afraid Crew Stays Away Most of The Time

Apart from recruiting participants and scouting for a location, another question that gets asked a lot about how Naked and Afraid is produced is how the crew can film the cast members 24/7 every day for three weeks.

Well, first of all, the on-location crew is very small for a show as popular as Naked and Afraid. There is only one director of photography, an audio person, producer, and camera assistant.

In addition to a day and night medic, there are two local personal assistants, one working during the day and the other at night.

Rankin says that people like the medics and PAs and any other non-filming member of the crew do not come to the filing site unless they have been called upon to provide their services.

The filming crew is obviously on sight doing their job, but they leave the site before it gets dark. This is understandable because they also need to be safe, given how remote and treacherous some of these locations are. At night time, the cast members are left on their own.

When it comes to accommodation for crew members, it all depends on the location but generally, they usually set camp a few miles away from the contestants. In other locations, they might need to hike to and from the site for an hour, while in others, they might spend their nights in a nearby hotel.

The Cast Kind of Helps In Producing Naked and Afraid

Since the crew does not film at night, the production team relies on the contestants to take the footage, even if it is not professionally done.

Even though the cast is left alone, especially at night, contestants are issued with an emergency radio transmitter and whistle to call if there is an emergency.

In addition to this, contestants are given dairy cams which they are encouraged to use when the production team is away or cannot follow around the contestants for one reason or the other. According to Rankin, they usually install a fix-rig camera in the shelters, which gives contestants more time on their own and frees the production team without them missing anything.

By encouraging the contestants to use dairy cameras to capture raw, unedited footage of their own, the show’s producers can keep the show more authentic.

In this state, the contestants are more vulnerable than when the camera is on, and everyone is around, which makes for good television.

Rankin said the production team is happy with the contestants’ coverage, even if it is imperfect. This is exactly what makes the show powerful—because there is no producer behind the camera, especially once the sun goes down.

“The less interaction we have with the survivalists, the better. We try to have as little interactions as possible,” said Rankin.

In particular, the production team tries to stay away when the contestants are hunting. During such time, they walk behind the survivalists.

Instead of taking upfront shots, they take wide shots to give viewers a sense of the surrounding environment that the contestants are navigating.

It is common for producers to strap a GoPro camera on the contestant to get footage for those times when the production team cannot film. The footage from a GoPro camera strapped around a frantic survivalist will not be all that great.

Generally, when filming Naked and Afraid, producers are required to keep their interactions with the show participants to a minimum.

The First Day Of Naked And Afraid Is Scripted

There is no denying that the first day is the most awkward moment in each Naked and Afraid episode.

So, How Do They Produce This Scene?

Although most of Naked and Afraid is real reality TV, that first day is staged, and contestants must follow a specific script they have rehearsed beforehand.

Writing about her experience for Outside, Blair Braverman, one of the most memorable contestants from the show, admitted that a lot of what happens on that first day is meant for TV. This means that contestants have to do and say what the production team asks of them.

For Braverman, for example, she was required to take off her clothes two times for the production team to take shots of her and the scene.

She was issued with a script on how she should take off her clothes, walk to the ‘landmark’ to meet her partner, and say “whatever earnest greeting or joke they have rehearsed.” After the dramatic meeting, the survivalists are each given their sacks to hide their microphone transmitters.

Braverman reiterated what executive producer Rankin said: the crew usually leaves before sunset, and they leave the cast members alone with only cameras mounted on tripods and trees.

They also use their hand-handled diary cameras to document everything that goes on when the crew is not around.

This includes that time when Braverman and her partner’s sleeping ground we surrounded by hyenas at night. We were only able to see this scene thanks to the contestants’ coverage, which is commendable!

Some Editing Goes Into Producing Naked and Afraid

Reality TV is not completely “real” – some parts are scripted and edited to fit television. For example, for Naked and Afraid, contestants are filmed for 21 days, but all this is squished down to a single episode lasting 44 minutes.

Without a doubt, the production team must do plenty of editing to fit all that footage into one brief episode for television.

Unfortunately, a lot of what happens during filming is cut out, and it is common for contestants to feel that they were not accurately portrayed by the end of the 44-minute episode.

Well, that is the world of television for you—there are villains and good guys, and editing helps create these roles, even when a show is dabbed as ‘reality tv.’

There have also been claims that aside from cutting some real footage from Naked and Afraid, the producers also add scenes that could not possibly be authentic to stretch the truth even further.

For example, in the case of the infamous contestant Honora Bowen, it is reported that the show’s producers handed her the magnifying glass we often saw her with.

Still, she was told to claim that this was a gift from her deceased father. There was also the overly dramatic reaction to her stealing potato chip crumbs!

In another example, Kim Shelton, a survivalist on the show, got serious food poisoning from eating turtle curry before the show began.

Shelton was treated using IV fluids, which was definitely the right thing to do. However, she later claimed that the producer made it look like she had fallen sick in the course of filming and that she recovered on her own with no assistance.

There are also claims that the production team has at times ‘planted’ food or placed food in convenient places to make it look like the survivalists are the ones who hunted for and caught the food. An incident that comes to mind is when one of the contestants used a snare to catch a deer.

This didn’t seem realistic to some viewers because the deer did not have the usual marks of an animal caught in a trap.

Another example of editing the production team of Naked and Afraid can be seen in how they cut out the sections where one of the contestants, Alison Teal, did some really impressive things such as building a 40-foot ladder and fishing hooks.

Later, Teal said that although a lot of the show is real, she was disappointed that the production team left out her accomplishments to focus on the “action-packed scenes.”

Finally, even producers of the show admit that they engage the contestants to provide mental and emotional motivation.

There is no doubt that Discovery Channel’s Naked & Afraid is an interesting watch for any reality TV junkie. As you can see, even though the show’s onsite production team is small, a lot goes into producing a captivating show that is fit for TV.

Going by the confessions of former contestants and producers, a lot of the show is real but inevitably, some editing and sprucing up is done to keep viewers interested, and of course, ratings up.