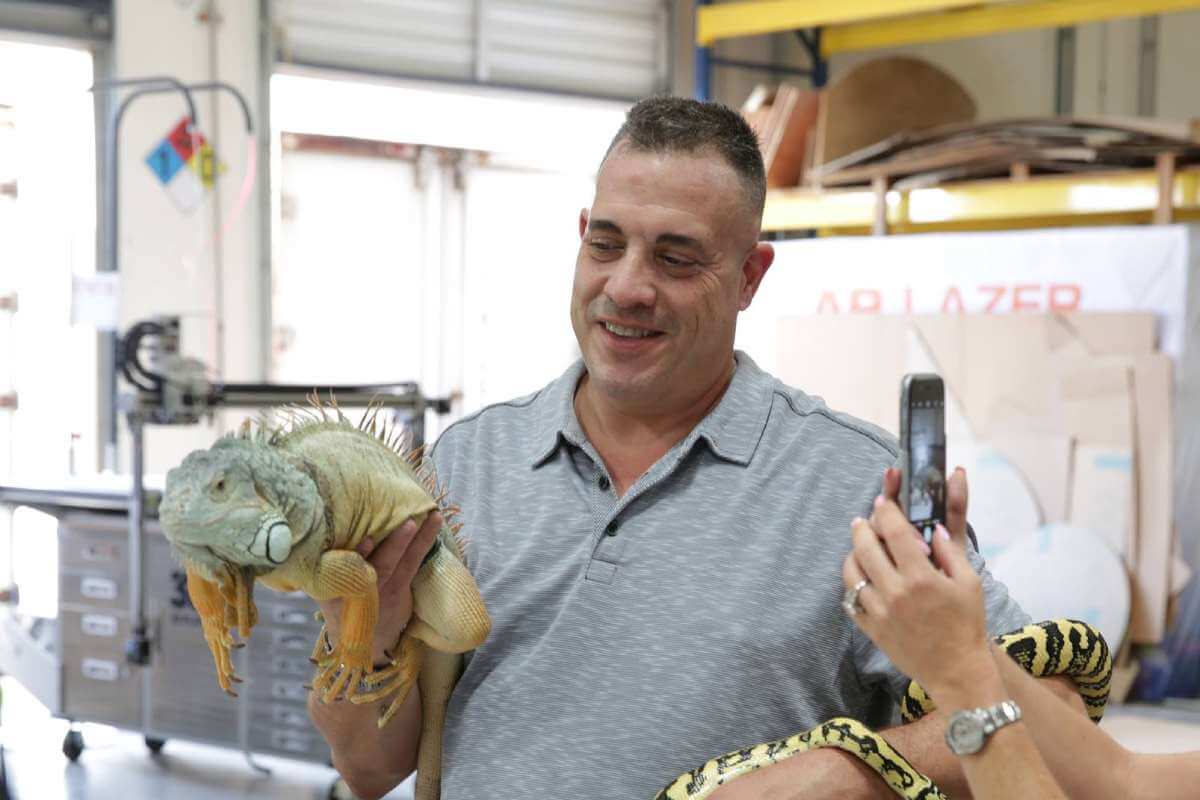 We don’t know about you, but we definitely didn’t see the news about Tanked getting canceled coming. Talk about a real surprise! We avid fans miss the show and the awesome cast, including Brett Raymer, Irvin Raymer, Wayde, and Heather King.

Wayde was no doubt the life of the show. But, things seem to have ended badly for him after it was reported that he was involved in a domestic violence incident with his wife, Heather. Animal Planet canceled his super popular show soon after this incident.

It has been about three years since the final episode of Tanked, and a lot has happened since the last time we saw Wayde delivering ultra-expensive fish tanks for celebrities. The good news is that we have the insider deets on what Wayde King is doing now.

The True Story About Wayde King

From his upbringing, there was no doubt that Wade King would end up in the fish business. Born on September 19, 1966, in Long Island, New York, King was raised in a family of fish dealers.

Later in his teen years, he would spend summers at his stepfather’s shop cleaning and restoring aquariums. Although he studied to be a machinist, he remained passionate about fish and the endless possibilities aquarium-making provided.

King eventually moved to Las Vegas, where he launched a career making fish tanks, first for ordinary folk and eventually for big-time celebrities through the Acrylic Tank Manufacturers (ACM) company.

How ACM came to be a family business was through sheer coincidence. Wayde made a fish tank for Irvin Raymer, one of his early customers. Raymer loved the aquarium and admired Wayde’s work so much that he proposed they go into business together. And off they went!

Heather, Irvin’s daughter, joined him and Wayde as an accountant for ACM and held that role until the company dissolved. Of course, Wayde and Heather married and stayed together for more than 20 years. Brett Raymer later joined the trio, becoming the Chief Operating Officer (COO).

Tanked’s success can be attributed to how well these four worked together. The dynamic team won the hearts and minds of their TV fans and real-life clients alike, in the process making great fortunes from their aquarium-making business.

Why Was Tanked Cancelled?

Animal Planet announced that it had canceled Tanked after the season 15 finale that aired in December 2018.

The network announced the news a few days after it was confirmed that Wayde and Heather King were involved in a domestic violence incident.

Animal Planet, however, insisted that canceling the show had nothing to do with the drama between the married couple. In a press release, VC of communication and media relations, Paul Schur, claimed that the show came to a natural ending late last year.

According to Schur, the network canceled the show months before the drama between Heather and Wayde ensued.

Wayde and Heather King Got Divorced

Wayde is no longer married to Heather C. King, his wife of 21 years, with whom they share two children.

Days before Animal Planet announced the cancellation of the series, the married couple got into a violent altercation that ended up with Heather filing for divorce. Heather was arrested for slapping her husband and kicking him in the stomach after they argued.

According to Wayne, his wife continued driving her car with him hanging out the window, a claim she denied. However, Heather admitted to slapping Wayde and told the police she did it because Wayde was blocking her from getting out of a room.

The TV star was booked on a misdemeanor domestic violence charge but was later released from custody. Heather immediately signed for divorce, ending her marriage spanning over two decades and producing two children, Morgan and Taylor King.

It has been three years since that incident. Wayde is no longer with Heather and hasn’t posted anything on his social media indicating he is dating someone new.

Acrylic Tank Manufacturing Is No Longer In Business

In addition to Tanked being canceled, it seems that Wayde King’s company, Acrylic Tank Manufacturing (ACM), also shut down.

This means that Wayde is no longer making fish tanks for celebrities or ordinary folk via his old company.

The closure of ACM is quite shocking and frankly sad, given how long Wayde took to build his business and make a name for himself in Las Vegas and beyond.

The reason why ACM shut down is unclear. Wayde never explained why he stopped manufacturing aquariums to his fans and customers.

What is Wayde Kind Doing Now?

After Animal Planet canceled Tanked, the move was probably a big blow to Wayde and the rest of the cast. This was a hit show, and there is no doubt that it brought customers to the business and paid the cast handsomely.

Wayde was determined to keep moving forward. Media reports revealed that Brett Raymer and his co-host Wayde King launched a YouTube channel titled “The Lifestyles of the Fish and Famous” in April 2019.

The YouTube series featured celebrities and their aquariums for a few seasons, but things slowed toward the end of 2021.

Today, the channel no longer exists; the owners haven’t posted any new content there for quite some time. It might be safe to say that King’s and Wayde’s channel is defunct.

Wayde King’s estimated net worth is about $5 million. He earned most of his wealth from his acrylic tank business but starring on a hit reality TV show was a plus that likely boosted his net worth.

Looking at Wayde’s social media, it looks like he is still building custom fish tanks for celebrities here and there, even though his official company folded.

He has also been posting about ”upcoming projects” that he is excited about, urging his fans to stay tuned. So far, he hasn’t made any major moves, but fans are looking forward to a Tanked spinoff.

We wish Wayde all the best in his endeavors. Hopefully, we will see him back on television.