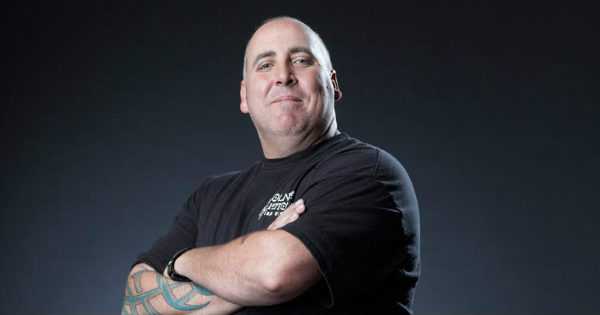 When it comes to reality TV (or TV shows in general), people come and go. Very few have the same actors for the entire duration. Counting Cars, a show based on a customization company know as Count’s Kustoms,  is no exception.

During the first and second seasons of this reality TV series, Scott Jones was Count Kustom’s store manager. If you can recall, Scott was the badass big guy who used to breathe fire on his employees.

He had no problem being at loggerheads with everyone, including Danny Kocker, his boss. At one time, he ordered everyone to give him some pushups, which they reluctantly did.

On the positive side of things, Scott was very good at doing his job. He managed the books quite well and always looked for ingenious ways to maximize profits for the company. With him on the management, Danny was sure that his shop was well taken care of.

What Happened To Scott?

Unfortunately, Scott Jones didn’t last too long on Counting Cars. Despite making things happen for two seasons straight, he didn’t come back for the third season.

Instead, Danny hired his best friend, Kevin Mack. Neither Scott nor the History Channel has come out clean to explain why the talented bookkeeper from Counting Cars was no longer on the show.

Once again, the exit left room for plenty of speculation. Some of the theories that have been put forth regarding Scott’s exit include the following.

Earned the Necklace made a report claiming that Scott embezzled money from Danny, which led to him being fired from Count’s Kustoms shop. The theory of embezzlement is not new in the car restoration shop.

In 2017, another employee, named Frontiera, allegedly stole funds close to $75 million from Count’s Kustoms. Some fans are of the idea that Scott might have followed suit and got into trouble for it. After all, he was the man in charge of the shop’s books.

This interesting case happened right under Scott’s nose.  It is said that Frontiera splurged the money on buying air tickets and that he also put a downpayment on a brand new Range Rover. What is even worse, Count’s Kustoms says that this employee did not pay their income tax on time, which led to the IRS issuing a fine of $18,000.

As you might guess this theft had a huge impact on the company’s finances. Frontiera was referred to the job by a Delaware-based company known as Randstad Professionals.

Count’s Kustoms decided to sue this company, arguing that they knew that Frontiera had a history of embezzlement and had even been previously charged.

However, Randstad was not ready to take responsibility. They counter-sued the automotive company, insisting that they had an agreement with Count’s Kustom that Frontiera would not be put in a position that required or allowed him to handle money.

As for Scott’s departure, one is certain that this is what really took place, but if it did, it would have been reason enough for Danny to throw his shop manager under the bus.

The second speculation as to why Scott left Counting Cars is family-related. According to this theory, the former Count’s Kustoms manager left the show after his wife gave birth to his son. To be there for both mom and baby, Scott had to move to Tennessee, a world away from Texas.

If you are a keen follower of Counting Cars, you know that his son was born after season 3, episode 1, just about the time the reality star left Counting Cars. Throughout the first and second seasons, Scott mentioned countless times his connection to Tennessee. With that in mind, this theory seems to make much more sense than the first.

Trouble With The Boss

Among all the employees at Count’s Kustoms, Scott was unmatched with regards to personality. He got into arguments with his boss more often than not. Danny and Scott used to debate everything, including project budgets, deadlines, and everything in between.

Granted, Scott was excellent at his job, but working with such a troublesome employee can prove challenging at times. There was a time on the reality television show when the two were at loggerheads over the resale of a vehicle.

Danny didn’t have plans to resell it after customizing it, but Scott would have none of it. He wanted the car sold. It’s total speculation, but Scott may have pushed Danny too far with his character and personality, enough to get him kicked out of the shop.

Tired Of The Camera

Some fans have also pointed out that Scott may have gotten tired of filming. The same was said of his colleague Roli, who also left Counting Cars without an explanation. It is said that Roli’s equipment, which cost thousands of dollars, was stolen, but that’s a story for another day.

As for Scott, having a huge television crew follow you around with huge cameras all day is no mean feat. If indeed this contributed to Scott leaving the show, it is totally understandable.

Finally, a few people have also speculated that after making the move to Tennessee, Scott managed to open his own car restoration business and auto shop.

Well, to be honest, this is our best theory so far. Having your own business and family nearby is the dream for many, and it should be good news for our boy Scott!

What Is Scott Up To Now?

Scott, like his co-star Roli, has a very private life. For one, he’s not active on social media. Sure, he has a Twitter account, but he’s not made a post in years. This makes it virtually impossible to keep tabs on him. However, there’s enough reason to believe that he’s home in Tennessee, running his own garage and watching over his family.

There you have it; the probable reasons why Scott is no longer on Counting Cars. Until we hear the actual version (preferable from the horse’s mouth), we are left with speculations.

Hopefully, nothing went wrong in the shop, and that Scott left to pursue his own interests and spend time with family.