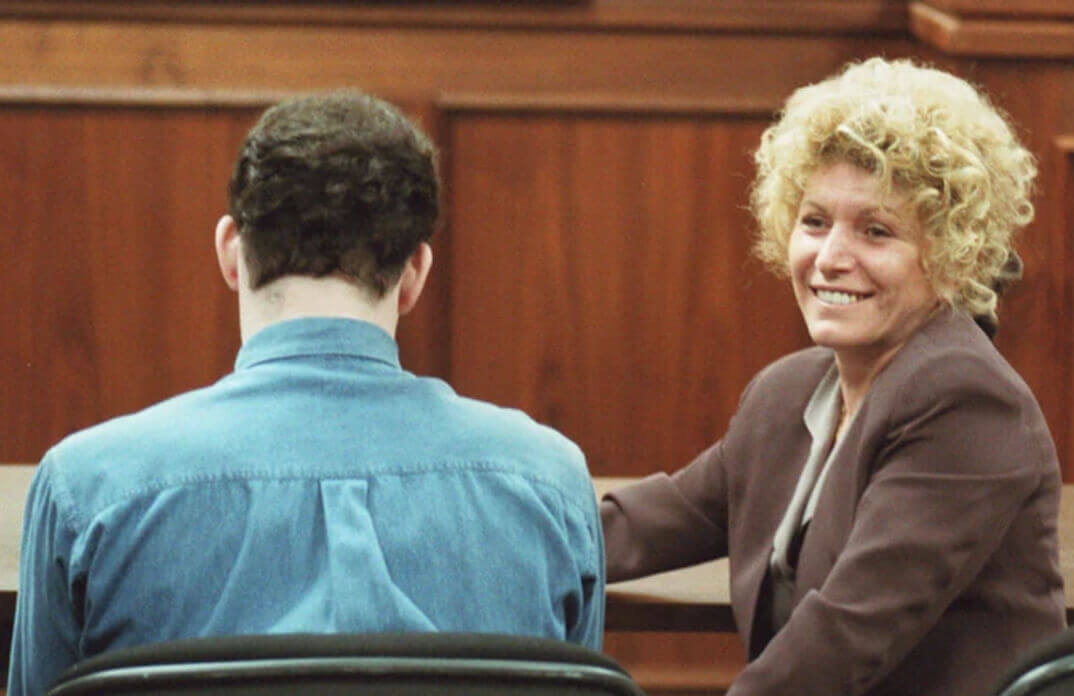 In the 90s, the Menendez brothers’ trial became a national media sensation.

It is hard to believe now, but there was a time when the whole world was rooting for the boys to get justice only because of how their defense attorney portrayed them.

Leslie had been described as a “4-foot-11, fire-eating, mud-slinging, nuclear-strength pain in the legal butt” by LA Times.

This description is enough to tell what kind of force she was in her heyday.

Abramson was famous for taking extremely complicated cases, and the Menendez brothers’ trial is proof of it.

Today’sToday’s generation has a newfound interest in the case after watching the episode about the murder of the Menendez parents on Law & Order: True Crimes. The case was already one of the most infamous scandals of its time, the only one surpassing it was the O.J. Simpson trial.

So when the trial began, it had gained quite an interest as it was a story tailor-made for a Hollywood film. Jose Menendez and Kitty Menendez were a wealthy couple of Southern California. They resided at the main family estate in Beverly Hills.

In 1989 they got murdered at their house, and in 1990, the case took a horrific turn when their sons Eric and Lyle Menendez were arrested for killing them.

Erik Menendez and Lyle Menendez’s tearful acting initially made people sympathize with them. But then the prosecutors talked about how the boys had recklessly spent their family fortune in such a short amount of time.

For the next five years, the case captivated millions of people from around the world. In their first trial, both juries couldn’t agree on their sentence; the women had bought into the narrative of their parents abusing them while the men were asking for strict punishment.

In the second trial, game-changing evidence of Eric’s confession of shooting his parents to death confirmed that the Menendez brothers had indeed killed their parents.

Eric had confessed to his psychologist as his guilt was eating him away, and that one major slip-up resulted in them getting life sentence without parole.

They got booked for double murder, and to this day, the Menendez brothers are serving in a San Diego jail. Earlier, the boys were put in separate prisons, but recently, ABC News reported that they had an emotional reunion.

Leslie Abramson’s Role In The Trial

Leslie was leading the defense team at the Menendez murder trial. This trial was the most memorable one in Leslie’s already remarkable career.

Before this, she had already been named trial lawyer of the year that too twice by L. A Criminal Courts Bar Association.

When she took the case in 1990, Abramson told the Washington Post that the boys’ action was just the result of years of psychological abuse.

Leslie’s defense argument in the whole case that the boys have been physically, emotionally, and sexually abused by their parents. She had made a compelling narrative and was successfully building her case around it.

Her story convinced the women jurors that the male jurors were asking for conviction, and the case got retried.

Leslie would have won that trial if only Erik Menendez had not made a direct confession before his psychologist Dr. William Vicary.

Even with such a twist, she argued that whatever Erik Menendez said came under doctor-client privilege. She filed a motion to revoke the court’s access to the psychologist’s notes, but it was dismissed.

Later, when the notes were handed over to the court, there was a controversy surrounding them.

The doctor claimed Leslie had asked him to get rid of 25 pages with important information and only complied because he was threatened. This had put Leslie’sLeslie’s reputation at stake, and she was on the verge of getting disbarred.

An investigation was started to confirm the evidence tampering allegations, but in February 1999, it was closed due to lack of evidence.

After the brothers got sentenced to life in prison, Leslie displayed outrage at the press conference held after the verdict.

She still stood by her conviction that the boys killed their parents only because they endured emotional and sexual abuse for years and thought this was the only way out.

Leslie had an illustrious career even before she represented the Menendez brothers. She held the title of the most successful defense lawyer for death-row cases.

Her skills were such that she could overturn the court’s decision of the death penalty. When she took over the infamous case that same year, she had won a case of a Pakistani-born gynecologist Dr. Khalid Parwez.

He was accused of killing and dismembering his 11-year-old son. Then, in 1988 she had won a case that was much similar to that of the Menendez brothers. A 17-year-old boy Arnel Salvatierra was found guilty of committing first-degree murder.

He got probation after Leslie proved that what he did was the result of child abuse. Although at her private practice, she had a rule for taking no prisoners case.

What Is Leslie Abramson Doing Now

After the  Menendez brothers’ trial ended, Leslie released a book in 1997 titled The Defense Is Ready: Life in the Trenches of Criminal Law. That book gave a rare insight into all of her famous trials and became one of the New York Times bestsellers.

In addition, it talked in detail about the abuse excuse she has used multiple times in her cases.

She once again came into the limelight in 2004 when she was hired by musician Phil Spector, accused of shooting the actress Lana Clarkson.

However, the disagreements between Abramson and Spector led to her resigning from the case. In 2009, Spector was eventually convicted.

Today Leslie lives a good retired life with her husband, Tim Rutten. Inherinterviewwith Vanity Fair Leslie told she has left behind the hustle that comes with taking difficult cases and lived in the outside area of Los Angeles.

Her home has a big enough garden where she grows different fruits and vegetables. She is a mother of two, one daughter from her first marriage, and has an adopted son.

She doesn’t take cases anymore, no matter how exciting they are, but she does teach the other current generation about the law when she delivers talks at conferences and seminars.