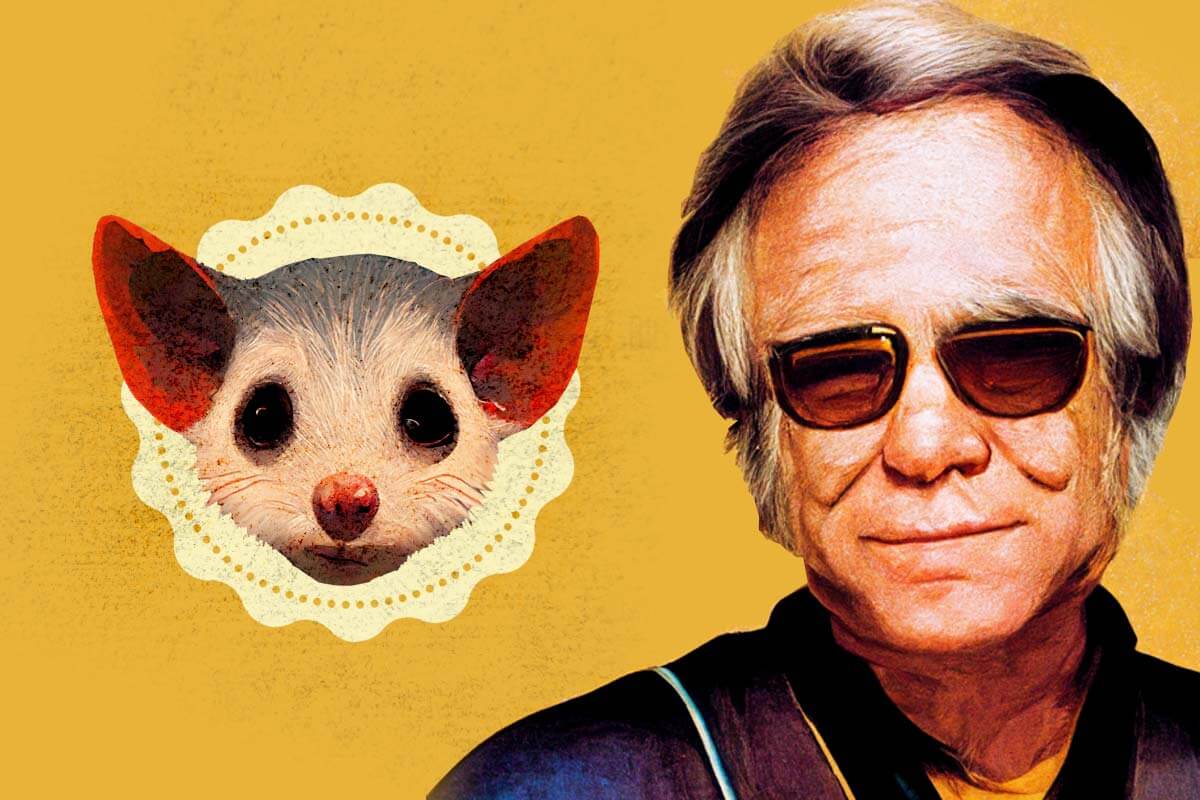 If you are a classic country music fan, George Jones is probably at the top of the list of the best country entertainers.

Much was going for the country music hall-of-famer, from his much-publicized relationship with fellow music star Tammy Wynette to his impeccable music career and, of course, his distinct nicknames, the most popular being The Possum.

It’s interesting how someone so famous would earn such a silly nickname for himself. Read on to learn why George Jones was called The Possum.

What Happened To George Jones?

Johnny Cash friend George Jones was a long-serving country legend, aptly recognized as the greatest living county musician when he was still alive.

Jones passed away on April 26, 2018, aged 81, after being hospitalized for a week for irregular blood pressure and fever.

Known for hits such as He Stopped Loving Her Today, The Grand Tour, She Still Thinks I Care, Tender Years, Walk Through This World With Me, and so many others, Jones won numerous Country Music Association awards.

In 1980 he won the award for best male vocal and top single vocalist, and in 1981 scooped a Grammy for best male country vocal performance. He was inducted into the Country Music Hall of Fame in 1992.

Jones started singing in the streets of Beaumont as a teenager, where he’d earn tips. He also served in the U.S. Marine Corps, after which he returned home and began recording for the Starday music label based in Houston.

The country music star secured his first number-one hit, White Lightning, in 1959, and this is often seen as the start of new beginnings in his super-successful music career.

Why Was George Jones Called The Possum

An Opossum is a small, furry marsupial with inset eyes and a somewhat tiny, pulled-together face. George Jones earned the shortened version of the name, Opossum, and fans, family, and friends fondly knew him as The Possum.

In an interview, the country artist explained how the nickname came to be. “Tommy Cutrer and Ralph Emery, a disc jockey, started calling me The Possum.”

“I had released an album, and I was posed in a side view with a crew cut. My nose appeared as though it was pointing up. I was very young with my little beady eyes, so I guess I looked like a possum,” he added.

“They (Turner and Ralph) laid into me and began calling me Possum, so the name got everywhere. There was no stopping that, so I thought I will have to live with it, ” he recalled laughing.

So, the reason George Jones was called The Possum was a play on his looks. According to him, his friends thought he looked like a possum, so the fond nickname stuck.

The favorite country singer fully embraced his nickname, so much that he opened a club in Nashville and named it Possum Holler.

The club opened its doors in 1967 after the country music star moved to Nashville. The hub was located along the renowned Broadway Street right across Ernest Tubb’s record-selling shop and next to the popular Ryman Auditorium, Tootsie’s bar.

Legend has it that the Possum Holler was a buzzy meeting spot for famous and budding country music singers in Tennessee. Jone’s band, The Jones Boys, was the default house band; whenever they weren’t on tour, revellers would have access to a world-class band.

Big stars in the country scene, such as Dolly Parton, Kris Kristofferson, and Merle Haggard, were regulars at Possum Holler. Unfortunately, the building’s owner shut down the famous club after a maintenance dispute.

George went on to open a string of theme parks and entertainment venues. But, many say that none of those came close to Possum Holler.

Why Do They Call George Jones No Show Jones?

Country music star George Jones made peace with his Possum nickname, but he had other nicknames he wasn’t so proud of. For example, fans and those close to him also knew him as No Show Jones.

“No Show Jones- I never liked the name. But, I made peace with it and even played around it with a song. I didn’t think I would ever shake it away, but things have gotten so much better,” he said in an interview.

Jones earned the sinister nickname for his habit of failing to show up to some of his concerts because of his drinking problem and excessive partying.

“I often think about the shows I missed. I would see those daddies, mamas, and some grandkids walk down the old country dirt road, walking a mile to town. They’ve been saving money for months only to get there and be disappointed,” he recalled.

“I guess that hurts me more than anything else. But, nobody calls me ‘No Show Jones’ any more,” he reflected.

What Was Tammy Wynette’s Nickname?

We can’t speak about George Jones without bringing up Tammy Wynette. Wynette, a country music star in her own right, had an incredibly tumultuous marriage with Jones.

The two married in 1969 and were divorced by 1975. George and Tammy shared a daughter Tamala Georgette, whom they had a year after getting married. But, even that could not hold together their stormy marriage caused majorly by Jone’s alcoholism.

On a lighter note, like her ex-husband, Wynette, too, had several nicknames. The most famous was The First Lady of Country Music and the Heroin of Heartache.

The First Lady of Country Music nickname came about because Tammy was the first female country musician to sell one million copies of an album, Tammy’s Greatest Hits (1970).

The Heroine of Heartache is not such a flowery nickname, but it suited Tammy due to her aching and vulnerable singing voice. She sang a lot about divorce, passion, parenting and loneliness and many women resonated with her teary voice and themes of heartbreak and struggle.

After a lifetime of heartbreak, addiction to pain medicine, health problems, and drama, Tammy died on April 6, 1998, at age 55.