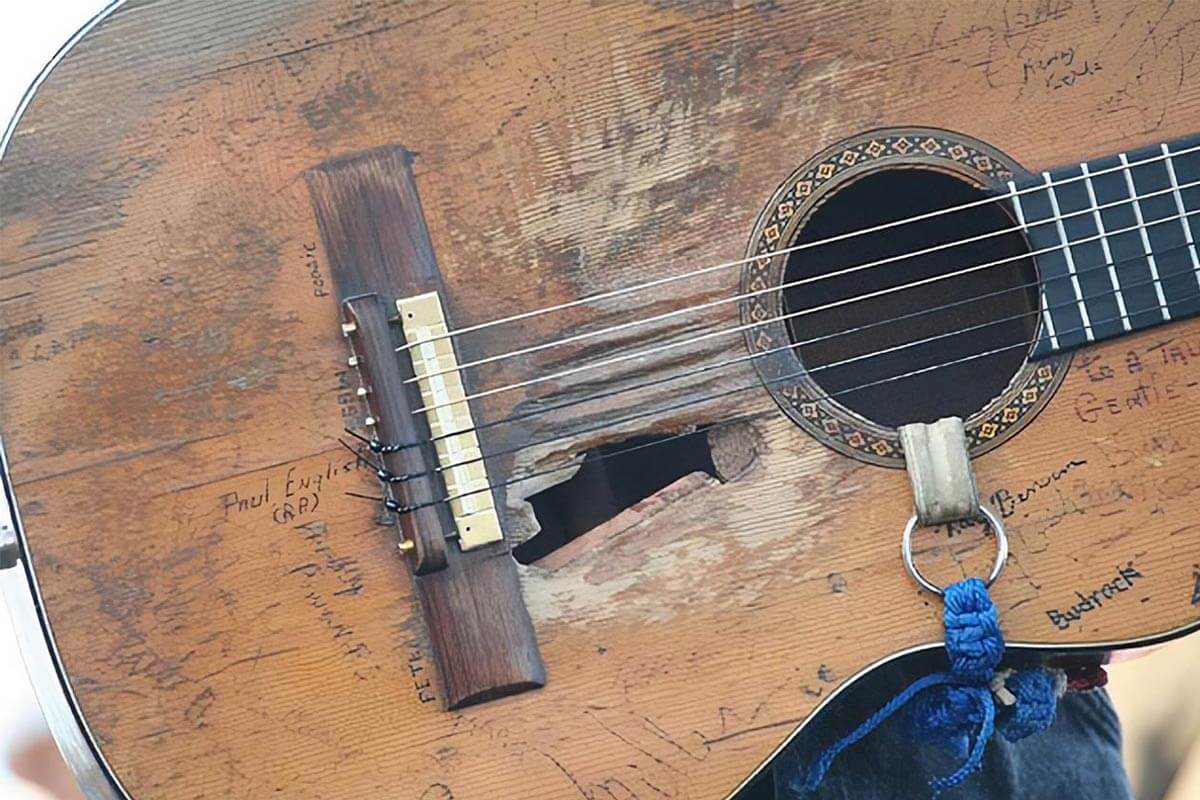 Willie Nelson is an iconic American musician, singer, songwriter, and actor. He has been performing and recording music for over six decades and is known for his distinctive voice and guitar-playing style.

Some of his famous songs include “On the Road Again,” “Always on My Mind,” and “Crazy.”

His iconic acoustic guitar, Trigger, has been a constant companion of Nelson since it was produced in the late 1960s. Trigger is a Martin N-20 nylon-string acoustic with the serial number 242830 and was brand-new when Nelson obtained it in 1969.

It all began when a drunkard between his sets at the John T. Floore Country Store stepped on his beloved Baldwin 800C acoustic.

Willie took his broken Baldwin to luthier Shot Jackson, who sold him a brand-new Martin N-20 with the Baldwin’s PrismaTone and preamp installed.

Nelson was initially set on having his Baldwin company guitar fixed but quickly realized that this replacement would get him closer to sounding like his idol, Django Reinhardt.

During France’s Nazi occupation, the Belgian -born jazz guitarist was known for his unique playing style and use of a nylon-string instrument, enjoying the admiration of many guitar players at the time. Nelson was likely introduced to Django Reinhardt’s playing style by guitarist Oliver English.

So, the decision was made in Trigger’s favor, and the rest is Country music history.

Why did Willie Nelson name his guitar Trigger?

Willie Nelson named his guitar Trigger after Roy Rogers’ horse of the same name. He was a fan of the cowboy singer and actor and wanted to pay homage to him by naming his guitar after the horse.

The name also reflects Willie’s independent spirit and resilience, as Trigger is an iconic symbol of freedom and adventure. Willie has said that he feels a special connection with Trigger and that it is like an old friend.

The name didn’t stick right away, however. Nelson only named the instrument years after the purchase.

Fan fact: Did you know that Nelson once rescued Trigger from his burning house, along with his beloved stash of pot?

The sound of Trigger

Trigger is known for its unique sound. This type of guitar has a Sitka spruce top, Brazilian Rosewood back and sides, and a mahogany neck. The fretboard and bridge are made of ebony.

The blend of tonewoods gives the guitar its warm, mellow sound.

Now add Nelson’s unique and distinctive guitar-playing style. He often uses a fingerpicking technique, which involves plucking the strings with his fingers instead of a pick.

This gives his music a more mellow and intimate sound. He also often incorporates double stops or two notes played simultaneously in his solos.

How much did Nelson pay for Trigger?

When Willie Nelson purchased Trigger in 1969, he paid $750 for the Martin N-20 nylon-string acoustic, a significant sum of money at the time. This was the equivalent of $5,600 in today’s money!

How much is Trigger worth today?

Trigger is now an iconic piece of musical history, and its value has increased significantly over the years. It is estimated that Trigger is worth around $1,000,000 today, making it one of the most valuable guitars in existence.

The guitar has been featured in numerous documentaries and exhibitions and even has its own website dedicated to its history. Willie Nelson himself has said that he would never sell Trigger, as it has become a part of his identity.

A lifetime on the road has left scars on Trigger. The frets are all original but have worn down, meaning some notes thump or buzz, and there is a hole worn through near the bridge.

Willie has not allowed any modifications that might make the guitar more “player friendly,” as he does not like change. As a result, Trigger has become a part of Willie’s signature sound.

It was the Martin Guitar Company that made a Willie Nelson signature guitar in the late 1990s called the N-20WN, a limited edition model. A total of thirty guitars were made with the original Brazilian Rosewood, and the rest were made with East Indian Rosewood.

Does Willie Nelson use any other guitars aside from Trigger?

Nelson’s primary guitar is Trigger, but if he does break a string during a performance, his backup guitar makes an appearance.

When the damaged string is swapped out, Trigger is quickly placed back where it belongs – in Willie’s hands.

Willie Nelson has made several modifications to Trigger over the years, including a new bridge and saddle, a pickup system, and an extra strap button on the neck heel. He also had the guitar’s top refinished in black lacquer.

If this article hasn’t satisfied your curiosity about Willie Nelson’s guitar, take a look at this Rolling Stone documentary:

Trigger is a reminder of Willie Nelson’s incredible career and his commitment to his craft.

It is an iconic symbol of the man and his music and will continue to be a part of Willie’s legacy for years to come.