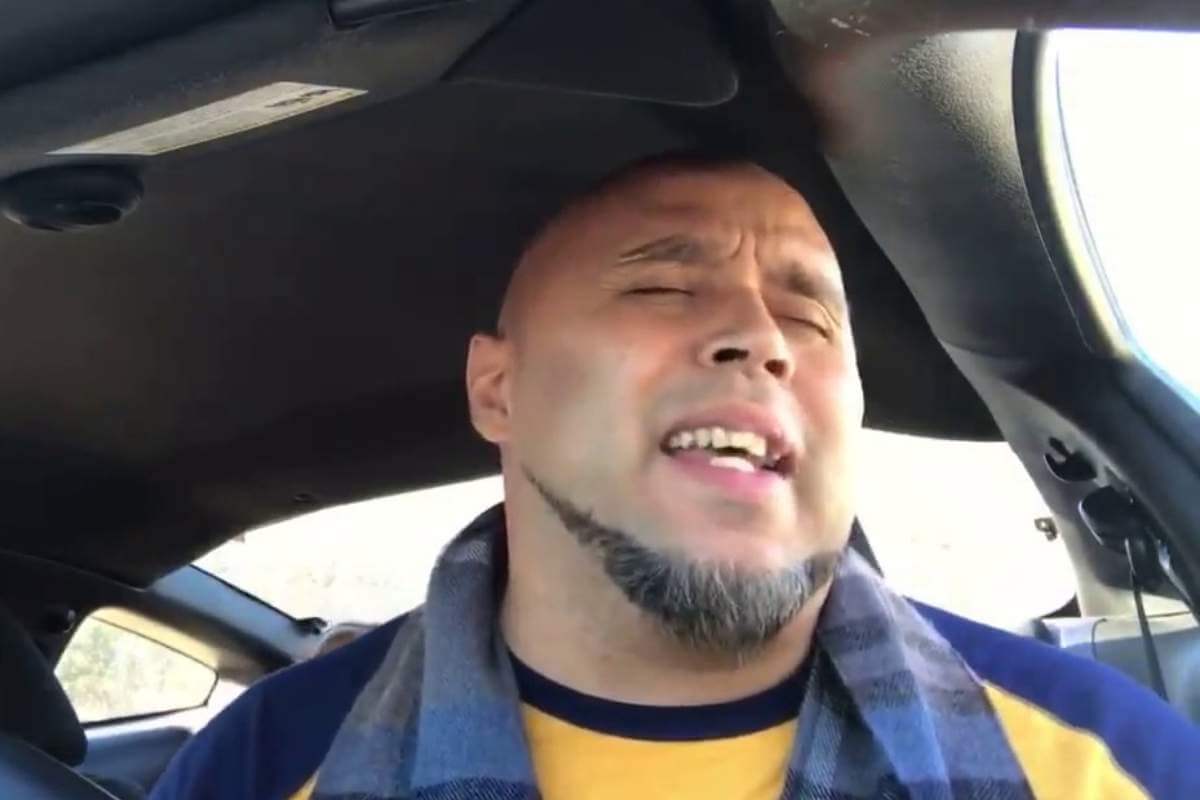 Sometimes life turns around when you least expect it. That’s exactly what happened to viral country music star Kris Jones, aka the Tennessee Whiskey dad.

The Alvarado father was already two years shy of turning 40 when the lucky stars of fame shone upon him after many years of trying to make it in the music industry.

Kris’s wife played a big role in catapulting her husband to fame. We don’t see her much, even when Kris’s fame was at its peak, but she was a force to reckon with behind the scenes.

So, what happened to Kris Jones’s wife after the viral fame of his Charles Stapelton cover? Read on for the insider details!

Why Is Kris Jones Famous?

Kris Jones, the Tennesse Whiskey dad, wasn’t always famous, and the truth is, he had very little chance of making it in the music scene.

Born and raised in Forth Worth, Texas, Kris is the youngest of five siblings born of a white mother and black father. According to the singer, he had shown interest in singing since he was 10, but his mother refused for a time to sing in the church choir until he was an adult.

His parents split up when he was young. But his father continued to pick him up and drive him to karaoke competitions on the weekends, with his favorite artists being Michael Jackson and R. Kelly.

Being a mixed child, Jones says he always felt out of place and was occasionally bullied, but music was always his solace.

Kris was just a hardworking dad and husband who became famous after his daughter Dayla recorded him belting out Chris Stapleton’s Tennessee Whiskey in their 1999 Dodge Ram pickup truck.

All Jones did was do his favorite thing: sing. His wife and daughter would then accidentally make him a viral sensation, with everyone from The Voice to Ellen of the Ellen DeGeneres Show wanting a piece of him.

Kris Jones’s Wife Moved On When He Went To Prison

Kris and Destinie, who would be his future wife, met when they were just 16. Kris and a friend went to a karaoke bar on a blind date, but Kris quickly took to liking his friend’s date.

On their date, he went on stage and sang ”Only You” by the Platters, and according to Kris, he stared right at Destinie when he sang the line, ”You are my destiny.” They started dating one month later but broke up soon after Kris was sent to prison for a serious crime.

Kris had dropped out of school at age fourteen and began doing odd jobs. He moved out of his mum’s house at 17 but soon fell in with the wrong crowd and was convicted of aggravated assault with a deadly weapon. He lost his chance at probation and ended up spending six years in and out of prison.

Destinie moved on and even had two children of her own, Traelon and Dayla. But Kris never forgot about her. As soon as he left prison, he got a job with a moving company and started earning a steady income.

He also felt ready to reach out to Destinie, newly single. The former lovebirds spoke again after six years, rekindled their love, and married within eight months.

Even though Kris managed to turn his life around, he recalls having a hard time in prison due to being of a mixed race. “I looked Hispanic, but I am not. I was either too white or too black for the gangs, and the only time I was at peace was at night when I would stand at my cell’s locked door and sing.”

The inmates and guards loved his singing, with Brian McKnight, R. Kelly, and Garth Brooks being popular requests. Throughout his time, he dreamed of performing in front of a real crowd of fans and the entire shebang, including cameras, lights, pictures, and autographs.

Kris Tried America’s Got Talent and The Voice But Failed

Before the viral fame, Kris had been trying to pursue music and had even spent money in studios recording R&B. But, not much came out of it. Besides, his family obligations were more important, and he decided to put his music pursuits aside to care for his young family. Kris also brought Crista, his child from another relationship, into the family.

Destinie was instrumental in keeping Kris’s dream alive. She pushed him to audition for American Idol in 2009 and even went to stand in line with him at the AT&T stadium in their hometown of Arlington. Although the judges liked his voice, Kris was 31, a little past the cutoff age of 28 years.

Kris auditioned for The Voice in 2012 for another shot at pursuing his musical dream. He had intended to show off his range by singing Brian McKnight’s “Back at One”, one of his favorite melodies during his time in prison.

He figured that the falsetto in McKnight’s song would help him impress the judges, but unfortunately, the judges turned Kris down as soon as he opened his mouth.

And that was that for the aspiring country music singer. Or so he thought.

One day on a trip to Home Depot, Kris’s eldest daughter, Dayla, asked him to sing Chris Stapleton’s popular cover “Tennessee Whiskey” while she recorded him. She wanted to show off her dad’s amazing voice to her friends.

Tired from work with paint on his shirt and beard, Kris still managed to belt out the most beautiful rendition of “Tennesee Whiskey,” a fete that would earn him the endearing title of Tennesee Whiskey Dad.

Dayla sent the video to her friend and, later that evening, showed it to her mom. That was supposed to be it, but Destinie decided to post the video on her Facebook page on New Year’s Day of 2017.

“I need to make my hubs famous,” she captioned her video post. Within a few hours, the video had attracted more than 2,000 views. The views grew to 100,000 and then to over 6 million in just four days. Dayla posted the video to YouTube, attracting more than 3.5 million views.

Kris’s’video had gone viral, and Destinie went ahead and created a Facebook fan page where she even left her phone number. Needless to say, her phone started blowing up with people from all over the country calling in with an opportunity for Kris.

The Voice even invited Kris for an audition, but he turned it down as it wasn’t a good time for him. He did appear on several radio and TV interviews, including the Ellen Degeneres show.

Where is Kris Jones Now?

Despite his viral fame, Kris Jones did not become the big-time country music star he had hoped to be.

When the video of him signing to Dayla went viral, everyone wanted a piece of him, but it looks like those opportunities did not amount to much.

That said, Jones released his self-titled EP in March 2018. But since then, he hasn’t publicly released any music.

As to what happened to Kris Jones’s wife, she is still married to him, and they are going strong, caring for their family. We certainly wish them the best of luck!