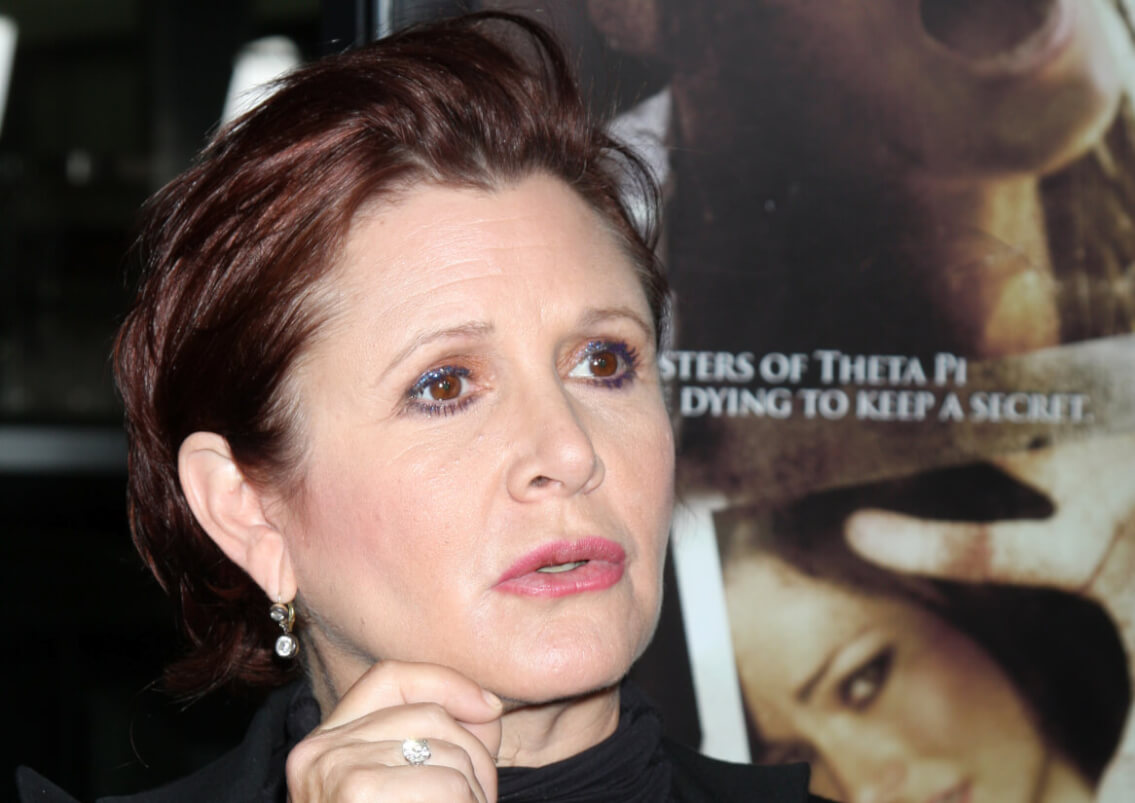 Carrie Fisher was a big name in Hollywood. If you watched the Star Wars prequel trilogy (the first three movies in the franchise), the celebrity certainly needs no introduction. She’s known by many as Princess Lea in the famous space movie series.

Carrie wowed fans with her acting prowess that started in the late 1970s and went all the way to 2008.

George Lucas, the creator of Star Wars, says that Fisher “will always be the beautiful princess who took command and never ever surrendered. She never found herself in jeopardy. On the contrary, she always helped others get out of tricky situations. We will all love her forever and ever.”

Fisher was only 19 when she joined Star Wars and was around for some time before moving to other films, including Soapdish, Hannah and Her sisters, Blues Brothers, The Women, When Harry Met Sally, The ‘Burbs, and Shampoo.

Her works on television earned her nominations for Saturn Awards and Primetime Emmy Awards. She also received a Grammy Award for Best Spoken Word Album.

The amazing Carrie Fisher story dates back to October 21, 1956, when the Hollywood beauty was born to her famous parents, actress, and singer Debbie Reynolds and pop singer Eddie Fisher.

Debbie is famous for her 1952 breakout role – Singing’ in the Rain. Many people would imagine that being born to two of America’s famous names is sheer luck, but Fisher felt otherwise.

She has authored a total of seven books and dropped an autobiography, which details her difficult Hollywood upbringing.

Her parents separated when she was only two years old. Her dad married Todd Taylor’s widow, Elizabeth Taylor, leaving her and mommy to carry on by themselves.

Debbie was always moving homes to act, give an interview, sing, or promote her books. Carrie was forced to follow her around. That meant she couldn’t gain true friends of her own as a child.

Her movie-star mother was always working, leaving her grandma and nanny to tend to her. She says that she felt like Debbie’ belonged to the world” and that she “didn’t like sharing her.”

Fisher made her debut in the spotlight at the tender age of 13, where she performed a song alongside her mum in a New York nightclub.

Although she attended Beverly Hills High School until the age of 16, she made her Broadway debut as a debutante and singer in the hit Broadway revival Irene (1973), starring her famous mother.

Her Hollywood career then kicked off in 1975 when she took up Lorna Karpf’s role in Shampoo. Fisher was only 17 by then. In 1977, she moved to Star Wars, which was the breakout role for her.

What Happened To Her Voice?

Anyone that has been following the acting career of Carrie Fisher knows that her voice has undergone major changes over the years.

When she starred in the original Star Wars movie, the A-lister had a sweet, innocent, and clear voice. She was practically a teenager. By the time she made a comeback on The Return of Jedi, things had changed.

Her once smooth and clear voice seemed raspy, broken, and downright rough. You don’t need to watch all the scenes in the movie to note this. Just what happened?

Unfortunately, Fisher has never clarified what her vocal cords have gone through over the years. However, some reports name her struggles with drugs as a possible cause.

The actress has never shied away from sharing her struggle with drug addiction, alcohol abuse, and mental illness.

According to her Wishful Drinking Memoir, Fisher was diagnosed with bipolar disorder when she was a young girl. Having to live with mental illness can take a toll on anyone’s life. To mask the issue, Fisher found herself using hard drugs such as cocaine and heroin.

She once overdosed on opioids and had to be rushed to the emergency room to have her stomach pumped. The operation was done in a private room, and no media outlet caught wind of the story.

Fisher herself detailed the events to help others who are going through the same. Although the beauty has not been open to what happened to her voice, it is clear that drug use had a lot to do with it.

Carrie Fisher had just finished doing her book tour in Europe and was headed back to LA (on December 23, 2016) when she suffered a heart attack fifteen minutes before touch down.

She was rushed to the hospital, put on a ventilator, but sadly, she passed away four days later. She was exactly 60 years old when she breathed her last.

Although the cause of death was originally listed as cardiac arrest due to chronic sleep apnea, traces of cocaine, heroin, and other opiates were found in her body.

Her mother, Debbie Reynolds, sadly also passed away a day after her daughter.

Carrie is survived by her daughter, Billie Lourd, another famous name in Hollywood. Billie has starred in movies such as Scream Queens and American Horror Story.

Hollywood characters seem to have it all. Well, at least according to many of us out here.

However, when you read stories like Carrie Fisher’s, you are forced to rethink this statement. We can only hope that Billie will learn a lesson or two from her mom’s story.