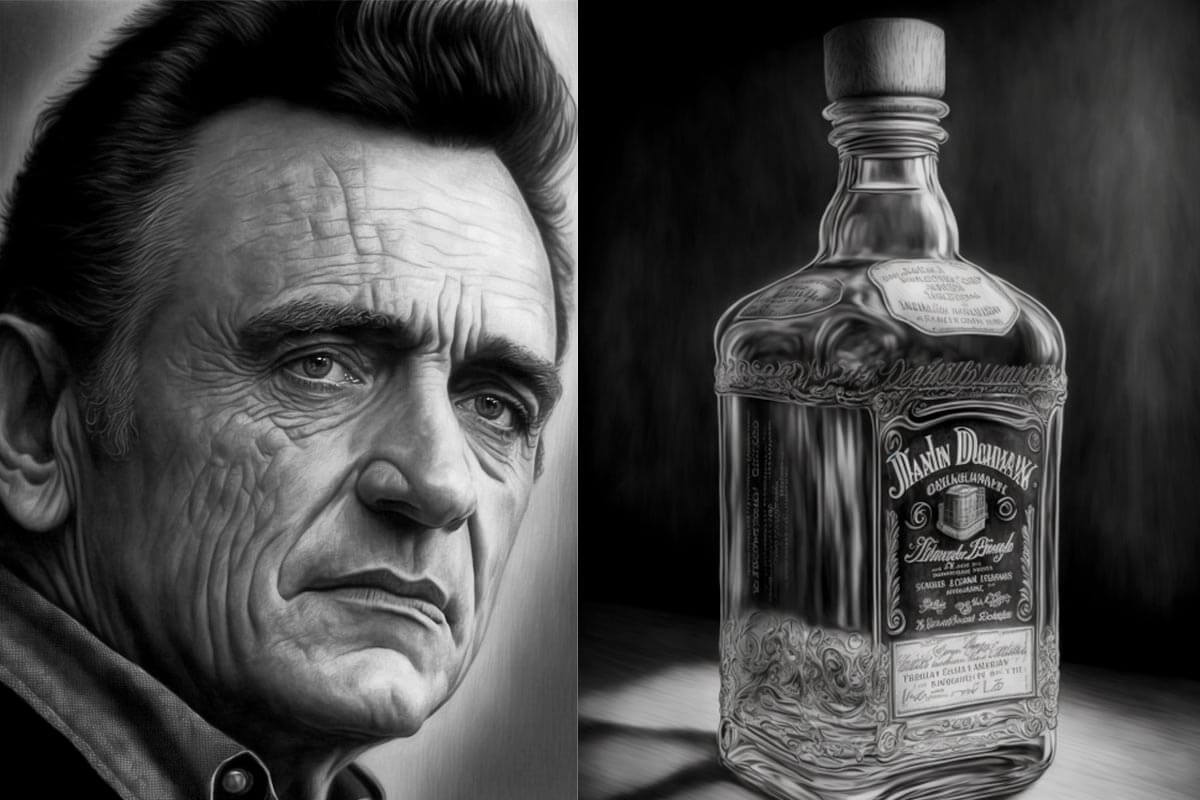 To the adoring fans, Johnny Cash’s life was perfect– fame, a nice family, wealth, great friends, and access to echelons of power the rest of us can only dream of.

But, behind the scenes, The Man in Black was fighting a vicious battle with drugs and alcohol. The media touched a bit on Johnny Cash’s drug problem, but those close to him say productions such as the biopic, Walk The Line do not reveal the real truth about the depth of the musician’s woes with addiction.

Here is the insider story of Johnny Cash and his struggles with drug addiction.

Johnny Cash: The Rise of a Country Music Superstar

Johnny Cash took an interest in music from an early age, but neither he nor his parents would have predicted that he would become one of America’s most successful and beloved country musicians.

When Cash was three years old, his family moved to Dyess, Arkansas, through a scheme that allowed low-income families to till a piece of land they may own later.

According to the Cry! Cry! Cry! musician, he began working in the cotton fields with his family when he was five years old. Cash recalls their farm getting flooded by rain, to which he penned the song, Five Feet High and Rising.

His experience of coming from a poor family and struggling inspired many of Johnny’s songs, some of which became record hits.

Cash’s childhood was filled with gospel music, and listening to the radio was a constant fixation in their household. The country music star learned guitar from his mother and a friend, a skill he picked up quickly and began composing songs at 12 years.

Many years later, he released an album entitled, My Mother’s Hymn Book as a tribute to his mother’s influence on his musical career.

Johnny Cash Lost His Older Brother and Dug His Grave

Early experiences shape us and influence who we become later in life. This could not be truer for Johnny Cash’s life.

In addition to experiencing poverty as a child, Johnny had to deal with the trauma of losing his elder brother, Jack. Jack was almost cut in half by an unmanned power saw while at work and succumbed to his injuries two weeks later.

Johnny had to help his father dig the grave in which they buried Jack, with whom they shared a close relationship. Legend has it that Johnny stood covered in dirt throughout the funeral service, and this incident scarred him for life.

He was never the same after that, and this harrowing experience probably contributed to his drug problem later in life.

According to the crooner’s biography, he, his brother and his mother all had weird premonitions on the day Jack’s accident happened. In fact, his mother even asked Jack not to go to work and to accompany Johnny on a fishing trip instead, but Jack was adamant about working to bring the money the family desperately needed.

After Jack’s death, Cash was left with so much guilt, a feeling he carried into adulthood and may have been the source of his demons.

Like most 18 years of his time, Cash enrolled to join the army in 1950. He obtained basic training at the Lackland Air Force Base. Cash attended the Brooks Air Force Base in San Antonio, Texas, for technical training and was later attached to the 12th Radio Squadron Mobile of the Airforce and transferred to Landsberg, Germany.

Johnny Cash served in the Air Force from 1950 to 1954, rising through the ranks to become a Staff Sergeant and working as a Morse Code operator. When his contract ended, Cash was discharged honourably.

When he returned to Texas after his discharge from the Air Force, Cash launched a career as a salesman while studying to be a radio announcer. But he also did not let his dream of becoming a music superstar die and continued to find opportunities to pursue his musical career.

Cash’s career finally began taking off in the mid to late 1950s. Unfortunately, the taste of success marked the start of a drug problem that would spiral out of control, causing the crooner many near-death experiences.

Typical of a famous musician’s lifestyle, Johnny Cash was on tour a lot and had a rigorous performance schedule requiring him to show up at events at a moment’s notice.

Cash began drinking heavily and started using barbiturates and amphetamines to improve his productivity, help him calm down, and give him just enough buzz to entertain the huge crowds that often attended his concerts.

“We recorded more (with Sun Records), went on the road and became known, and in the 1960s, we were famous enough to organize a show of our own. Then I started doing even more pills, ” Cash recalled.

He added, “By 1967 I neared a nervous breakdown. I would pop a hundred pills daily, but I got neither peace nor pleasure. I could not stand my life, but there was no way out of it.”

Johnny Cash Broke Into A Friend’s Car For Drugs

For a time, Johnny Cash went to live with a friend, Waylon Jennings, in Nashville. At this point, the country music star had stopped going home to his wife, Vivian Liberto and their kids.

Living with Jennings was bad news, given that his friend was addicted to amphetamines too. Cash recalls that one day, he ran out of supplies but knew his friend had some left in the car. Jennings was asleep, and since Cash could not find his car keys, he broke into the car to get the pills.

”He later accused me of this, but I completely denied it; we almost got into a physical altercation. I knew he knew that I was lying, and the next day when I admitted it, he said it was OK and that he understood. We were like two children, forgiving each other but too cowardly and afraid of the dark.”

In it, she documents a time when Cash crushed June’s Cardillac into a phone pole and was refused treatment by doctors who termed him as ”bad news.”

In another horrifying incident, Cash’s manager, Saul Holiff, recalled finding Cash passed out on the floor of his hotel room in Toronto from a drug overdose a few hours before a performance. Holiff had to carry his client to the emergency room and then dragged him to the microphone for his performance.

Holiff recorded audio and written diaries of his time with Johnny Cash. In one entry, revealed in Chadwick’s book, Holiff notes how one time Cash went MIA and missed a whole 10-day tour, leaving his manager to look for him desperately.

The next time he had about his client was ten days later when June Carter called him from a hospital saying Cash had fallen sick. Needless to say, Cash left Holiff to deal with the financial and public relations catastrophe that followed after the musician missed his tour.

Johnny Cash Managed To Deliver Despite His Drug Use

When he was at the peak of his drug abuse, his friends noticed the extreme changes in his behaviour. He became more irritable, nervous, and erratic, but those close to him joked about it and told him to slow down and get more rest, ignoring the signs of his spiralling struggles with addiction.

Interestingly, the country music legend maintained his usual high level of productivity in his music career and continued to deliver hit after hit despite his addiction to drugs and alcohol.

Notably, at the height of his drug addiction, Cash did the Ring of Fire rendition, which June’s sister first performed. Ring of Fire went on to become a multiple-hit song topping the country charts and pop charts.

His hit song, Jackson, which he performed alongside June Carter, won a Grammy Award in 1967.

According to his manager Saul Holiff, Johnny Cash’s addiction spiralled so out of control that he often found the musician passed out on the floor of his camper van from where he would have to collect him.

In one incident in 1965, a fire started in Johnny’s camper during a trip to the Los Padres National Forest in California. According to Damon Fielder, Cash’s nephew, whom he was with on the trip, Cash started a fire to keep warm, but because he was too drunk, he did not notice the fire spreading and getting out of control.

On the other hand, Cash claimed that a defective exhaust system aboard his camper caused the fire.

The fire spread across several hundred acres of property, burning everything in its way. In total, the forest fire Cash started in his stupor burned down 508 acres, scared away the condor birds in the national forest, and stripped the foliage on three mountains.

Cash was arrested and presented in court for destruction concerning the camper fire, but he was so drugged out that he did not express any remorse for the accident, telling the judge it was not his fault but that of his truck.

The federal government sued him for $125,172, but the country music star settled out of the court and instead settled to pay $82001.

So bad was Cash’s addiction to painkillers and anti-depressants that he was willing to do the craziest stuff to get his pills. In one incident, a U.S. narcotics squad intercepted the country singer in El Paso, Texas.

The officers initially thought that Cash was smuggling heroin from Mexico. Instead, they found 688 capsules of Dexedrine and 475 capsules of Equanil hidden in a guitar case. Lucky for him, he was released from custody on a $1500 bond, and the judge slapped him with a year-long suspended sentence.

Cash had hit a new low with his destructive behaviour.

“I knew I was killing myself. Sometimes, I was too sick to work and other times I did not even show up. Not too long, booking agents stopped risking their money on me but even though his mean a loss, I didn’t care about anything,” he said in an a past interview.

Aside from the El Paso incident, Cash was arrested numerous times but funny enough he never stayed in jail for more than a night.

In 1967, the country music star was arrested in Walker County, Georgia, after he got into a car accident and police found an entire bag of prescription pills inside his vehicle. To make matters worse, Cash tried bribing a local officer, who turned down the bribe and instead sent him to jail for the night.

In a past interview, Cash recalled, “I had been taking the pills for a while, and then the pills started taking me.” His drug addiction had become so bad that June Carter, and her siblings, Maybelle and Ezra, moved into Johnny’s house to monitor and help him stop abusing drugs.

As part of his efforts to turn over a new leaf, Cash took an altar call in 1968 and rediscovered his faith as a Christian. But, it wasn’t until 1970 that the country entertainer stopped all drug use, staying sober for seven years. The birth of his son with June Carter, John Carter Cash, motivated him to keep off the drugs.

Unfortunately, Johnny Cash’s drug addiction caught up with him; he backslid and resumed using amphetamines in 1977, and by the early 1980s, he was knee-deep into his addiction.

Cash checked himself into several treatment facilities, including the Betty Ford Clinic in 1983 and the Nashville Cumberland Heights Alcohol and Drug Treatment Center in 1989. In 1992, after staying off drugs for a few years, the popular musician backslid again and sought treatment at the Loma Linda Behavioral Medicine Center, California.

Johnny Cash struggled with drug addiction even toward the end of his life. He passed away on September 12, 2003, aged 71, while hospitalized at the Baptist Hospital in Nashville after suffering complications from diabetes.