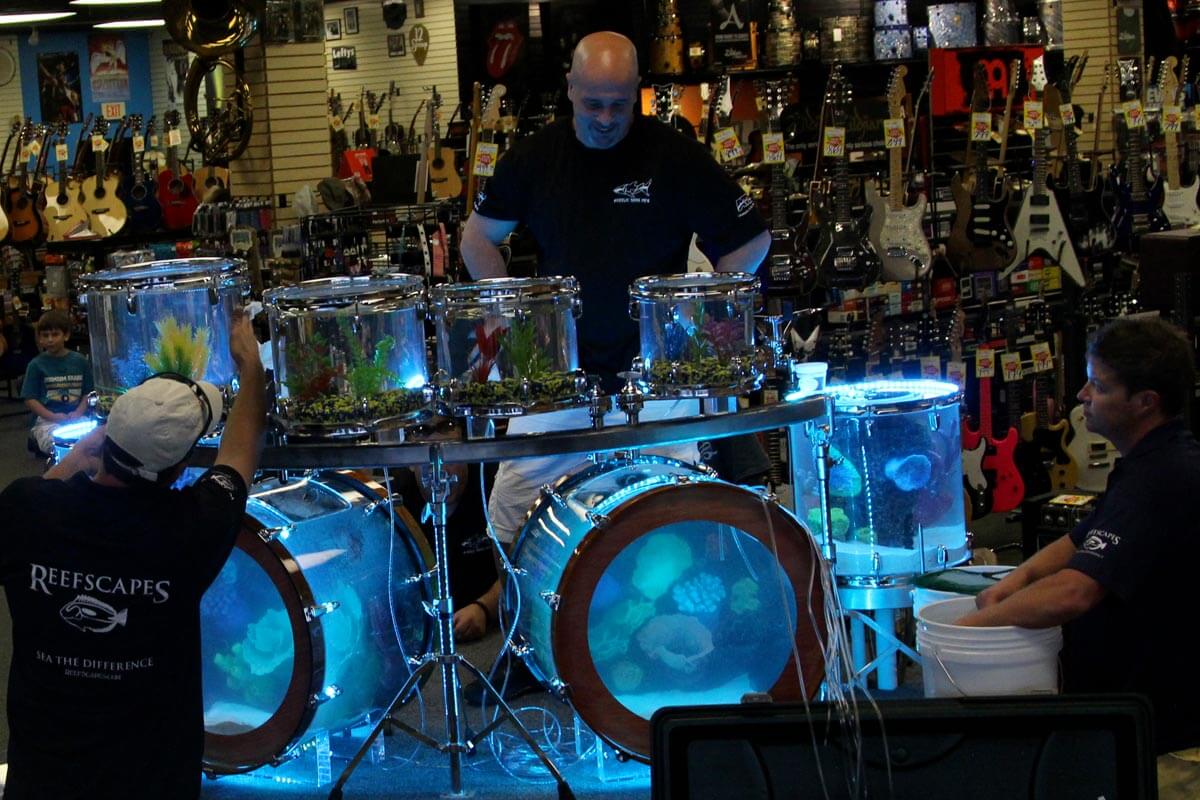 Have you ever watched a show that combines creativity and fish tanks?

If so, you’ve probably seen Tanked, Animal Planet’s hit show. This series aired between 2011 and 2018 and followed the operations of the Las Vegas-based aquarium manufacturer, Acrylic Tank Manufacturing (ATM).

In each episode, the company’s owners, Wayde King and Brett Raymer, and their staff would create unique and custom-built aquariums for different clients.

Fans of the show watched as they upcycled all kinds of items into incredible works of art.

They’ve done everything from a restaurant-themed tank to one featuring a shark! Taking it one step further, they even created an eight-piece drum set fish tank that is fully playable.

Let’s take a look at how it came to be.

Wayde & Brett: The Creators of the Drum Kit Tank

Wayde King and Brett Raymer, the stars of the reality show Tanked, were no strangers to taking on unique and challenging projects.

The duo had a knack for creating outrageous tanks for their clients and never shied away from a challenge. This was certainly true when a client, Blues Angel Music, requested an 8-piece drum set tank that was fully playable.

Brett & Wayde rose to the occasion, designing and constructing a drum set fish tank that was both functional as an aquarium and a musical instrument.

They faced several challenges along the way, from finding the right materials to ensure the aquarium was safe for aquatic life to ensuring all eight pieces of the drum set were just right for musical performance.

In the end, the pair delivered a finished product that exceeded their client’s expectations—and looked amazing, too!

The Construction and Installation of the Drum Set Fish Tank

The construction and installation of the drum set fish tank was no small task. Wayde and Brett had to carefully measure the tank’s dimensions, cut and shape the acrylic, and then install all necessary components, such as the pipes, filters, and pumps.

Then, they had to ensure that all components worked together to create a functioning and safe aquarium.

The team also had to ensure that the drum set was securely attached to the tank and that it could be played without damaging the fish or the tank itself. After completing all of this hard work, Wayde and Brett could finally see their incredible creation in action!

The aquarium featured on the show wasn’t just any ordinary fish tank but a fully functional drum, cymbals, and all. The massive drum kit was made using a Yamaha kit that boasted eight drums.

In addition, the tank was equipped with a powerful filtration system and LED lighting in keeping with the music store’s “Blue(s)” theme.

The incredible feat of engineering and creativity was made possible by the team at Acrylic Tank Manufacturing and is surely one of the most unique tanks ever seen on television.

The process of creating the drum set fish tank was no easy feat. Wayde and Brett had to draw on their expertise in designing custom fish tanks and their knowledge of drum sets to make it happen.

The team at ATM received the drum set from the guys at Blues Angel Music in single pieces, one after the other.

They used stands from the 830 series, an FP-850 bass drum pedal, and all the necessary hardware to ensure the drums worked. It took a lot of trial and error and a lot of hard work, but in the end, the ATM team was able to construct a fully functional 8-piece drum kit fish tank that is also safe for fish!

The guys from Blue Angel music were speechless when presented with the final result.

“We figure we give you a high target,” the owner joked. “You might hit two, three, four drums, but never dreamed you do all a drums. I expect a call saying, no, we’re not doing this, does he know we’ve yet to back down from a challenge. Apparently, didn’t get a memo.”

The drum set fish tank was a huge success and is now one of the most popular tanks on the show. Wayde and Brett had certainly outdone themselves with this one!