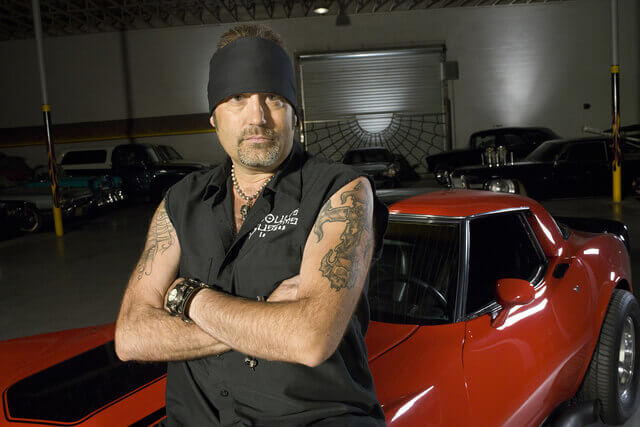 The story of History Channel’s Counting Cars is an interesting one. Danny Koker was busy running his mobile restoration shop, Count’s Customs, when luck struck for him.

Excited to put his business on the map with the help of the show, he didn’t know it at the time, but the universe had even more in store for him.

The reality television series is highly rated across the United States and the world over for being super entertaining and educational. Vehicle enthusiasts are tuning in to History Channel week in week out to get a taste of the Count’s Custom restoration business.

With all the fame and success, it is hard to imagine how the show got to the level it is at today. Today, we go back in time to tell you how Counting Cars started.

Danny, the man behind the “Counting Cars” Fame

There is no Counting Cars without Danny Koker, also called “The Count.”

The rock n roll clad biker and car gear fanatic is the man behind the success of the show. It turns out the Akron-born TV star knew he wanted to work with cars before he even turned 10.

On numerous occasions, the automobile restoration expert said that his Momma used to joke and tell him he was crazy about cars long before he started walking and talking.

What’s impressive about Danny is that he didn’t go to any school to soak up all that knowledge of automobile history. He only had an automotive class in high school, and that was it. The rest, as he says, was about rolling up your sleeves and finding out how stuff works.

Danny Koker was also lucky to have a motor enthusiast for a father. Daniel Nicholas Koker gave Danny a good foundation as far as car restoration and renovation are concerned. He, alongside other members of the Koker family, worked for the Ford Motor Company.

Koker Senior was also an accomplished musician. No wonder Danny followed the same footsteps in his own life. His father worked alongside famous people in the industry during his heyday, including CL Franklin, The Cathedral Quartet, the Foggy River Boys, Mahalia Jackson, just to mention a few.

Now, Danny is a devoted hunter of old, rejected cars. When he finds them, he restores them and flips them for profit. Some of the cars he works on don’t look promising, but they eventually fetch a pretty penny for the business.

How Did “Counting Cars” Start?

Counting Cars is one of the most-watched car restoration shows. It kicked off on History Channel in 2012 and is still going strong nine years later. The show details the daily activities of the employees of Count’s Customs, a car restoration in Nevada, Las Vegas.

Danny Koker is the owner of the shop and the main star of the show. He’s been in the business for more than two decades and knows all there is to know about working with anything with wheels.

He has tens of cars and motorbikes and keeps adding to his impressive stash. Aside from a solid work ethic, Danny also has the most amazing team to help him carry out restoration projects.

The show is a spin-off from Pawn Stars, another fan favorite on the History Channel. Counting Cars happens to be the third spin-off after American Restoration and Cajun Pawn Stars.

The show pretty much follows the formal of American Restoration with plenty of twists of its own. Pawn Stars’ Rick Harrison is Danny’s long-time friend. Before Koker had his own show, Rick would have his friend on Pawn Stars.

Koker became a recurring face of Pawn Stars for a long time. Luck came his way when the producers approached him to host a spin-off called Counting Cars. He quickly agreed because he knew what such publicity would bring to the table.

Danny Koker couldn’t have made a better decision when he signed a deal to host Counting Cars. The show, which is now in season 9, continues to climb in popularity.

Fans keep coming back for more unfolding stories regarding the crew and stars.

No doubt Dany has managed to assemble a team of talented car freaks. Every episode displays the skill and expertise of each member of the team.

We love watching the automotive artists bring back to life old cars and bikes. Once in a while, famous names like Elvira and Judas Priest’s members show up and make things a little more interesting as well.

Over the years, a number of beloved faces have left the show after fans had grown to love them. On the other hand, others have rejoined and rounded things up even more.

There has been a share of drama on the show, theft allegations, court cases. You name it. No matter what, the fans cannot stop begging for a little more of the action.

Counting Cars’ fame and success can be traced to Danny’s friendship with Paws Stars’ Rick Harrison.

The latter literally pulled his friend into the limelight. Ultimately, he got his break when the producers saw the potential in him.

What are friends for, right?