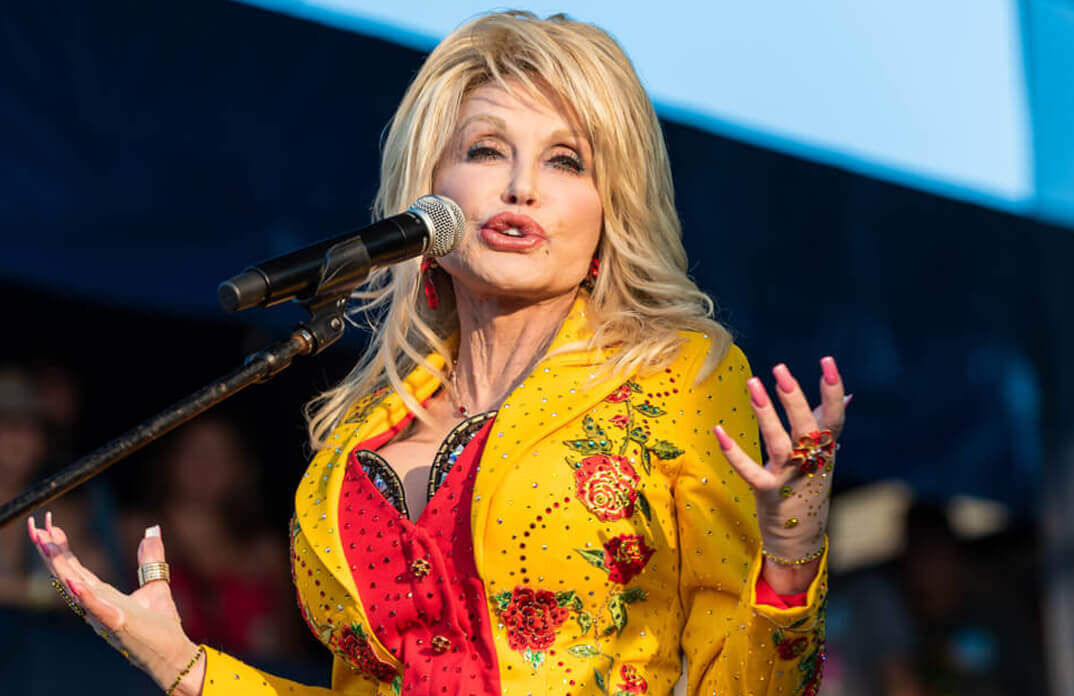 With her signature bouffant hairdo, full lips, porcelain skin, and voluptuous bosom, this blonde bombshell has sure figured how to defy age.

That said, it is no secret that Dolly Parton has had plastic surgery to improve her looks.

Dolly Parton is Candid About Her Plastic Surgery

Lots of celebrities try to hide the fact that they have gone under the knife. In the case of Lionel Richie, for example, it’s rather obvious, but the crooner keeps mum about it.

The country music icon takes her looks seriously and she has been very open about getting work done here and there to keep her in tip-top shape.

Talking to CBS Sunday Morning, the eleven-time Grammy Award winner said of her looks, “I am not a natural beauty so I make the most of anything I have. Whatever it takes, I do.”

In reference to her obsession with plastic surgery, the Jolene singer is famed for quipping, “if something is bagging, sagging or dragging, I will tuck it, suck it, or pluck it.”

When you compare Dolly’s older country girl pictures before she rose to fame to what she looks like now, you will notice a jaw-dropping difference. If we were to be honest, Parton looks too good to be true and she even agrees.

In her CBS Sunday Morning interview with Tony Dokoupil she admitted that it is true that she looks artificial but she insisted that she believes she is ‘totally real.’

How Much Plastic Surgery Has Dolly Parton Had?

It isn’t known just how many times Dolly Parton’s gone under the knife for cosmetic surgery but according to one of her plastic surgeons, Dr. John Grossman confirmed that his client has had extensive surgery to enhance her looks.

The country music star has had a brow lift, eyelid lift, a chin, and nose job, and of course, her most prominent asset—her breast have had breast augmentation, including having breast implants.

Brow lifts are popular among celebrities. The procedure is done to get rid of age lines and raise the brow for a more youthful look around the forehead and eye area. A single brow lift can cost up to $7,000 and will serve you for about 10 years.

Dr. Grossman added that although the famous singer has had work done on her face severally, hers is not a full face-lift. Well, we might never know whether that’s true or the real extent of Parton’s plastic surgeries. But, even without a full facelift, it is very clear to see that a lot of work has been done to her face.

Other than her face, Dolly’s blonde hair also stands out. According to the singer, most of her hair is natural with no cosmetic procedures and she gave up wearing wigs unless she is super busy or has to be seen in public.

On a regular day, you will find Dolly in full makeup, which she once said, takes her 15 minutes to do. You will also spot her in bold lipstick, a lot of blush, and of course, her long, brightly colored nail extensions, which make her look pop even further.

It is clear that Parton likes to look her absolute best at all times. But, we can’t help but wonder how she looks when she’s not all put together in her makeup.

The glamorous country singer admitted that in spite of the plastic surgery, she still doesn’t feel comfortable being without her makeup and she in fact sleeps with her makeup on. That’s like the cardinal sin of the beauty world —going to bed without wiping out your makeup. But, hey, this beauty regimen works for Dolly, if her flawless skin is anything to go by.

Dolly Parton: The Queen of Country Ages Like Fine Wine

However way you feel about plastic surgery, there is no doubt that it has worked wonders for those who can afford it. For Dolly Parton, plastic surgery’s meant a happy life, staying forever young and turning heads at 75.

The country music legend is married to Carl Thomas since 1966 and they remain together to date although Carl doesn’t like the limelight. The couple doesn’t have children of their own. However, Dolly’s an aunt and even a godmother to Miley Cyrus.

Parton has come a long way and she deserves to look as good as she wants to. We can only wish her a long, healthy, and of course glamorous life.