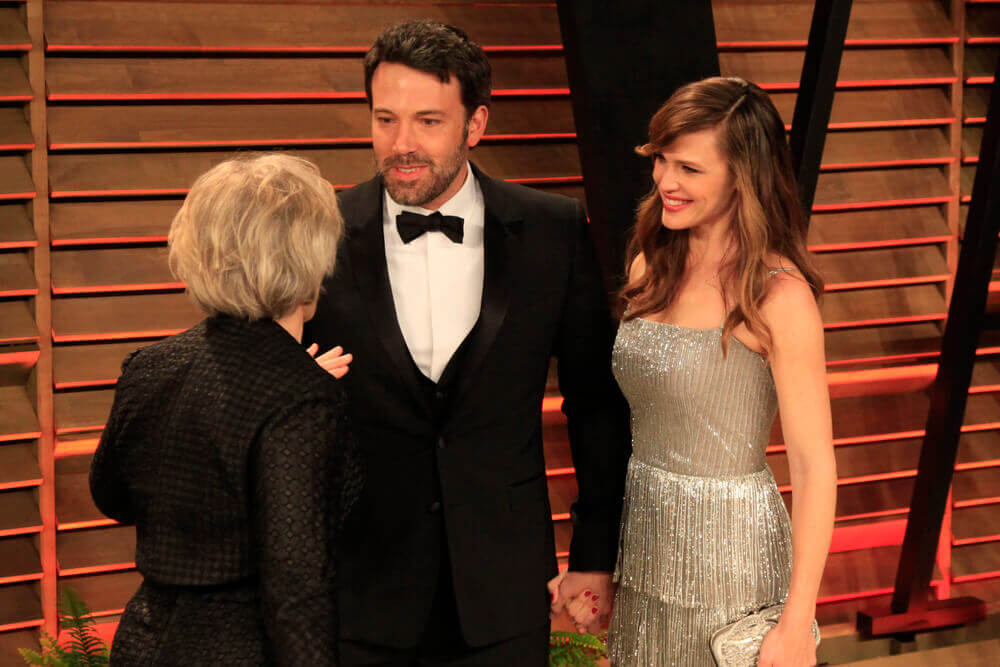 Star couple Ben Affleck and Jennifer Garner were married for ten years and had 3 children before splitting in 2017.

Affleck met Garner in the Summer of 2000 when they worked on the movie “Pearl Harbor.” They later met again on the set of “Daredevil” in Summer 2002.

In 2003, Garner and Affleck starred together on “Dinner for Five.” Despite Garner’s marriage to Foley and Affleck’s engagement to Lopez, some viewers noted that the two actors were flirting.

One writer for Vulture noted that during their shared appearance, Garner gave Affleck “such a genuine look of gratitude and affection, it makes me a bit uncomfortable to see it on television.”

On November 6, 2004, Garner visited Affleck on the set of the movie “Man About Town.”

Speaking to TV Guide, Foley said that ” nobody else was involved. Jennifer became a huge celebrity. She became a huge star, and she deserved everything she got. There was no other relationship; there was no infidelity, nothing. People get divorced, you know?”

A year later, it was Affleck and Lopez who had split.

In a recent interview with Vanity Fair, Lopez stated, ” I lost regard for myself, questioned whether I belonged in the business, thought maybe I sucked at everything.” Lopez later married Mark Anthony. A union that ultimately failed as well.

Affleck and Garner were first photographed together at the World Series in 2004 when the Boston Red Sox were playing.

After the World Series games that cemented their relationship, Us Weekly reported Garner went to visit Affleck in Vancouver while he was filming “Man About Town.” The two were photographed together walking in the rain.

After months of mostly keeping their relationship private, Affleck proposed to Garner on her 33rd birthday, according to People.

Affairs and the Nanny

In July of 2015, Us Weekly broke the story alleging that Ben Affleck had been involved in an extramarital affair with his children’s nanny, Christine Ouzounian, citing anonymous sources.

A source close to Ouzounian claimed that she belonged to a high-end nanny firm based in Beverly Hills and was hired while the married couple was already in the midst of a hush-hush, 10-month-long trial separation.

Not long into Ouzounian’s employment, however, sparks started flying between the recent college grad and Affleck. “They would hang out without the kids. And they were very flirty,” the source disclosed.

That source also maintained that Garner immediately let Ouzounian go the moment she found out that her husband’s relationship with the family nanny was anything other than strictly professional.

A source claimed Ouzounian’s firing did absolutely nothing to quash their relationship. Instead, the star-crossed lovers still found ways to communicate with one another. “She says Ben really, really likes her,” the anonymous insider divulged. “She’s saying this is true love.”

Affleck’s camp, however, vehemently denied everything. “All allegations of a romantic relationship are baseless,” a rep for the actor swiftly stated in an interview with Us Weekly.

Soon after the report about the nanny emerged, Affleck and Garner released a joint statement about their divorce to People magazine, stating “After much thought and careful consideration, we have made the difficult decision to divorce.”

Speaking to the New York Times, Affleck revealed that he started to drink more when cracks began to show in his marriage with Garner. “The biggest regret of my life is this divorce,” he told the magazine.

“It’s just stewing in a toxic, hideous feeling of low self-worth and self-loathing. I have certainly done things that I regret,” he added. “But you’ve got to pick yourself up, learn from it, learn some more, try to move forward.”

In an interview with Vanity Fair in February 2016, Jennifer Garner directly addressed her husband’s infidelity.

She confirmed that the couple had been separated for months before “Nannygate” and that Ben’s infidelity had nothing to do with the decision for a split.

“Bad judgment? Yes. It’s not great for your kids for [a nanny] to disappear from their lives.”

This was probably one of the more regrettable outcomes for the devoted mother. When talking about her children, Garner revealed, “I have had to have conversations about the meaning of ‘scandal.'”

Almost a year later, unnamed sources told People magazine that Affleck and Garner called off their divorce, although they weren’t back together.

Garner realized long ago that she couldn’t change Affleck, even after she supported him as he recovered from his alcohol abuse and gambling addiction. Her support and understanding were the reason she held off on the split.

However, on April 13, 2017, the couple officially filed for divorce.

Her children have been her number one priority throughout the divorce. Divorce and separation are disruptive, and children are often the first to suffer as a consequence.

Despite all of the ups and downs, Jen’s commitment to Ben and her family is an incredible act of kindness and love.

She did not expect this reality as she walked down the aisle at their beach wedding, but she has already accepted that they will have to deal with the situation at hand, and not dwell on the past events that led them to this place.

In October 2018, Ben revealed to his Instagram followers that he recently completed a 40-day stay at a treatment facility for alcohol addiction.

In a related Facebook post, the actor wrote, “I have completed treatment for alcohol addiction; something I’ve dealt with in the past and will continue to confront, I want to live life to the fullest and be the best father I can be.”

Affleck’s romantic life has been making headlines since. He has moved on from his longtime girlfriend Lindsay Shookus and had taken up with 22-year-old Playboy model Shauna Sexton.

In 2019, he met actress Ana de Armas while filming in New Orleans, Louisiana, on the psychological thriller “Deep Water.” They began dating soon afterward and were often spotted in Los Angeles, California during the pandemic.