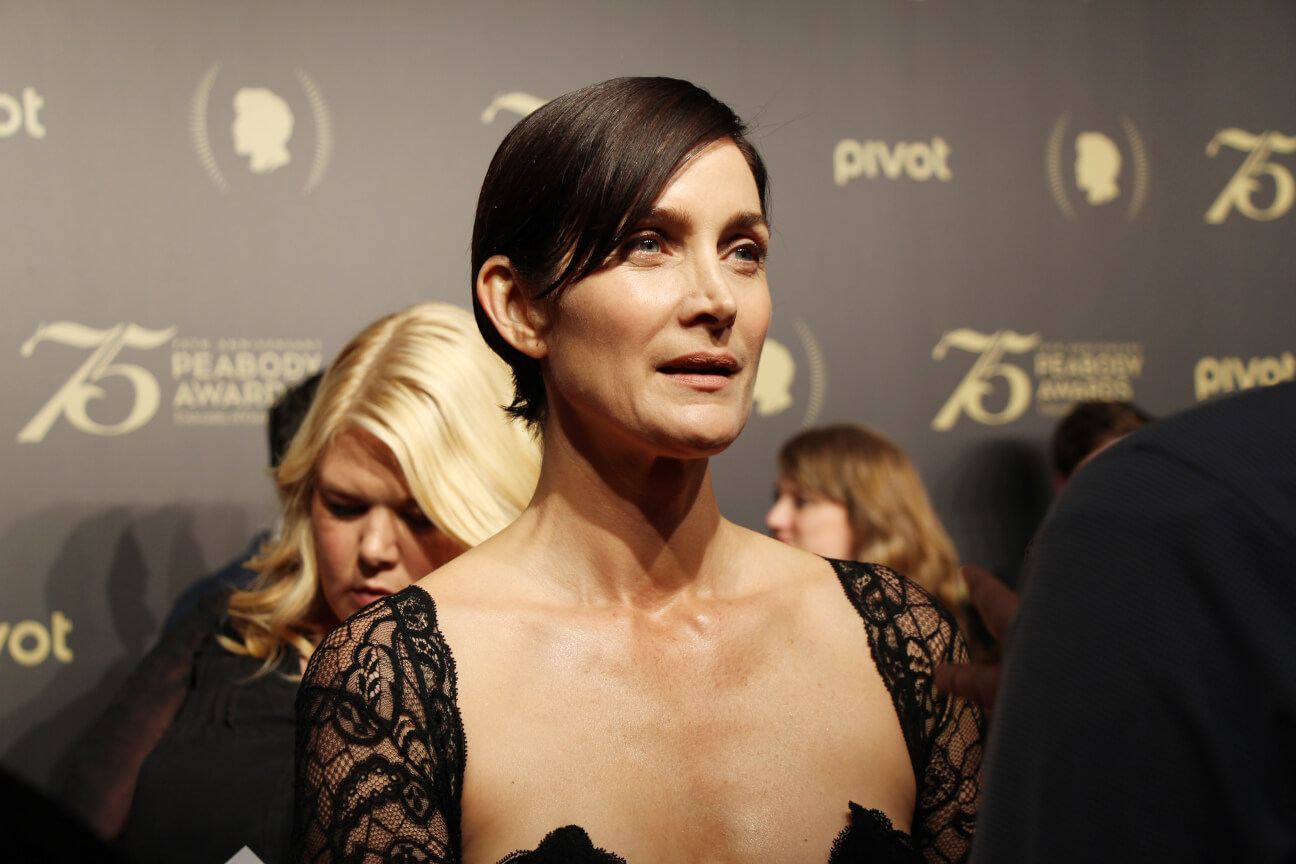 Carrie-Anne Moss is a Canadian movie and television actress, best known for her role as Trinity in the “Matrix” trilogy. Her more recent appearances include her role in the Netflix show “Jessica Jones.”

The actress was born on August 21, 1967, in Burnaby, British Columbia, Canada. She is named after the 1967 Hollies hit, “Carrie Anne“, which was playing in the charts when her mother was pregnant with her.

Moss lived with her mother, Barbara, in Vancouver, British Columbia, Canada, when she was young. She joined the local children’s musical theater in Vancouver at the age of 11.
In her final year of high school, she toured Europe with the Maggee Secondary School Choir. In the same year, she booked her first television role in the drama “Dark Justice.”

While Moss toured Europe, her choir made a stopover in Spain. There she landed the role of Tara, a secretary to Judge Bruce Marshall in “Dark Justice.” In 1992 she moved to Los Angeles with the show’s production. She exited the series before the third (and last) season.

In Los Angeles, she enrolled at the American Academy of Dramatic Arts in Pasadena. She got a role in the “Melrose Place” spinoff “Models, Inc.” opposite Dallas graduates Linda Gray and Garcelle Beauvais. The series went off the air after its first season.

For the remainder of the 1990s, she appeared in several TV and film roles, including “Due South”, “Baywatch”, “F/X: The Series”, and “The Secret Life of Algernon” to name but a few of her pre-Matrix onscreen career.

In 1999, Moss was cast in her groundbreaking role as Trinity in “Matrix.” The three films were shot in Australia. To get ready for her role, she had to undergo a three-hour physical examination during the casting and hard training months.

During the shooting of the first film, she injured her ankle. She broke her leg during training for the 18-month filming of “Matrix Reloaded” and “Matrix Revolutions.”

Her starring role in the “Matrix” franchise made Moss a global star.
She was nominated for an MTV Movie Award for Groundbreaking Female Performance and a Saturn Award for Best Actress.

In February 2020, the shooting of the fourth film of the “Matrix” franchise started in Berlin, Germany. Carrie-Ann is reprising her role as Trinity, and Keanu Reeves resumes his role as Neo. Priyanka Chopra and Jonathan Groff complete the cast for the film, again directed by the Wachowski Sisters.

Movie Career Outside of Matrix

Carrie-Anne took the lead roles in “Memento,” “Chocolate,” and “Red Planet” in 2000. The production of the Matrix sequels took up most of the early 2000s for Moss. She appeared in “Suspect Zero,” “The Chumscrubber,” “Disturbia,” “Fido,” “Love Hurts,” “Unthinkable,” “Pompeii,” “Elephant Song,” and “Frankenstein,” to name but a handful of Moss’ numerous film and television recordings.

In recent years, Moss has made the cross-over to television and has appeared in “Chuck,” “Man Seeking Women,” “Daredevil,” “Humans,” “Vegas,” “Iron Fist,” “The Defenders,” “Wisting,” “Crossing Lines,” “Jessica Jones” and “Tell Me A Story.”

In addition to her movie and TV career, Moss is also the founder of the lifestyle brand Annapurna Living.

In an interview with the LA Times, Moss said: “I had my children, fell in love with motherhood, but couldn’t find what I was looking for in terms of support or community. It felt isolating. I could not find ‘my people.’ “

This resulted in the founding of Annapurna Living, which aims to help mothers connect with their community and to empower them through mindfulness and meditation.

On the Annapurna Living website, Moss teaches online courses on living a very mindful and considerate life. She offers a helping hand to women struggling with the stress and pace of the modern world and shows them what it is like to be a wife and mother.

Together with her husband, the actress used to own a house in Los Angeles. They sold the two-story home in the early 2000s for an undisclosed sum.

The couple also owned a large warehouse in Ojai, California, with kitchen and bathroom facilities where they hosted friends for barbeques and sleepovers in the early 2000s.

While Carrie-Anne’s known net worth isn’t near that of her male movie counterparts, she managed to make a comfortable living for herself and her family.

It can only be speculated that the revival of the Matrix franchise will leave her with a sizeable paycheque to further secure a sizable nest egg.