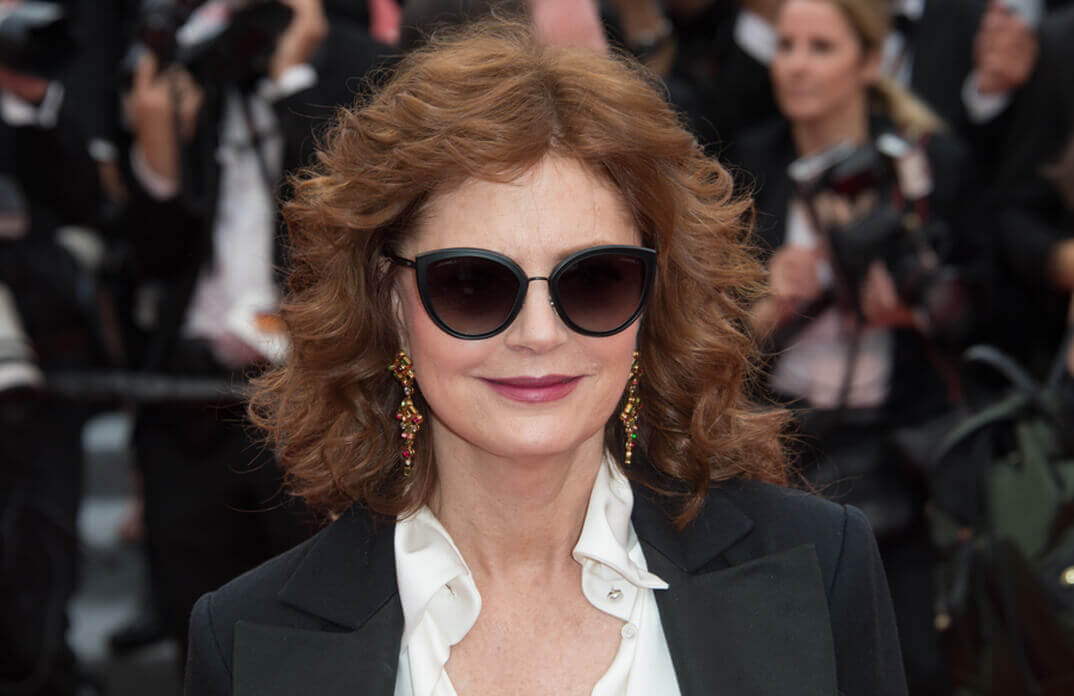 They say with age comes wisdom. But, age also brings something else: wrinkles, saggy skin type, thinning hair, growing pains…you get the drift. All in all, if we were, to be honest, looking good at 70 is not always the norm.

That is why we celebrate the exceptions. In that spirit, we’ve rounded up some exceptional best-looking 70-year-old women. Take a look!

Gold Hawn was born in 1945 and was one of the most bankable Hollywood stars for more than three decades.

Over the years, the beauty has appeared in numerous films, including A Girl In My Soup (1970) and Private Benjamin (1980), for which she was nominated for the Academy Award for Best Actress.

Hawn received an Academy Award and Golden Globe Award for Best Supporting Actress for her role in the 1969 film Cactus Flower. Goldie is the mother of Wyatt Russel and actress Kate Hudson, who has definitely inherited her mother’s dashing looks.

This beauty is the definition of ‘aging gracefully.’ Born in 1946, Susan has bagged numerous rewards throughout her acting career. Some of these include an Academy Award, a SAG award, and a BAFTA Award.

She has also been nominated for 9 Golden Globe Awards, and in 2002, she received a Hollywood Walk of Fame star for her impressive contribution to the movie industry.

While she is more recognized for her amazing work as an actress, Susan has also been in a couple of high-profile relationships. After divorcing her first husband, Chris Sarandon, she was linked to David Bowie, Italian film producer Franco Amurri, and actor Tim Robbins.

Her relationship with Jonathan Bricklin, who is half her age, drew considerable attention.

Rocking her iconic grey hair, it is hard not to spot Rita Moreno. This now 89-year-old Puerto Rican beauty (yes, she totally doesn’t look her age) is not only killing it with her good looks, but she has also broken records and scaled professional heights.

She is among a small group of artists to have worn a Grammy, Emmy, Oscar, and Tony awards. Talk about beauty and brains! Moreno also dated popular men, including musician Elvis Presley and actor Marlon Brando.

You’d think she’d retire by now, but this fearless beauty continues to keep busy, and as of 2020, she portrayed the lead matriarch in the remake of One Day at a Time.

Ranked number 3 on Playboy’s 100 Sexiest Stars of the Twentieth Century, Raquel Welch is undoubtedly one of the best-looking women over 70. The bombshell rose to fame in the early 1960s and later became an international sex symbol due to her unique and attractive physical appearance.

Raquel, who was born in 1940, won a Golden Globe Award for Best Motion Picture Actress in a Musical for her role in The Three Musketeers.

Empire magazine ranked her as one of the top 100 sexiest stars of the twentieth century, while Men’s Health ranked her number 2 on their Hottest Women Of All Time list.

Raquel has been married and divorced four times and says she doesn’t plan to marry again. That aside, she is a mum to Tahnee and Damon Welch.

Faye Dunaway is the true definition of a Hollywood legend. This gorgeous actress has had a long and successful career and numerous accolades to her name.

She was first nominated for an Academy Award for portraying Bonnie Parker in the popular film Bonnie and Clyde and later went on to win the award for Best Actress for her role in the 1976 film, The Network. Despite her fame, Dunaway lives a very private life and makes few public appearances.

She’s been married two times, first to singer Peter Wold and then to Terry O’Neill, a photographer with whom she shares a son.

Hellen Mirren seems to get more gorgeous with age. Mirren, born in 1945, has both British and American citizenship and was appointed a Dame in the Queen’s 2003 Birthday Honors for her contribution to the arts and drama.

To date, she is the only person in both the US and the UK to achieve the triple crown of acting, i.e., an Academy Award, Emmy Award, and Tony Award. Her good looks and excellent acting talent have earned her plenty of interesting roles over the years.

Aside from film and theater, Dame Mirren signed a deal to be the face of L’Oreal, and she says that the brand’s beauty products have helped a lot with her skin.

The best part? She became LÓreal ambassador at age 69, such an impressive feat! As for her love life, Mirren has been married to Taylor Hackford since 1997.

A list about the best-looking 70-year-old women would be incomplete without Dolly Parton on it. This country music legend was born in 1946 and continues to stun now as she did during her youthful years. Parton’s big break came following her 1973 performance of Jolene.

This was followed by other major hits such as Love is Like a Butterfly and I Will Always Love You. The always happy and beautiful blonde is estimated to have a net worth of about $500 million and is among the wealthiest music stars.

In recent years, Parton has moved to TV and film, and it doesn’t seem like she will be calling it quits any time soon. You can catch her on Dolly Parton’s Heartstrings on Netflix and in the 2020 film Christmas on the Square. Parton and her boo Carl Thomas Dean have been married since 1966, and they are still keeping it strong.

Diana Ross’s attractive looks are undeniable, and she seems to look better and better with age. This music icon was born in 1944, and she started her singing career with the popular girl band, The Supremes. After they parted ways, Ross went on to build an outrageously successful career as a solo artist.

You will remember some of her all-time great hits, such as I am Coming Out and Aint No Mountain High Enough, among others. This gorgeous lady even tried her hand in acting and was pretty good at it.

She was nominated for a Golden Globe and an Academy Award for her role in the biopic film Lady Sings The Blues (1972). As if that is not enough, the sultry songstress received the Grammy Lifetime Achievement Award in 2012 and was honored at the Grammy Awards for her 75th birthday.

Ross has been married twice and has five gorgeous children, including Chudney, Evan, Ross, Rhonda, and Tracee.

Born Cherilyn Sarkisian, Cher, as she is famously known, is the epitome of the ageless feminine spirit. This drop-dead gorgeous beauty was born in 1946, but even in her 70s, she looks dashing and freakishly fit.

She skyrocketed to fame following the hit song I Got You, Babe, ranked as one of the biggest and best-selling hits of the 60s.

To date, Cher has sold over 100 million records, and even though she isn’t in the limelight as much, she’s still considered A female empowerment icon, especially in Hollywood, where it can be particularly difficult to survive and thrive as a woman.

Other than her music career, this gorgeous gal also doubled in acting, and her skills attracted a lot of praise.

Sophia Loren was a complete damsel in her heyday, and her good looks haven’t faded to date.

This Italian actress was born in 1934 and started her film career at the age of 16 after participating in a beauty pageant—a testament to her beautiful looks.

The American Film Institute named Loren as the 21st greatest female star of Classic Hollywood Cinema. She was also earned numerous awards throughout her acting career, including an Academy Award, Grammy Award, five Golden Globes, and an Academy Honorary Award, to mention a few.

After her marriage to Carlo Ponti and having two children, Loren seemed to move away from public life. Her most recent acting role was in 2009 in the movie Nine where she acted alongside Penelope Cruz.

Carmen Dell’Orefice is the definition of “old is gold.” Everything from her fairy-like gold-white hair to her porcelain skin is enviable for someone her age. Born in 1931, Carmen appeared on the cover of Vogue magazine at just 15 years—not many people can boast of such a feat.

With her almost perfect looks, this gorgeous lady is referred to as the world’s oldest working model.

Yes, Dell’Orefice continues to model despite her advanced age. And, even at that age, she is still kicking it and is looking as beautiful as ever.

Judi is consistently ranked as the ‘best actor in Britain,’ and it’s easy to see why. Born in 1934, Dench continues to attract the public’s attention with her solid looks, despite her age, as well as her extraordinary acting talent.

This English actress has won numerous accolades, including the Academy Award for Best Supporting Actress for Shakespeare In Love (1998), where she portrayed Queen Elizabeth. Others include the BAFTA TV Award, British Academy Film Awards, and many more. She’s also been Oscar-nominated several times and received many other recognition awards.

If you have watched the much-publicized film, The Color Purple (1985), Margaret Avery will be a familiar name (Shug Avery, anyone?). This age-defying actress was born in 1944 and has had a long and impressive career.

She was Oscar-nominated for best-supporting actress for her role In The Color Purple film, after which her acting career took off, and so far, she has appeared in tons of films and television programs. Avery is not only a good-looking gal; she also isn’t slowing down, with her most recent role being on BET’s hit show Being Mary Jane, where she stars as Helen Peterson.

She also acted alongside Taraji Henson in Proud Mary (2018). The beautiful actress has one daughter, Aisha, from her previous marriage with Robert Hunt.

This blonde bombshell knows how to age well. Sommers is one of the 70s celebrities known for their good looks. She shot to fame after starring in the popular sitcom Three’s Company, where she was portrayed as Chrissy Snow. Her popularity further soared following her starring role in the 90s sitcom Step by Step.

Sommers went on to double in a lot of gigs in Hollywood, including being a Playboy Bunny and even hosting her own daytime talk show. Sommers is also a strong advocate of healthy living and is the author of Ageless: The Naked Truth About Bioidentical Hormones and four other diet books. Well, it is no surprise that this bombshell is looking as good in her 70s as she did in her 20s and 30s.

So, there you have it: the best-looking 70-year-old women. What this list confirms is that age is just a number. Age can make you wiser and less rushed, but that doesn’t mean you can’t look good while at it. Good on you, ladies!