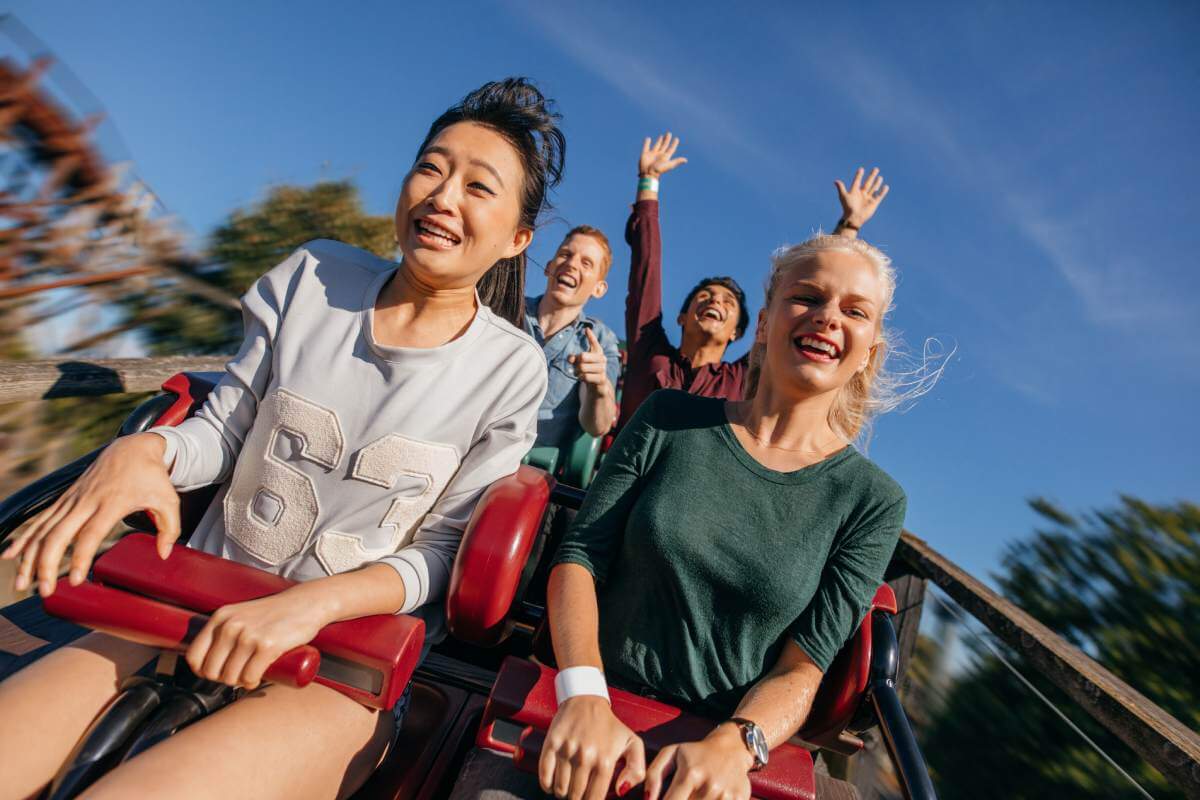 A rollercoaster ride, slingshot ride, Rotar ride, Gravitron ride, you name it– they can be a thrill or a kill. If you’ve been to any of these amusement park attractions, you know it’s a literal battle for survival once you are up in the air.

Amusement rides are generally safe, but it is common for some adrenaline junkies to pass out, and in some cases, some pass out more than once.

So, why do people pass out on rides? Is it dangerous, and is there anything you can do to avoid blacking out in the middle of the most thrilling ride of your life?

You will find all the answers in this article. Keep reading!

Is It Normal To Pass Out On A Rollercoaster Ride?

Passing out on a rollercoaster or amusement ride is common, and scientists explain that there is a medical reason for this occurrence. So, it is normal to pass out on a roller coaster ride.

A combination of the rollercoaster’s gravitational forces (G-forces) and your body’s reaction to extreme stimuli can cause you to lose consciousness while on a ride.

As the ride goes around in a circuit, positive G-forces from the rollercoaster are exerted on your feet. This exertion causes blood to leave the brain and rush to the feet, decreasing oxygen. Low oxygen levels in your brain can cause you to experience a blackout.

At the same time, if you ride with your head hanging outside the rollercoaster curve, you will experience high negative-G forces, causing blood to rush to your brain. This occurrence causes a redout where you see flashes of red as the ride goes up and down.

When you encounter an extreme situation, of which we can all agree, a rollercoaster is a good example, your nervous system produces adrenaline, the body’s fight-or-flight response to a potentially dangerous outward threat.

A rollercoaster’s dramatic ups and downs cause the adrenal gland to produce adrenaline in response to the ”stress.” Adrenaline and the force exerted on your body can cause a drastic or slow drop in your heartbeat per minute, resulting in a condition known as vasovagal syncope.

What Is Vasovagal Syncope

When your body is subjected to intense physical or emotional stress, your heartbeat per minute may slow. In turn, a slower heartbeat can cause a decrease in blood flow to the brain, resulting in a temporary loss of consciousness.

Also known as neuro-cardiogenic or reflex syncope, this physiological reaction can affect anyone. But, small children and young people are more prone to passing out when faced with extreme external stimuli such as the up and down movement of a rollercoaster.

The numerous nerves in the body control our heart rate per minute. They also support the width of the blood vessels and regulate the blood pressure as it passes through the vessels.

An amusement ride can suddenly confuse your nerves, causing blood vessels to dilate more than usual, leading to a drop in blood pressure. As mentioned, low blood pressure causes an oxygen deficit in your brain, resulting in loss of consciousness.

What Happens When You Pass Out In a Ride?

The dramatic highs and lows of a rollercoaster ride, combined with the screams, vibrations, and g-forces, directly impact your body, legs, and brain.

When standing up, the blood pressure is generally higher in your leg muscles than in your head. Your entire circulatory system is used to these optimal conditions. But blood flows to your legs when the gravitational forces increase, as is the case during a rollercoaster ride. This reaction can make it difficult for your heart to pump blood back to the brain.

Without adequate blood supply and oxygen, your brain blacks out, causing you to pass out, with common symptoms being faded sight, drowsiness, then a complete loss of consciousness.

While blackouts are common during a rollercoaster ride, it is also possible to experience a redout. A redout is when you see red during the ride right before losing consciousness. This condition happens when your head hangs outside of the ride’s curve. Doing this subjects your skull to extreme g-forces, causing blood to flow to the brain, which explains why you see red.

Is It Dangerous to Pass Out On Rides?

Passing out on an amusement ride is generally not dangerous. Most riders who lose consciousness come to after a short while and do not feel any intense pain during this episode. So, vasovagal syncope is generally not something to worry about because it is temporary.

That said, when your blood pressure drops, it can lead to medical complications and sometimes death. If you are unfit or have underlying medical conditions such as hypertension, heart disease, or diabetes, losing consciousness, even temporarily, can sometimes be fatal. Pregnant women should also avoid going on rollercoasters, as should small children prone to sudden heart attacks.

Out of sheer bad luck, some healthy people faint and may suffer a cardiac incident, stroke, or death from riding on a rollercoaster. The extreme g-forces that disrupt blood flow can cause blood vessels to rupture, potentially leading to a stroke or brain damage.

Generally, only a few people react severely to a rollercoaster ride. Most riders will scream and experience intense adrenaline; some will pass out occasionally, and that’s it.

How To Avoid Passing Out

The good news is that you can enjoy a rollercoaster or slingshot ride without worrying too much about passing out.

Here are some steps you can take to stop passing out on rides:

If you plan on an amusement ride, keep yourself hydrated the whole time you are at the park. Drink just enough water for your needs; too much can cause you to puke, while too little can increase your chances of fainting.

If possible, sit in the middle of the ride where there is less vibration. Riders in the front and back seats experience more vibrational and gravitational force and may potentially feel sick or pass out.

Keep your head and neck straight and rest against the headrest. Try focusing on a non-moving object to prevent your head from whirling around. Take deep breaths to relax your muscles during the wild ride. If you feel like puking, breathe in through your mouth and out through your nose.

Passing out on a ride at amusement parks is normal and common. However, it is best to avoid consecutive rides and to keep away if you have an underlying medical condition, are prone to panic attacks, or are pregnant. Fainting on a rollercoaster is generally not dangerous, but some situations can turn fatal, especially if you are already at risk due to an underlying condition.