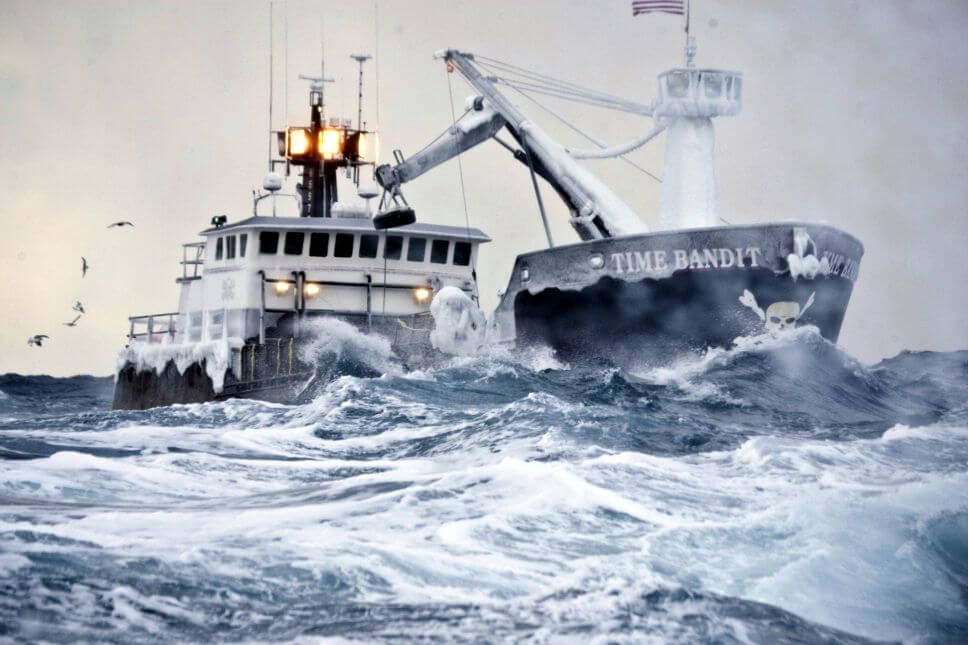 A reality TV show on the Discovery channel, The Deadliest Catch has been airing on television since April 2005.

The show follows experienced crab fishermen on their boats in the Bering Sea, chasing their biggest catches.

The show takes place during the Alaskan king crab and snow crab fishing seasons. The reality show is produced for Discovery Channel by Original Productions.

In 2018, one major player was noticeably absent from the popular show—the Time Bandit commercial fishing boat.

There are several reasons the Time Bandit disappeared for about two years from the show.

For starters, the massive vessel’s unexpected malfunction just before season 14 kicked off.

This is according to a status update by veteran fisherman Johnathan Hillstrand, which he posted to his Twitter account on October 13th, 2018.

The post read, “for the last 38 years, I have always gone to Sea during King Crab Fishing Season. This will be my first time missing in action, aside from the closer more than four decades ago! Our engine has blown up, meaning no season for us!!!”

To bring you up to speed, the famed boat was manufactured in 1991. That’s close to three decades ago. So naturally, the main engine must have reached its maximum life expectancy.

Sure, there are plenty of boats that don’t develop engine problems five decades after their production, but a good majority of them need repair after 20-30 years of active use. Time Bandit happens to be one of those commercial fishing vessels.

Thankfully, the fishing boat is now up and running. A few days after his first tweet, Jonathan wrote another post promising fans that the fishing vessel was fixed and in good condition to return alongside the human catch stars.

“Thank you, our fans, for your posts of encouragement. God richly bless you!! Together with my wife, I have gone through a couple of busy days as we’ve been relocating to Pierce County. Our Crab Boat, Time Bandit, is fixed and doing well. Axel, Eddie Senior, and Eddie Junior will come with it to Homer. I will make sure to let you know.”

Going by the words on this post, fans assumed that the fishing vessel was going to come back to the show, but that never happened. The owners’ social media accounts keep posting videos showing heavy use of the crab boat, but no filming has occurred.

Sale of the Boat

After fixing the Time Bandit’s engine, TMZ reported the ship for sale in 2018.

Dock Street Brokers’ website showed its asking price as $2,888,888. The vessel, which includes four staterooms, berths, and the galley and measures 113 x 28 x 7 inches, stayed on the market for over a year.

No one is sure why the owners had decided to sell Time Bandit back then.

One speculation is that they did this to finance the cash settlement to their deckhand David Beaver who sued them for $1.4 million.

Dave suffered gruesome injuries on his right hand while on the boat. Lucky for him, he regained full motion after multiple re-construction surgeries, but he sued the Hillstrands for damages.

Upon missing from the Deadliest Catch season 14, another word went round, claiming that Johnathan Hillstrand was retiring from pulling out crab pots to try his luck with another type of fishery. His assistant responded to the rumors via a Facebook post that read:

“There were plans to have Captain Johnathan step down from Crab Fishing to focus on another crab fishery. Unfortunately, we ran into issues with his permits and paperwork, so Captain has resumed fishing crab one more time.”

Is Time Bandit back on Deadliest Catch?

Yes, the acclaimed 34-meter boat has returned for more dramatic fishing in the Bering Sea.

Johnathan announced his return via a social media post, which read, “CATCH us tonight as we come back to Discovery Channel.”

Season 16 filmed the crew and captains right in the middle of COVID-19. In addition, this season takes a different angle as it investigates Russian crews’ illegal fishing and its effects on Deadliest Catch. Fans are in for a ride!

Time Bandit is a significant part of the Deadliest Catch that when it wasn’t featured in two consecutive seasons, Catch fans panicked.

After two long years of speculations, the fishing vessel is now back with a bang! We sure look forward to seeing it alongside the other veteran stars for more high-stakes crab fishing action!