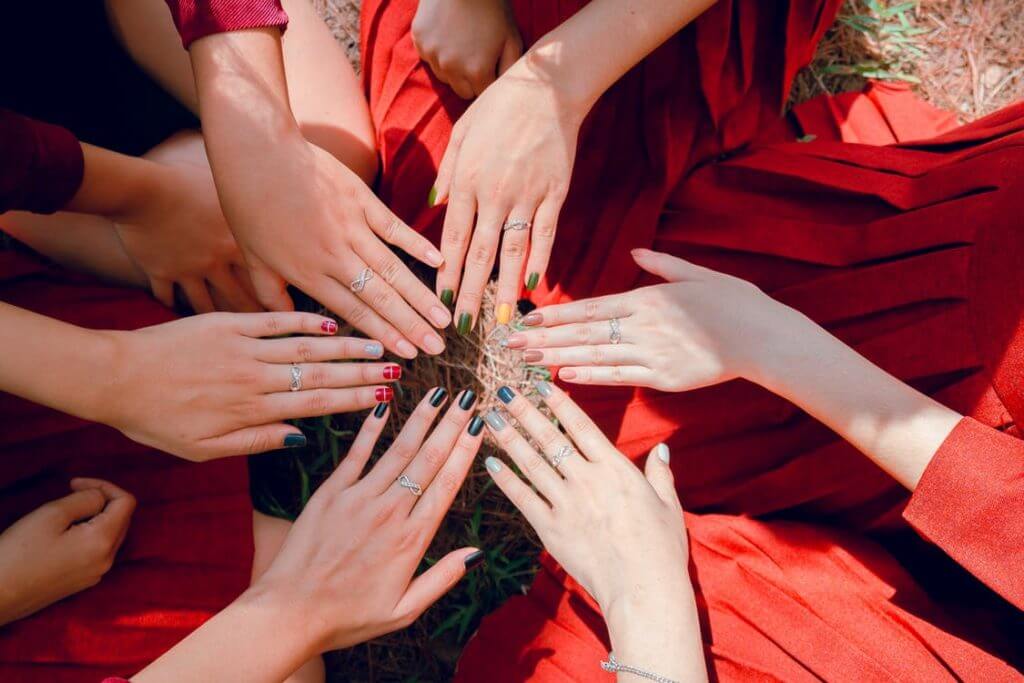 In 2011, three sisters Keri, Christy, and Lyndsey launched a nail-wraps company in their hometown of Utah. The idea was born when Lyndsey got cute zebra-patterned wraps on her nails at a nearby salon. As she watched the nail expert attach the acrylic sheets over her nails using glue and hairdryer, she had a light bulb moment.

After Lindsey shared what she saw, the sisters launched a salon business of their own to test out the product at Christy’s basement.

The nail company would go on to become one of the most successful ventures in its category. Jamberry sold over a hundred stunning nail wrap designs that ranged from cow prints to college logos to beautiful polka dots. The wraps, made from Vinyl sheets, lasted up to one month on the toes and up to half a month on the fingers.

In the beginning, clients had to go to their basement salon to have the wraps stuck on to their nails. However, over time, the sisters expanded operations and started an e-commerce store to reach more markets. For a while, this went on until the company spread its wings even further and started operating like your classic MLM.

That meant that Jamberry stopped dispensing the products to consumers by themselves and resorted to using sales consultants to do upselling for them.

From 2014 to 2018, this was how the company operated. Despite having massive success, Jamberry foreclosed in 2018. Employees got the announcement in June 2018 that Jamberry was no longer able to sustain itself and that it would close down.

But what really went down? Let’s take a closer look.

The Beginning of Trouble

Jamberry might have closed its doors in 2018, but as it turns out, their problems started way before that. When the company decided to sell products through sales consultants, demand rose through the roof.

With over 70,000 consultants marketing the wraps, Jamberry quickly realized that they needed to increase production by a huge margin. While this was great news for the company, it worked to their disadvantage in the end.

Here’s why: with increased demand, the company was forced to overproduce. Eventually, the quality of the wraps and the rest of their products took a nosedive. The fact that the company’s equipment was old didn’t help things either.

In addition to battling quality issues, Jamberry also experienced challenges with shipping. Naturally, handling such giant volumes of sales increases the chances of shipping mistakes as massive amounts of the nail products are sent to different clients and fast. For a while, Jamberry’s customers complained of wrong deliveries and missing orders.

This added to their list of consultants beyond the United States. Unfortunately, only about 1% of these made real profits from the e-commerce turned MLM agency. To earn a commission, you had to ensure you sold products worth at least $200.

Since the company allowed selling to yourself, most consultants did just that and sank into debt. Ultimately, the company suffered for it as people started referring to it as a classic scam. Consultants left the company, which affecting sales negatively.

Several Jamberry representatives took to YouTube to complain about the company’s shipping issues. They also claimed that Jamberry was running late on their commission payments and that they had stopped communicating with the sales reps.

The competition started targeting their customers on social media sites such as Facebook. Jamberry tried to counter the problem by investing in the company and hoped to expand to more countries. However, the management soon realized they were going down and needed to close up shop.

On a Tuesday night on the 24th June 2018, Jamberry employees received a late-night mail telling them that the following day was their final official day at work. The email from Mark Brown, Jamberry’s vice president of human resources, read: “Please avail yourself to my office at noon to discuss your health insurance and other benefits.”

According to the email which was shared with CBS, the over 50,000 employees were “not eligible for a refund from Jamberry.”

Not really. According to a number of reports, M Network bought some Jamberry assets. Apparently, the nail company owners had already sold a stake to some investors a couple of years ago.

M Network is yet to give a clear report on what the merger really meant for them. We know that they are interested in the product rather than the workforce and other aspects of the company.

Clearly, Jamberry started from a good place. Unlike LuLaRoe, which was an MLM from the beginning, Jamberry was your normal startup on the way up the corporate track.

The company’s biggest faux pas was introducing multi-level marketing in its operations. If they had stuck to their eCommerce way of selling products, chances are they would still be in business.