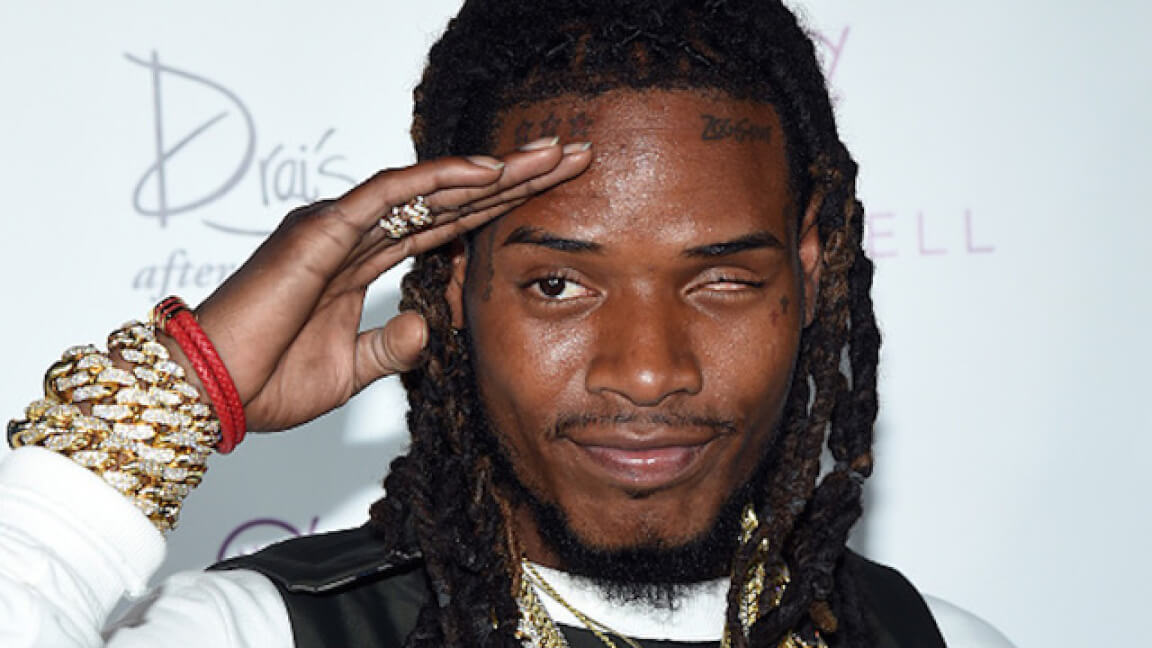 Fetty Wap became internationally known in spring 2014 with the song “Trap Queen,” which made number two in the single charts in the U.S.

His trademarks are his shaky voice and his honest, aggressive lyrics.

The rapper has never been immune to scandals.

Between endless baby-mama dramas, a leaked sex video, and appearances in court, Fetty has already lived a hundred lives before his 30th birthday.

This is the incredible story of Fetty Wap.

His grandfather was a preacher in his hometown at Solomon’s Temple Church, and as a child, Fetty Wap was part of a group of four who sang in the church. He also learned drums and piano.

Willie had an all but easy childhood and youth. From birth, Maxwell struggled with glaucoma, an eye disease that can lead to vision loss. As a result of this disease, the boy lost his left eye at a young age. He wore a prosthetic eye for much of his youth, he suffered bullying and ridicule at school.

As a result, Willie Maxwell often got into arguments and, at some point, even threw a desk at another student. With time, he felt more comfortable in his own skin and, one day, decided to overcome his handicap by completely removing his prosthetic eye.

Rap and lyrics helped him to pursue his own path and to deal with marginalization. It also provided him with an area in which he was more than capable of standing up to his classmates and gaining self-confidence. Music became an outlet, rapping became self-therapy.

However, in Maxwell’s teenage years, things took a turn for the worse. After getting into altercations, he decided to call it quits. Since there were no other options, the teenager started dealing drugs. Soon he was homeless. Later, he explained that he had been sleeping at friends’ houses for many years, and stated, “I couldn’t even use a bed. I was lucky I had a carpet.” Soon Maxwell had a son to feed, and things did not look good.

Beginning of a Rap Career

He and a friend named Monty started to experiment with different beats, which they found on a website called SoundClick. They recorded numerous demos, refined their rap style, and became more confident. It was not long until they would discover a rap beat that would eventually make Fetty Wap famous…

The beat that would later form the basis for “Trap Queen” was created by a then wholly unknown Belarusian producer named Tony Fadd. He had published the beat on his website, where Fetty and his crew accidentally found it.

He played a rough cut to Nitt Da Gritt, which ran an independent record label called RFG. Soon it was time for Fetty Wap to professionally record the track in 2014.

Not long after, the song was played on the radio and turned out to be an enormous success.

The song achieved platinum status and over 130 million views on SoundCloud and over 675 million on YouTube. The track is about a woman who cooks and sells crack cocaine. It features a fresh style of vocal delivery that would eventually make Fetty Wap a household name in the rap industry. Allegedly, before his path to fame, Fetty Wap actually had an encounter with the woman he describes in “Trap Queen”.

The track managed to remain in the U.S. charts for what felt like an eternity and was awarded platinum several times. Various remixes by artists such as Azelia Banks, Naderi, French Montana, Yo Gotti, and Rick Ross further fuelled the hype surrounding the new shooting star of the rap scene. Even pop icon Taylor Swift has performed the song together with Fetty Wap.

The success in the charts was not far off. In the summer of 2015, the two new singles “679” and “My Way” were in the U.S. Top 20 at the same time as “Trap Queen.” The last time rapper Eminem achieved this feat was in the U.S. Top 20. Also, Wap was the first male rapper to have simultaneous singles in the top 10 since Lil Wayne had done it four years earlier.

The newcomer also scored big on the prizes. At the MTV Video Music Awards, he won in the category “Best New Artist.”

After his first three singles, Fetty Wap released his self-titled debut album in 2015. Fetty Wap was nominated twice at the 58th Grammy Awards. In the next phase of his career, he collaborated with other musicians, including big names like Nicki Minaj, French Montana, and Fifth Harmony.

In 2017, the rapper fired an assistant because she apparently cheated him out of almost 250,000 dollars.

Shawna Morgan allegedly pretended to be his manager and pocketed additional reservation fees for his appearances. However, the assistant then turned the tables on him and stated that the rapper still owed her 250,000 dollars. She claimed to have paid out of her own pocket to cover tour expenses, including hotel bookings. Fetty initially reimbursed her, but then left her with a balance of more than $242,000.

She never saw that money again and claimed that she could substantiate her accusations with appropriate receipts.

In 2020, the case was settled in court. Fetty was ordered to pay $1.1 million in damages after being found guilty of defaming Morgan’s reputation.

In 2015, Fetty Wap was involved in a motorcycle accident in his hometown of Paterson, New Jersey.

The rapper was riding his motorcycle in the early morning when he collided head-on with another vehicle, leading to 3 broken bones in his leg. The driver of the car was injured as well.

Not long after, Fetty was notified of 3 proceedings against him. He had failed to produce a vehicle registration card, had no insurance or driver’s license.

In March 2018, Fetty Wap admitted “to having been drunk driving on a Brooklyn freeway.” He was ordered by a judge to pay a small fine and participate in several safe driving programs, as the New York Daily News confirmed.

Wap sat at the wheel of a Mercedes Benz in 2012 and raced down the Gowanus Expressway “at least 105 miles per hour in a 55 mile per hour zone” in November 2017.

He was charged with “reckless endangerment, unlawful speeding, drunk driving, aggravated unlawful operation of a car and illegal lane changing”. He finally pleaded guilty to having been ruthlessly endangering and driving during his drug frenzy. Had Wap brought the case to trial, he could have spent “up to four years behind bars.

Instead, he was ordered to participate in a two-day driver improvement program and a 14-hour program for traffic violations.

With his lawyers and accountants’ help, Fetty Wap has allegedly been able to increase his fortune by investing in stocks.

In 2018, he helped to launch a successful cell phone game about street racing. Ironically, Fetty Wap was arrested the same year later for drag racing.

For this reason, the fertile father figure is said to spend a whopping $100,000 each month on child support.

First, there is Wap’s childhood friend Ariel Reese, who is said to have inspired the hit “Trap Queen.” The couple has a son, Aydin Zoovier Jr. (born 2011), and says they have been in each other’s lives for over a decade.

In January 2016, Love & Hip Hop: Hollywood star Masika Kalysha came forward and claimed that she was pregnant with his child. The then 24-year-old rapper was having none of it. At least not at first.

Wap first completely denied being the father and then told The Shade Room that Kalysha had set him up. “She knew what she was doing,” he told the news outfit, adding, “I wasn’t just some random guy in the club. … she knew I was going to be there, and that’s how it happened.”

He then openly admitted to having “unprotected sex” with Kalysha, and that “it was all planned by her.”

Wap then referred to rumors he had heard about her and “soccer players and basketball players” and made this contradictory statement: “Congratulations to her and whoever (the father).”

Given the drama, Wap fans were shocked when the rapper decided to rush from New Jersey to Los Angeles in March 2016 as soon as he realized that Kalysha had gone into labor. He even let the fans know that he was in town for the big moment. This is the day Khari Barbie was born.

Next, there is Love & Hip Hop’s Alexis Skyy, who gave birth to daughter Alaiya Grace in January 2018. Alaiya was born three months prematurely in January 2018 and is reported to be suffering from hydrocephalus. This is a chronic neurological condition caused by an abnormal accumulation of cerebrospinal fluid (CSF) that causes pressure on the brain,” according to the Hydrocephalus Association.

As reported in Weekly Contact, the little girl had to undergo emergency surgery to repair a defective implant in her brain designed to drain the fluids. Fortunately, everything went well. Skyy Instagram from the hospital (via people) and asked her followers to send “Prayers please for my baby” before confirming that the “surgery went well, thank GOD. She added, “Thank you for your prayers, Lay Lay is good” before sharing a photo of her little laugh (above), which she titled “Princess. We are going home. GOD is so good.”

In March 2018, another child with Wap, a little boy named Zy, was born just two months after Alaiya.

Fetty is also rumored to have two secret children with two unidentified women.

Fetty wap was named “the hottest rapper in the world” (Sexiest Man Alive) by “Glam’Mag” in the October 2020 issue, after having received the same title a year prior.

Could that be related to his perfect set of teeth?

When Fetty Wap smiles, he smiles with money. In 2016, TMZ broke the story that Wap actually dropped $80,000 on brand new teeth after a visit to celebrity dentist Dr. Mojgan Fajiram.

He demanded “the straightest, whitest teeth possible” and was given porcelain veneers on each tooth top and bottom. All in all, Wap got work done 20 teeth!

Dr. Fajiram calls herself “NYC’s Top Cosmetic Dentist.” It seems that she is the place to go for many rappers and celebrities. In fact, over the years, she has built an impressive A-list clientele, including Swizz Beatz, Idris Elba, Fat Joe, and DJ Khaled. All of them have appeared frequently on her Instagram.

In June of 2019, Fetty allegedly assaulted a woman at his Los Angeles home. Lanie Langlinais was attending one of his parties and was pushed, choked, and grabbed by the rapper, who also threatened to kill her after he became heavily intoxicated.

In September of the same year, Fetty Wap was arrested in Las Vegas for punching a security officer 3x in the face. The guard had arrived to break up a scuffle at a valet area of The Mirage resort on the Las Vegas Strip.

Fetty Wap’s rise to fame has been nothing short of astounding. In 2015, he became a millionaire with several hit singles in his name.

Only a few years prior, he had been a homeless drug dealer. The rapper continues to make a splash creatively and manages to dominate the headlines for less glorious reasons. These are all the ingredients for a life lived to the fullest, and we can’t wait to see what’s next in store for Willie Maxwell, a.k.a. Fetty Wap!