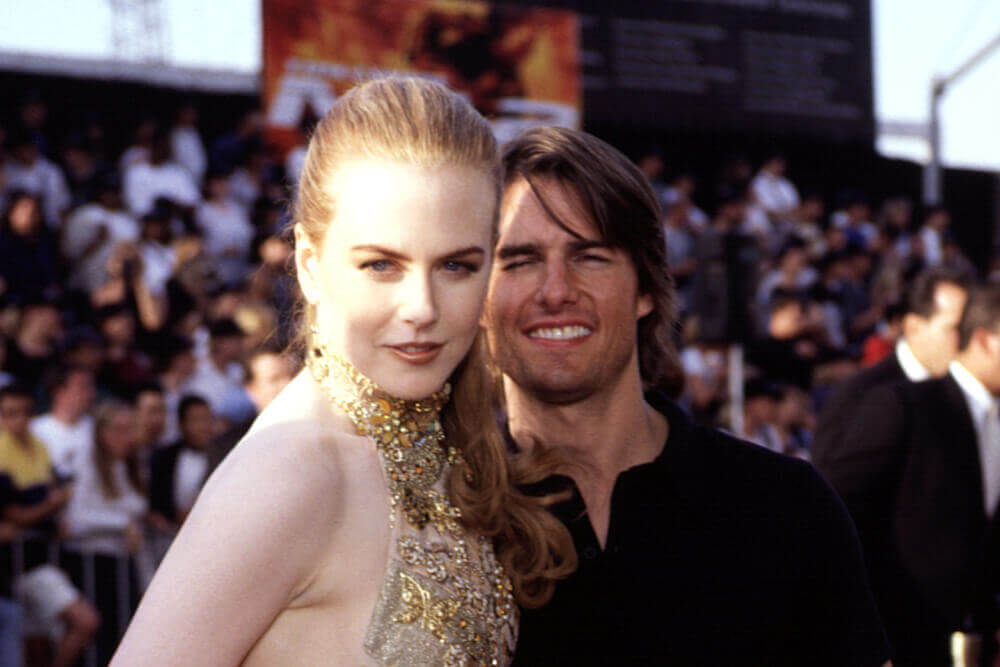 Since the 80s, Tom Cruise has been “that guy,” the one that every woman desires and every man aspires to be. When he started dating a gorgeous Australian beauty who was on her path to become one of the most successful actresses in Hollywood, media was bound to be fixated on the biggest power couple.

As soon as Tom’s divorce from his first wife was finalized, they tied the knot in 1990, and everyone thought they were the couple that would stay together forever.

In their public appearance on red carpets, they looked drop-dead gorgeous, and their go-to pose was looking lovingly into each other’s eyes.

Everything was going great until 1999, that year they starred together in Stanley Kubrick’s film Eyes Wide Shut.

Many body language experts and psychoanalysts have said them working on this movie was the beginning to their end. Then in 2001, Tom Cruise filed for divorce, shocking both fans and his wife, Nicole Kidman. There has been enough written about their union, but the couple still refrains from talking about each other, even after two decades.

There have been only a few exceptions where Nicole has said something about their divorce, like the joke she cracked at David Letterman’s show about being able to wear heels again.

Still, some theories are more convincing than others, especially after so much has come to light since their divorce.

When the Australian film actress married Tom Cruise, she was just 23 years old. Most actresses are giving their best shot to bag the biggest roles at that age, but Nicole Kidman wasn’t one of those. She met Tom, and then soon, her life was all about supporting him. The passion wasn’t felt by Nicole alone. Tom felt it too.

When Cruise first saw her, he asked his good friend Will Smith to invite her to the Oscar after-party. At that party, Tom swooned her with his effortless charm and devilish good looks.

Going to that party changed everything for Nicole, and then all she wanted to do was get married to Cruise. They were young in love, and Nicole Kidman saw him as her happily ever after. In her Vanity Fair interview, she even said that all she wanted was to have his babies and live a blissful life with him.

Sadly, soon their whirlwind romance wore off, and eventually, Nicole had to accept some harsh realities about her marriage.

While the Big Little Lies actress was all about starting a family early on in her marriage, it seemed like luck wasn’t at her side. She suffered a miscarriage at the beginning of their marriage.

Nicole has talked about how the grief of miscarriage is still not as talked about in society. Soon Kidman got the bad news that she might never conceive successfully due to some complications.

This broke her, but they still tried to make a family by going down the adoption route. Four years into the marriage, the couple adopted two children, Connor Cruise and Isabella Cruise.

Nicole really wanted to have Tom’s children, so she tried again towards the end of their marriage, resulting in another miscarriage.

The couple had just celebrated their 10th anniversary but only a few months later, Tom filed for divorce, which is why Nicole felt betrayed by him.

Kidman said she didn’t even get a chance to fully process her miscarriage when she got served with papers.

Scientology Was Behind It All

Everyone who knows Tom Cruise knows two things for sure; first, that his movies are always a blockbuster success, and second, he is a devoted Scientologist.

Since the 80s, he has been a huge part of it, and still today, he’s their most popular practitioner.

When he joined Scientology, not many people knew about it, and the leaders were rather secretive about it. With all the news that has been reported about them since Tom and Nicole’s split, most people are convinced that the leaders of Scientology were behind their divorce.

It has been speculated that Nicole was trying her best to make Tom leave Scientology since she didn’t want their children to be raised under those beliefs.

This didn’t sit well with the high ranks Scientologists, and they decided to get Tom away from her.

Rumor has it that they had done the same with Tom’s first wife, Mimi Rogers, when she tried to convince Tom to leave the church of Scientology.

Looking back at all of Tom’s divorces, it is clear that there were definitely some 3rd parties involved.

Since his career took off, Tom has been the bonafide Hollywood movie star. He has seen highs that many actors can only dream off. Even today, no new hero will dare to release his movie the same day as him.

While he may look like a dream on screen, especially in his billion-dollar film franchise Mission Impossible, clearly, it isn’t the case off-screen.

In an interview after their divorce, Nicole said she felt undeserving of every event she attended. For the first time, she addressed the insecurity she felt at those high-profile awards shows.

For her, it was merely about putting on a beautiful dress and be Tom’s supportive wife but the moment always has to be his.

This wouldn’t have been as bad if she wasn’t such a capable actress herself.

Instead of supporting him and celebrating her success, Tom liked to see her just as her cheerleader on all these shows where she was later the recipient of these prestigious awards.

When the Aussie actor got married to Tom, he was undoubtedly the bigger star out of the two. During the time of their marriage, he only got more powerful with every single box office success.

That decade was extremely important to Nicole too, but she happily sacrificed her career to be with Tom. Her agent had even warned her about tying the knot early on in her career.

At that time, Nicole was head over heels for the Mission Impossible star and didn’t care about her fame.

Today, when Nicole talks about that phase of her life, she acknowledges that marrying young was not smart. Tom was visibly the more powerful one in their marriage, and as Nicole grew older, that started bothering her.

After getting a divorce from Tom, Nicole struggled to have a good relationship with their children Bella and Connor.

One of the cracks in their marriage came from Nicole trying to keep their children away from Scientology. But after the divorce, the children were brainwashed into hating her. They even stopped calling her mom and addressed her as Nicole, which she hated.

In 2006 when Lee Anne Devette interviewed Bella, she said they like to call Katie “Mom” and won’t even like to meet Nicole if they had a choice.

For years, they had a rocky relationship.

When Bella got married, both of her celebrity parents weren’t invited. While the children have been vocal about their estranged relationship with Kidman, the Australian movie actress has always talked fondly about them.

She even accepted the fact that both Connor and Bella are Scientologists, just like their father. Nicole said as a mother, all she can do is support them through all the decisions they make as adults.

Since the divorce from Nicole, the award-winning actor has been strictly silent about his personal life.

He only once said, “Nicole knows why,” when inquired about their divorce. Tom doesn’t give many interviews, so it’s nearly impossible to get any information out of him.

Even when he does, the questions are filtered and approved by him. Usually, the interviewers are told that personal questions are off-limits especially surrounding his marriage and divorce. After leaving Kidman, he momentarily found his soulmate in Katie Holmes.

Katie was a huge fan and even said in an interview that she wanted to marry Tom. The couple became proud parents to a daughter named Suri, but then this time around, Katie was the one who filed for divorce.

Do you remember the incident where Tom failed to open the car door for Katie?

After leaving Tom, Nicole’s biggest worry was having a lonely sort of existence and never finding love.

She thought what she had with Cruise was everlasting, but that wasn’t the case.

But then Cupid struck again, and she met the country crooner and a fellow Aussie Keith Urban. They dated for a while and eventually got married in 2006.

In 2008 Nicole gave birth to their first child, a daughter named Sunday Rose, and in 2010 they welcomed another daughter via surrogate, Faith Margaret.

Today Nicole Kidman is one of the most accomplished actresses around. She recently swept all the awards for her excellent portrayal of a wife who was a victim of domestic abuse in Big Little Lies.

Nicole only recently talked about his much-speculated married life with Tom. In the Vanity Fair interview, she surprised fans by saying their love was real till it wasn’t, and even after they went their separate ways, she is grateful forever for spending time with him.