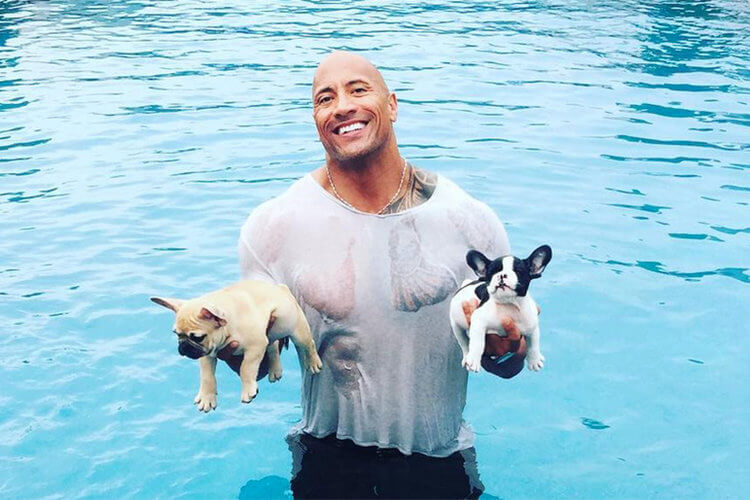 A couple of years ago, to see a French bulldog was difficult. In fact, you probably wouldn’t even have known what kind of dog it was. Today, however, French bulldogs, also known as Frenchies, are trending, especially among the rich and famous. These days, celebrities and pets go hand in hand, but for some famous people, only one dog breed fits the bill: the French bulldog.

Check the following celebrities who currently own a French bulldog as a pet companion.

Hilary is known to love having many 4-legged friends roving in her house, and she even rescues pets. In 2014, she added Beau, a cream puff Frenchie to her crew. In early 2016, unfortunately, Hilary shared through social media the devastating news about the passing of Beau.

But by mid-2016, Hilary opened up her home and heart once again to a new Frenchie going by the name Peaches. Now perhaps you are thinking Peaches has a familiar look. You are not far off as she is Beau’s sister.

Madonna has joined the ranks of celebrities with French bulldogs as is evident on her Instagram page. To celebrate her 57th birthday, the ever-green “Material Girl” shared what she termed as the “best birthday present ever”.

This was a new Frenchie pup that the versatile singer, actress, and producer has named Gypsy Rosa! The Queen of Pop is not just adopting children; she now has a 4-legged addition to her house. Madonna often shares photos of her Frenchie via Instagram.

If you enjoy Chef Mario Lopez’s culinary creations, then you might be forgiven if you are jealous of his 4-legged pal, who is allowed to sit by his side and follow every step. Often, the Frenchie pooch is on television by his side, at times sitting on the kitchen counter as the famous chef gets his ingredients together.

While a dog might not be the best idea in a kitchen, Mario Lopez’s docile Frenchie seems to be giving the Master Chef lots of inspiration.

Lady Gaga needs no introduction. Let’s just say she has brought an addition to her brood! Gaga has added someone new to her circles, a big brother to Asia who goes by the name Koji. According to Gaga herself, Koji stands for “little one” as the Frenchie is so small.

Just follow her on Instagram to see what she has posted and said about Koji. We are eagerly waiting to see what kind of trouble the little one gets into as he plays with the big sister, Asia.

The enigmatic Di Caprio has been the king of the screen with blockbuster film after blockbuster, but he now seems happier as he holds Django, his French bulldog. As the highly acclaimed and handsome hero of great movies like “The Titanic”,“The Great Gatsby,” and “What’s Eating Gilbert Grape?”

Leonardo Di Caprio has a reputation of swapping beautiful leggy supermodels one after the other. However, we don’t expect him to be changing his canine pal, Django, any time soon.

The actor, professional wrestler, and producer has not been left behind by his celebrity peers when it comes to owning the trending pet.  After the untimely passing of Brutus, the Rock’s new fur-baby Hobbs seems to be settling nicely into the family lifestyle.

When you are a fitness fan, you need company as you hit the road and Dwayne Johnson knows this all too well. That’s why his buddy, Hobbs, follows him wherever he goes including the gym.  The wresting hero has also shared many of his Frenchie’s milestones via Instagram and that includes his first flight!

Largely because of their appealing looks, French bulldogs are a favorite of the world’s famous. They are not only quite photogenic but easy to carry along, even on a plane. You may want to pick one for yourself for that “famous celebrity look”.

Sorry, no posts were found.