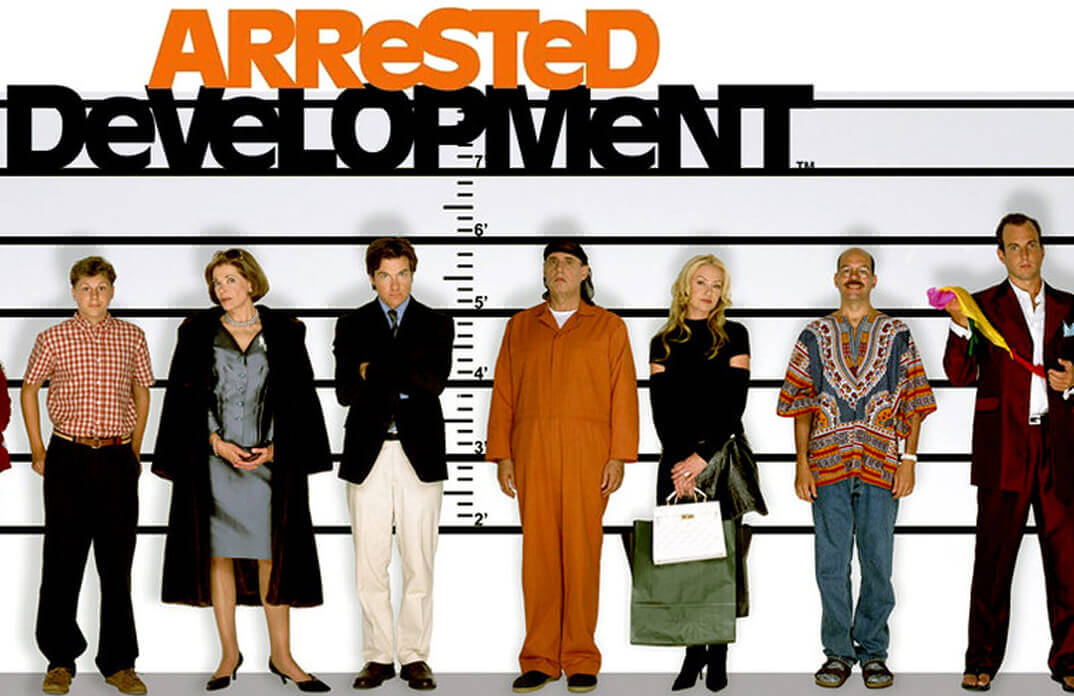 Some shows don’t get their due when they are released, but as time passes, they gain a “cult status,” Arrested Development was among those. When it first premiered in 2003 on Fox, it had no chance in front of America’s beloved sitcoms.

It was an eccentric show about a corrupt wealthy family who had gone bankrupt. The characters were designed to be insufferable. The only guy who had a sense of right or wrong was the middle son and C.E.O. of the Bluth company, Michael Bluth, portrayed by a very likable Jason Bateman.

Today Arrested Development has made its name for being way ahead of its time. When the original seasons had aired on the cable television network, the whole world was under the spell of shows like Friends.

Millions adored the characters on that primetime 22-minute sitcom, and their plotlines were simple enough to be enjoyed by everyone. At that time, Arrested Development was the show trying everything in its power to be different.

Its characters weren’t likable, and the single-camera set-up was purely experimental.

This was the time when the audience was used to hearing a laugh track after every punch line.

Eventually, in 2006, it got axed, which made American pop culture finally notice the show that had successfully introduced dark comedy to the sitcom world.

It is a no-brainer that the reason why FOX canceled the show was due to extremely poor ratings. The advertisers couldn’t see why they should get behind a show that was a comedy genre but didn’t have any common element.

The show had no laugh tracks, studio audience, or any popular running gags. Every character of that awful family was self-centered, sarcastic, opportunist, and horrible without any valid reason.

Michael was the only correct person in the entire family in the initial seasons, but his character wasn’t exciting enough to keep the viewers glued to their T.V. screen for him.

By the time America was ready for the craziness of the Bluth Family, the show’s plug had already been pulled.

While the executives at FOX had seen the potential in the acclaimed sitcom, they still couldn’t do anything to keep it running. The channel had to listen to advertisers, and they weren’t interested in a show that didn’t have a larger audience.

The first season received immense praise from the critics, but the ratings were less than impressive. Due to poor ratings, the second season only got green-lit for 18 episodes, and the timing was also revised.

The series was now to be aired after The Simpsons.

Much to Mitch Hurwitz’s surprise, the second season saw even lesser ratings, so the cast and crew were prepared to hear the bad news. Surprisingly, the show got renewed for the 3rd season, but the episode count was cut to 13.

The series finale was at the same time as the Olympics opening ceremony, which made the decision easy for the executives. They voted its official cancellation after season 3.

Arrested Development saw a booming success in the sales of the DVD set. The legend goes that it was purchased by mostly college freshmen who were ready for an edgy comedy.

Word of mouth got stronger as the years passed, and a whole new generation started discussing the previous seasons on the internet forums.

This caught the eye of Netflix, a giant streaming platform that is all about producing what the audience wants to see. They made a deal with Fox and finally gave fans the great news of the release of season 5 after eight years.

Finally, the fourth season aired in 2013, but the show didn’t deliver what they wanted to fan’s dismay.

Die-hard fans of the classic comedy series arranged a viewing party when season 4 came. People binge-watched it and were ready to make it the smash hit, but then the reviews started rolling in.

Scheduling conflicts of the busy cast members was why there were hardly any scenes with more than three actors in the last two seasons on Netflix.

Around the time when the MeToo movement had just picked up, a scandal about the Bluth family patriarch Jeffrey Tambor (George Sr. Bluth) shocked the viewers.

During an all-cast interview ahead of the release of the fifth season, Jessica Walter(Lucille Bluth) said that Jeffrey had yelled at her, and no one from the production team came to help her.

Even while she was telling the incident, other cast members tried their best to change the topic. That interview went viral for all the wrong reasons. The reaction of angry fans was enough for Netflix to fire Jeffrey, but the audience wasn’t very happy with fellow actors either.

When season 5 premiered, everyone could see what a mess this once-legendary show had become.

The cast was visibly not getting along, and some of them were desperately trying to leave it. In 2020, David Cross, who played Tobias Fünke, confirmed the cancellation of season 6.

He said there was no good script, and the cast was not interested in getting back together for another season.

Even after the questionable comeback, one cannot forget the legacy of this show which paved the way for many of your favorite American live-action sitcoms like Bojack Horseman.