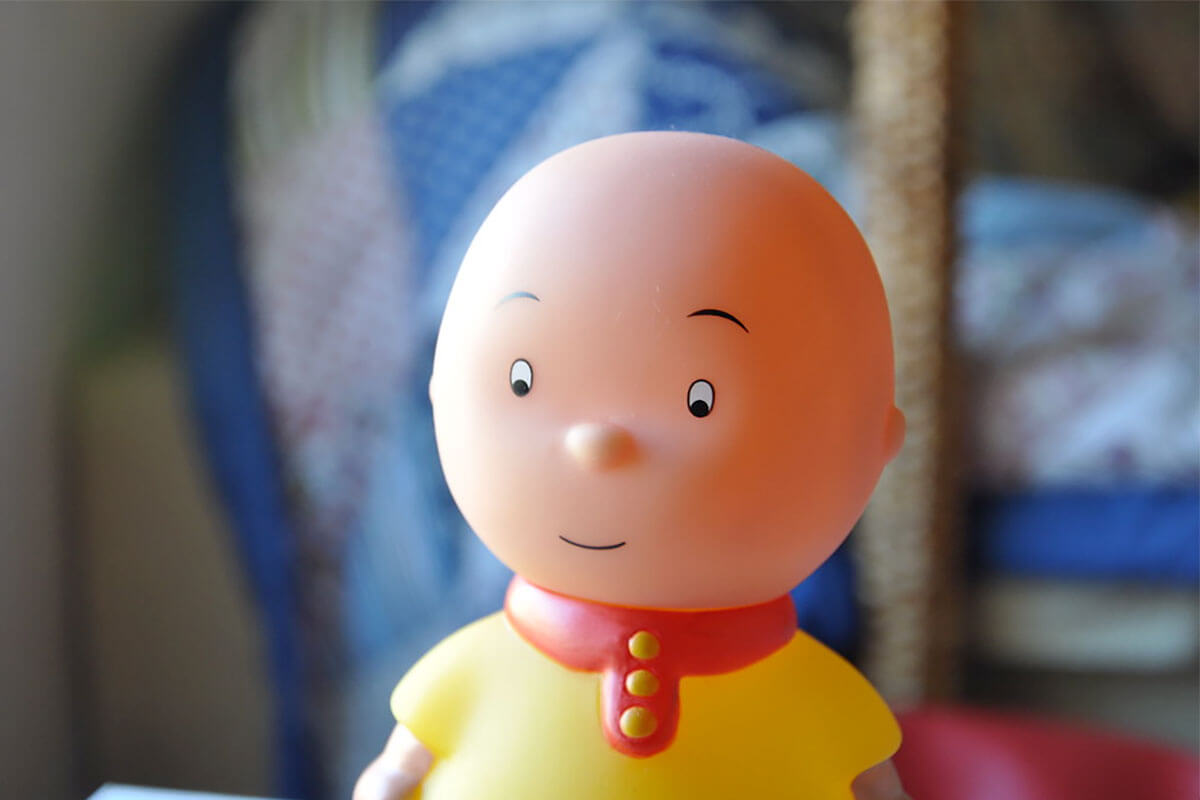 The Canadian children’s education series was immediately a hit when it aired on television in the late 90s. Viewers, especially parents, seem to have a love-hate relationship with the show’s main character, Caillou, whose imagination is impressive, but his constant grumpiness many find off-putting. The fact that he is still bald at age 4 seems even more annoying.

So flustering is Caillou’s conspicuously bald head that it has been a subject of raging debate many years after the Canadian TV series aired.

Seriously though, why does Caillou have no hair? Why is this four-year-old still bald? The reason might amuse and surprise you at the same time. Read on for possible theories why Caillou is bald.

What Is Caillou About?

The 1990s was fraught with all kinds of children’s shows that we now consider classics, including Sesame Street, Batman, South Park, and many others.

Caillou, featuring a conspicuously bald toddler with a wild imagination and an often grumpy mood, is one that we can’t ever forget.

Caillou was a Canadian children’s television show based on a series of books of the same name written by French-Canadian author Hélène Desputeau and Christine L’Heureux for Chouette Publishing.

The series graced our television screens in September 1997 and wrapped up in 2010. Each episode features Caillou, a titular character (voice-over first by Bryn McAuley and later Jaclyn Linetsky and Annie Bovaird) who lives with his parents and sister Rosie (voiced by Brigid Tierney and later Jesse Vinet). The toddler uses his extensive imagination as he explores the environment around him.

While the Canadian preschool education television series seems straightforward, some parents and adult viewers have expressed annoyance with Canadian networks for airing the children’s program. Their sentiments stem from Caillou’s constant grumpiness, which sometimes overshadows the whole point of the show.

His whiny personality has led to Caillou becoming quite infamous. What attracts even more attention is his bald head, which has become a source of all kinds of speculation, urban legend, and controversies in television.

What Does The Name Caillou Mean?

The name Caillou is already peculiar. Everyone in the educational children’s series has familiar names such as mommy, daddy, grandpa, grandma, and Rosie.

According to the show’s official website, Christine L’Heureux and Hélène Desputeau wanted to honor the French pediatrician and psychoanalyst Françoise Dolto.

In French, the word Caillou means small stone or pebble, which Dr. Françoise Dolto asked children to give her as a ” symbolic payment” for her consultations. She created this ritual to uphold her philosophy of respect for children as people.

The Reason Caillou Has No Hair

The debate over why Caillou does not have hair has raged for years. In some circles, it was rumored that the toddler had cancer, which led to hair loss.

According to critics of the animated television series, Caillou is sick, and it is why his parents give him anything he asks for despite his unruly behavior. This particular dynamic about the Caillou channel bothers viewers so much; they complain about the message the show sends to impressionable children.

Others have jested that Caillou doesn’t have hair because he ‘sucks,’ referring to his whiny personality.

But, jokes aside, Caillou’s baldness points back to the content of the books on which the show is based. The Caillou website explains that when Caillou’s character was created in 1989. he was written as a nine-month-old baby.

For the animated television series, Caillou was aged up to a four-year-old toddler with an average height of two to four feet. But, according to Chouette Publishing, adding hair to the boy’s head would make him unrecognizable. The show’s creators, therefore, decided to leave his head as it is to avoid confusing kids, who are the show’s main audience anyway.

Producers of the television series further state that Caillou’s baldness may make him different. But, they hope it helps children understand that there is no problem with being different. So, after all, his baldness can be used as a learning prompt.

According to the Caillou website, young viewers don’t notice Caillou’s hairlessness at all. If the boy’s baldness doesn’t bother the target demographic, then it is the least of the producer’s worries.

Regardless of how you feel about the Canadian cartoon, we hope that Chouette Publishing has provided a good enough answer to the eternal question: why is Caillou bald? Hopefully, we can now close this decades-old debate once and for all.