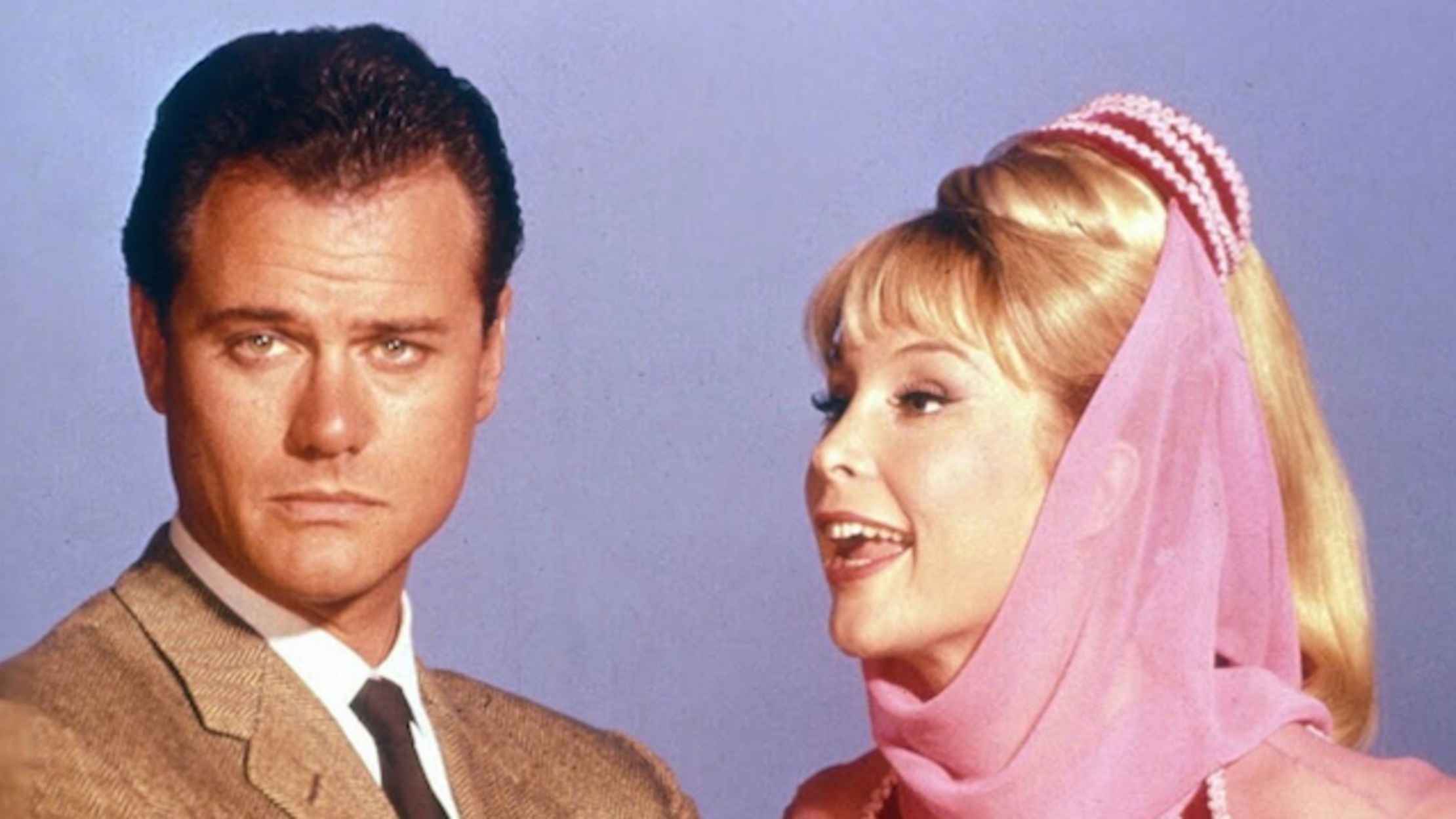 More than five decades ago, on September 19, 1967, the “Charming Jeannie” (in the original “I Dream of Jeannie”) flickered across television screens for the first time. At that time, everyone would have loved to swap places with Major Nelson (Larry Hagman), who found the beautiful female genie Jeannie (Barabara Eden), who would fulfill his every wish.

Nasa astronaut Anthony “Tony” Nelson finds a mysterious bottle after an unplanned landing on a remote island in the fantasy sitcom. When he opens it at home, he frees a beautiful blonde who has been locked up for 2000 years. She falls in love with her rescuer, but her unconventional way of fulfilling his wishes always gets him into trouble.

Tony’s supervisor, the Nasa psychiatrist Colonel Dr. Alfred Bellows (Hayden Rorke), and his busy wife Amanda (Emmaline Henry) are often brought to the brink of madness. Reason: they are unable to uncover the secrets surrounding Major Nelson that are seemingly connected to magic.

In his desperation, Dr. Bellows turns to his general to deal with “the abnormal behavior of Nelson,” but regularly fails and is himself considered confused.

Only Tony’s best friend and colleague, Roger Healey (Bill Daily), is privy to Jeannie’s magic, which she performs with crossed arms and the blink of an eye.

Roger often has unfair intentions and is always looking out for his advantage; Jeannie usually remains completely clueless. That she must obey her master does not distinguish her at first glance from the role model of other wives of the time. At the end of the last season, Jeannie and Tony get married.

Jeanie as a television icon

In the techno-crazed 1960s – U.S. President Kennedy had made the moon landing a national priority – Jeannie became an icon of humorous, light T.V. fare.

According to the strict chastity rules of American television at the time, she was not even allowed to appear in Tony’s bedroom. Since they were a single couple, long kissing scenes were also forbidden. Even her belly button was taboo. However, in various episodes, the beautiful genie’s navel can still be seen thanks to a costume-malfunction.

When actress Barbara Eden wanted to present Tony (Larry Hagman) in a comedy show, it caused a scandal and led to arguments among T.V. bosses. Eden’s appearance on that comedy show was ultimately canceled.

Jeannie’s magic knows no boundaries: When she wants to sell Tony’s house, the real estate agent complains about the “tiny” property.

She then makes tennis courts, stables, and a castle-like dining room appear out of thin air.

To create more relaxation time for her master, every day becomes a Sunday. With the help of her magical powers, she also turns Tony into a piano virtuoso, pool billiard pro, or unbeatable poker shark.

He only reluctantly accepts the conjured up abilities and all the riches.

Instead, he would much rather teach her to cook and clean by herself.

But Jeannie never means any harm.

There is only one thing that sets her off: when another woman comes into play.

Five seasons of “I Dream of Jeannie”

I Dream of Jeannie” was shot in five seasons until 1970, the first one still in black and white. The U.S. premiere was on September 8, 1965. Bestselling author Sidney Sheldon had developed the basic idea and gave the 1001-night fairy tale a contemporary spin.

He also wrote the screenplay for 55 of the 139 episodes. Hugo Montenegro composed the music. The series was resold to many small stations after it first aired on NBC, where it had premiered with relatively moderate success. Throughout the 1970s, it developed into real ratings hit with cult status due to the reruns – akin to “Star Trek.”

Where did the “Charming Jeannie” come from?

In Islam, a “djinn” is an invisible, demon-like being. Through the story “Aladdin and the Magic Lamp” from Thousand and One Nights, the myth of a trapped spirit in a vessel which, once opened, swears obedience and fulfills wishes was created. The title of the series is a play on words in English because the name Jeannie sounds the same as the English word for “djinn” (“genie”).

The title role in harem pants and with a head veil had made Eden a television star overnight. During the original broadcast of the series, she was so popular that her pin-up pictures hung in soldiers’ lockers.

She was also made into a puppet, and her portrait adorned plastic bottles and comic books. After that, she appeared in Las Vegas and even presented her own “Barbara Eden Show” on television in 1973.

In 1985, at the age of over 50, she was voted the woman with the most sex appeal by “People Magazine.” After shooting the series ended, Barbara Eden slipped into the Jeannie costume for two more films: 1985 in “The Return of the Charming Jeannie” and 1991 in “Jeannie is looking for her Master.”

As she wrote in her 2011 memoirs, “Jeannie” was not a glamour life. In it, she also described unsuccessful years of depression, two failed marriages, and her only son Matthew’s drug death. She also touched on Hagman’s eccentric failures on the set of the show.

Today things have become quieter around the actress. In 2013, the then 81-year-old showed herself once again in her signature role at the Vienna Life Ball in a belly-free, oriental outfit.

Larry Hagman played the baddie, J. R. Ewing, in the television saga “Dallas” from 1978 and became an eternal T.V. legend himself. In his private life, he made the headlines with his alcohol consumption and liver transplants; in 2012, he died of throat cancer.

Why did the show get canceled?

In this 2004 interview, Hagman revealed that he learned about Jeannie’s 1970 cancellation from guard on the studio lot. After returning from South America after previously completing the series’ fifth season, the actor wanted to grab something from his dressing room. He bumped into the guard on his way out, who broke the news to him that there were no plans for a sixth season.

Hagman wasn’t surprised. The ratings had been dropping ever since Jeannie and Tony had been married on the show, removing the underlying “sexual tension” that had kept the audience glued to the screen for four seasons. NBC also thought that it had enough episodes (139) to start reruns.