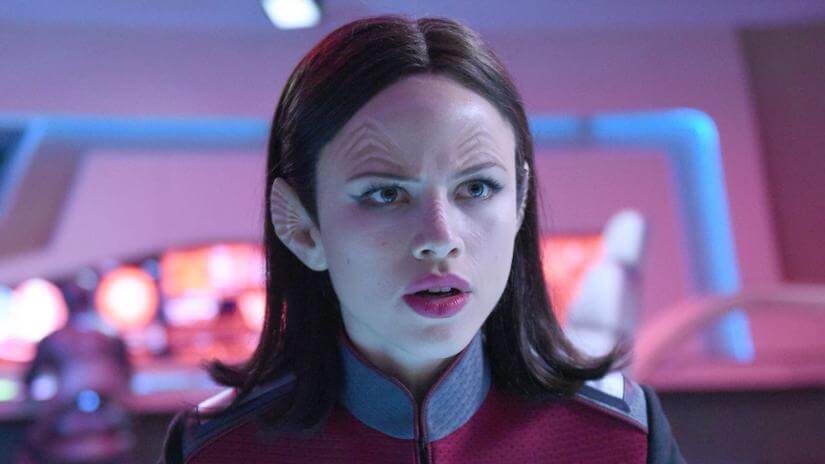 Writing off a character is a challenge to any reality TV show or series (except for shows such as Game of Thrones, where it’s never a big deal). While other TV networks will be kind enough to provide a realistic explanation of where a character is headed, others just write nary farewell scenes or simply give a word of exposition to put their followers’ minds at ease.

Fox seems to have applied all the mentioned tactics to bid farewell to a key member of The Orville’s crew, chief security officer, Alara. Sadly, the character’s departure also marked the exit of a great actor from the show, Halston Sage!

The Season 2, Episode 3 of the show, “Home” aired on 10th of January 2019 and saw Halston Sage’s character, Lt. Alara Kitan, resign her position aboard the USS Orville.

This episode led to a lot of speculations and discussions among the show’s viewers, especially with regards to the actress and the future of Lt. Alara in the show.

The character had a devoted fanbase who has seen Alara join the Planetary Union, where she was quickly promoted to Chief of Security. She later won the Sapphire Star for bravery, when she commandeered the Orville in a bold rescue of Captain Ed Mercer and First Officer Kelly Grayson from the Calivon.

So, Why Did Sage Leave the Show?

Well, nobody has ever come clear about it. Fox never gave a reason for writing off Lt. Alara of The Orville or for bringing in Jessica Szohr as the new Xelayan. Neither the creator of the show, Seth MacFarlane, nor Sage have been forthcoming about it either. What we know is that she had good spirits for the whole thing though because, in a previous interview, she said that she “completely trusted the writers and producers of the show and that everything happens for a reason.”

So, we are not sure whether Fox intentionally wrote off her character or she chose to exit. We can only speculate.

Alara was a Xelayan, a fictitious space race whose home planet exerts a lot of gravitational pull, giving them increased power/strength in lower-gravity settings like on Earth.

However, with time, Xelayans tend to degrade in these lower-gravity environments and have to return home to renew their energy. By September 2420, her bone density had apparently decreased by five percent.

To make matters worse, she had also lost 20 percent of her muscle mass. Bad news for a chief of security! The final straw was Alara breaking her arm in an arm-wrestling with Isaac, the Engineering Officer aboard the USS Orville. Right after that incident, he returned to Xelaya to regain her strength.

For the next few days, she stayed on Xelaya with her family, where old tensions resurfaced, which lead to a bonding retreat to the Kitan family’s beach house. With her body fighting the strong gravity of her home planet, she had to remain in a hovering chair during that time.

Before long, Alara received word from the Orville’s Chief Engineer, John LaMarr, that Claire Finn had developed gravity treatments that would allow her to stay aboard the Orville while fully recovering. In an unexpected turn of events, Alara decided to remain on Xelaya to mend her relationship with her family, which marked her character’s exit from the show.

From the narrative perspective, therefore, we can figure out why the series regular was replaced with a new character.

However, what is still confusing is that Fox Network confirmed in a past interview that Sage was officially gone for good. So, sage’s departure cannot be explained by a narrative reason alone—there must be other factors. Let’s dig deeper.

While Season 2 episodes of The Orville was still in production, some eagle-eyed viewers had noticed that Halston Sage was filming other projects. For instance, Sage was to appear in a movie, The Last Summer, where she was to star alongside legends such as K J Apa.

It is reported that the movie and The Orville series filmed in different cities concomitantly, which might have required the star to appear in a few episodes of the TV series. This might even be the primary reason why Sage left the show.

Will She Ever Return To The Show?

One interesting thing about Sage’s exit from The Orville is that it wasn’t one with a closed ending. In confirming her departure, Fox indicated that should she ever want to come back to the show or if there was an opportunity in the narrative, the door will remain open.

However, it is also worth noting that after The Orville, Sage auditioned and got accepted in a new Fox series, Prodigal Son. And given that Fox recently picked the new series for a new season in 2019-2020, Sage may not find time to appear in Season 3 of The Orville beyond a mere quick cameo, even if it is her wish to return to the show.

For now, the multi-talented actress, who once pursued a music career in her teens, seems to have found a new home on Fox’ Prodigal Son. We wish her all the best with the new show and hope to see more of Halston Sage’s on-screen talent in the future.