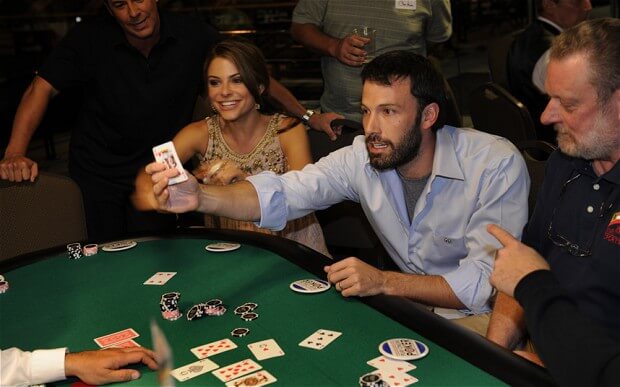 The Hard Rock Hotel and Casino in Las Vegas is where the who’s and who of Hollywood hang out for adventurous weekend trysts. For the longest time, one of its most frequent guests was Ben Affleck.

Not only is the Batman vs Superman star a brilliant actor, word on the street is that he is also a smart professional poker player. In 2014, though, it was reported that he was banned from playing blackjack at the Hard Rock.

What was the deal with that? We’ll give you the inside scoop.

Affleck and His Love for Gambling

Away from the big screen, Affleck dabbles in professional poker. It is however not clear how much he has won or lost from his gambling stints. What we know is that the two-time Oscar winner has participated in various professional poker championships including the California State poker tournament, in which he came out tops and walked away with $356, 400.

He also earned a seat at the World Poker Tour finals in 2004 and then progressed onto the World Series of Poker in 2009.

Many of his friends and those who have watched him on the decks say Affleck’s a ‘smart player’ who works to minimize his losses. That being said, he has denied having a gambling addiction. In one interview, he said that he wanted to “correct the impression that there is something wrong with it (gambling) or that it is some kind of compulsive activity.”

Back in May 2014, rumor had it that Ben Affleck had been banned from playing at the Hard Rock Hotel. Did he do something illegal that got him the boot? Was he, like, thrown out by bulgy security guards?

Well, according to the actor, the Hotel asked him to stop playing at the blackjack table for good. He confessed that he had become too good at the game and the cards were in his favor too many times. This raised suspicion among the casino dealers who eventually busted the Gone Girl star counting cards.

Asked whether he was literally thrown out of the casino, Affleck explained that the dealers were quite polite. The security guys just approached him and said he could no longer play blackjack but he was free to play other tables.

What Is Card Counting And Is It Illegal?

Before we get into the legality of card counting, let’s first get caught up on what this concept is all about. In the casino blackjack scene, counting cards simply entails keeping track of the changing disparity between big and small cards. This way, the player can determine the extent to which the un-dealt cards favor him.

Card counting is not illegal by any state or federal law standards. However, casinos frown upon this strategy. It turns out that card counters have up to 1.5% advantage over the dealer, so it makes sense why a casino wouldn’t be too happy with players pulling this kind of move.

Technically, Affleck was not on the wrong for counting cards. Like an eager player, he had taken time to master the game and had found a way to improve his odds through card counting. Ben laments the fact that when the media picked up the story they made it look like what he had done was illegal.

Just to set the record straight, the Hard Rock Hotel didn’t completely ban the actor from its establishment; Ben just can’t play blackjack there, but he is free to visit anytime. Maybe it’s time for Ben to “socially distance” himself from the analog casino world and move online instead and play Goldenslot?

While that was an unfortunate event, it has been almost six years since and besides his poker hobby, Affleck is still doing what he does best—giving us fantastic movies. You can catch him on the sports drama, The Way Back (2020), and later in the year, in Deep Water (2020), where he’ll star alongside current girlfriend Ana de Armas.