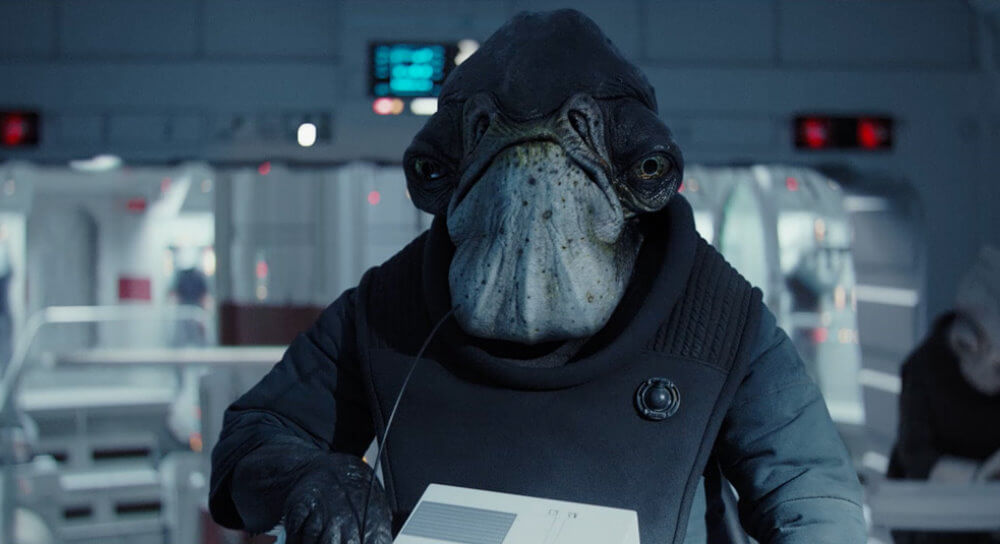 Any Star Wars maniac will fall in love with Rogue One. The movie is essentially a Star Wars story but with a twist of its own. Despite having the same plot as Star Wars trilogies, Rogue One is a separate anthology. What that means is that it is related to the trilogies but doesn’t directly connect to the storyline in any shape or form. Rogue One is set in 1977, right after Star Wars: Episode IV – A New Hope.

If you can recall, Episode IV ends at the point where Princess Leia makes away with the plans to demolish the Death Star and hides them in her droid R2-D2. Rogue One picks up the story by focusing on the rebel fighters in their quest to uncover the plans. JynErso, the lead character in the film, joins the rebel army and ultimately leads the team that is responsible for stealing the plans. In this post, we take a look at Admiral Raddus – specifically: what happened to him?

Who is Admiral Raddus?

Raddus is a Mon Calamari admiral who took part in the Galactic Civil War. He was the owner and commander of Profundity (his star cruiser). During the battle against the Imperial Naval Forces, Raddus commands the rebel forces and his weapon Profundity. Rogue One portrays him as a no-nonsense, brave, and resilient leader. Neal Scanlan, the supervisor for creature effects in the movie, says that Raddus draws his inspiration from Winston Churchill—United Kingdom’s prime minister.

The powerful leader led his country as they fought during the Second World War. Like Churchill, Raddus believes that the secret to conquering the empire is capitalizing on military muscle. He despises meetings to the core. He is very impatient during the everlasting committee meetings held by the rebel’s council.

The Battle of Scarif

After Rogue One Unit is set up with the leaders being Captain Cassian Andor and Erso, the respected admiral is alerted by one of his soldiers about an intrusion on Scarif. Raddus instructs the fleet to point towards the direction of the intrusion.

A Rebel technician also intercepts a signal showing the Rebel Alliance had intruded on Scarif. Without waiting for instructions on whether to launch an attack on Scarif or not, Raddus goes ahead and redirects Profundity towards the equatorial planet. Upon receiving the news of the attack, Chancellor Mon Mothma asks if she could speak to Raddus.

However, she is informed that the admiral had gone back to the ship to prepare to go to war. After scrambling and preparing, the Alliance Fleet is moved to the Outer Rim space. Profundity then exits hyperspace with Raddus in its bridge, who orders two Squadrons to offer protection for the fleet.

On the other side, another Squadron heads over via the Shield Gate, with the destination being the planet’s surface. The Squadron fighters initiate the task of crossing the gate, but its technicians close it and knock down two of them. The Squadron doesn’t pull through the gate as three of its wings have been closed off.

Raddus learns of this and issues an order to blast the gate and pull down the Star Destroyers atop it. Meanwhile, TIE fighters are positioned to take on the rebels and destroy Profundity. Raddus realizes that the battle is getting out of hand but decides to fight anyway. Gold Squadron bombards the Star Destroyer by causing it to lose power. A few seconds later, the admiral receives news that the all-important plans had been discovered, but the shield needed to go down first.

What happened to Raddus?

With the end in sight, Raddus pushed on with the tough battle. He celebrates the victory, but his joy is cut short when a soldier gives him the bad news that the Death Star is fast approaching. The admiral looks up the Rebel fleet to perceive the Death Star exploding the Imperial complex using its emerald superlaser.

He quickly instructs all the ships to move to hyperspace. Unfortunately, before Profundity jumps, Darth Vader’s Devastator shows up. The Star Destroyer fires its turbo lasers and damages the massive vessel weakening it completely.

The Alderaanian security troops get on the craft to copy the plans to a data card. Unfortunately, Vader boards the damaged vessel as well. He kills many rebels, but a handful of them manage to flee with plans. In the end, Profundity is destroyed with Raddus aboard it. The brave admiral perishes in the battle.

His death is not in vain, though, as it made it possible for the rebels to find and get away with the coveted plans. Several years after his death, his name is utilized by the Resistance as a tribute to the fallen leader.

Ever since Rogue One premiered, fans have been hoping that Admiral Raddus was not dead. Many are confident that since the producers didn’t show him taking his last breath, he might resurface in the future. However, the likelihood of that happening is very slim. The esteemed leader perished in the Galactic war.