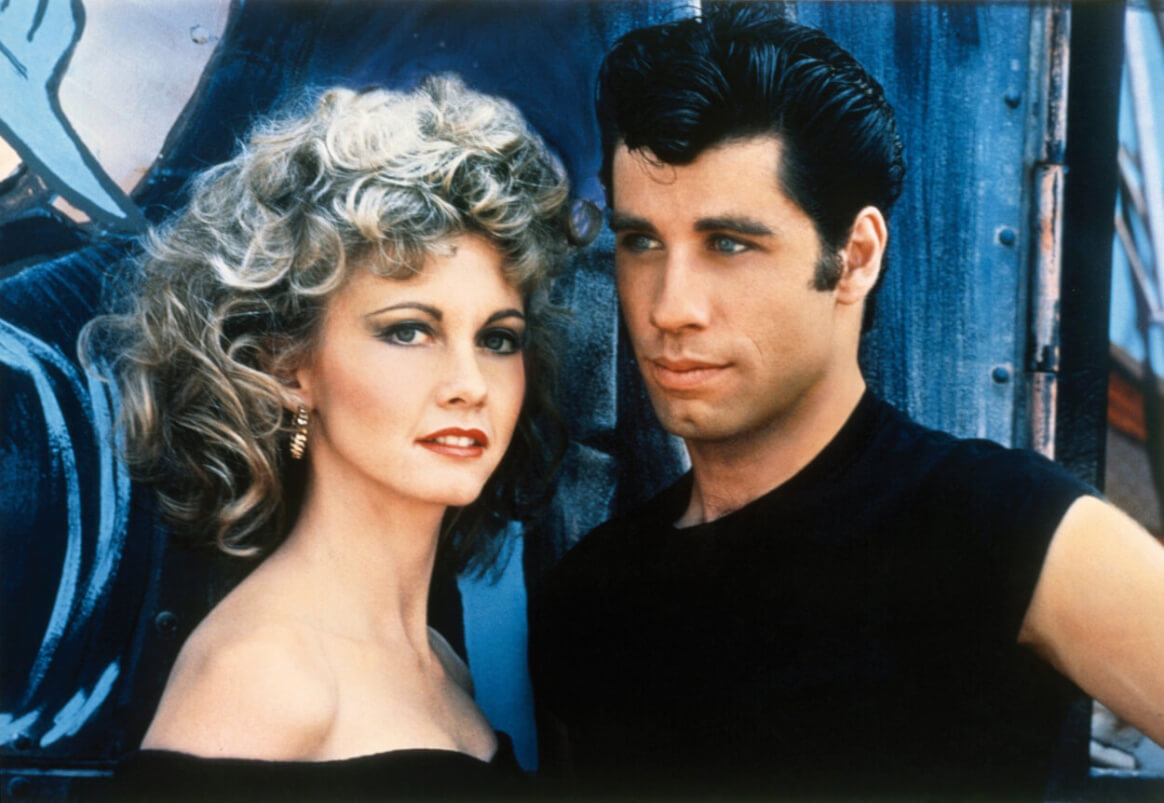 The classic teen movie Grease was a real Hollywood box office hit. It has been 42 years since it debuted, but people still talk about it.

It didn’t take long for the movie to become the 20th century’s highest-earning American musical film. How can you not fall for the teen love romance set in the 50s?

Sandy (played by Olivia Newton-John) and Danny Zuko (played by John Travolta), the two high school lovebirds, had great chemistry on the set, and it shows. The romance that started on the beach became one of the most compelling love stories ever.

It’s 1958 in California when greaser Danny and Australian Sandy Olsson (Olivia Newton-John) fall in love. When they go back to school, they have no idea they both now attend Rydell High.

Danny is T-Birds’s leader, a group of black leather jacket-wearing greasers, and Sandy hangs out with the Pink Ladies led by Rizzo (Stockard Channing).

When they clash at Rydell’s first pep rally, Danny is not the same as Danny from the beach, but they try to be like each other so they can be together.

The hit musical was followed up by the sequel “Grease2” in 1982, starring Michelle Pfeiffer. However, the flick couldn’t capture the chemistry of the original, tanking at the box office.

To picture the original Grease without its lead actors is next to impossible. However, it has come to light that Travolta was not the original cast for the film, produced by Paramount Pictures. That’s right; the director, Randal Kleiser, had a different cast member in mind for Danny’s role.

He initially asked Henry Winkler from Happy Days, who surprisingly turned down the golden opportunity.

Why Did Henry Turn Down The Role?

With the kind of popularity, Grease has amassed over the years, one has to wonder how anyone can say no to the opportunity of taking the lead role in the teen film. Well, Henry Winkler had other ideas.

Speaking to Vanity Fair in 2016, the Happy Days’ star said that “letting the chance pass is hands down one of the smartest decisions” he’s made in his life.

The 72-year-old, who is friends with John Travolta, claims his pal deserved the role more than anyone else. He had this to say:

“Imagine me as Danny Zuko! Sure, I can bust some “Grease” dance moves, but I am pretty sure I can’t sing. Hence, I thought to myself, “you know what, I have had the pleasure of playing The Fonz for a decade, I have no choice but to say no to Grease.”

In the interview, Henry Winkler refers to John as a “lovely man”. The two met when they were both launching their TV careers back in the day.

Over the years, there has been a ton of controversy claiming that the two celebs don’t like each other very much. This couldn’t be further from the truth.

Travolta and Winkler recently posed for an Insta post at the Chicago Comic-con. The media apparently invented stories of the two A-listers fighting.

I Did Not Want To Be A Typecast

Henry Winkler also spoke to AARP the Magazine in 2018 on the same topic. This time, his reason for passing on being Danny on Grease was so he would skip being a typecast.

“I said no to the leading role. I didn’t desire to be a typecast. The funny thing is I am a typecast regardless. It is not now that I realize I should have accepted the role. I made the decision intellectually rather than instinctively. Don’t ignore your gut—it is a master in everything. Your brain only knows certain things. So I made my way home and drank orange juice while Travolta went and purchased a plane” he joked.

When the Grease director asked Henry to take on the leading role in the film, he was already staring as Arthur Fonzarelli (Fonzie) on the popular TV show, Happy Days. He was a beloved ladies’ man and a seasoned biker on the show. If you watched Grease, you know that Danny and Fonzie had some similarities. They were both bad boys belonging to boy groups. Henry also declined the role because the roles were somewhat similar.

If you think that the lead role was the only one with a different actor from the original one, think again. Grease producers made more than one switch throughout the filming.

In the Vanity Fair piece, the creators disclosed that the Rock n’ Roll King Elvis Presley was also supposed to take on Teen Angel’s role. Unfortunately, the music icon met his death in 1977 during filming, and his role was extended to Frankie Avalon.

Although Olivia Newton-John clinched Sandy’s role, there were other considerations, including Susan Dey, the late Carrie Fisher, Marie Osmond, and Deborah Raffin.

Her co-star John Travolta had an interview with People Magazine in 2018, and he had this to say: “Only one person deserves this role – Olivia Newton-John… she’s the dream of every guy.”

However, the actress, who was a country singer, then showed some reluctance when asked to join the cast. Apparently, a previous film hadn’t done well, plus she was a 29-year-old lady who was supposed to play a teenage girl. She wasn’t sure she would pull off the role. Thankfully, the actress agreed to go through with it after seeing the strong chemistry she had with John. The movie should become her biggest role, even furthering her music career with future hits, giving us songs such as “Physical” or “Come on over”.

John Travolta is perfect for Grease. Although most fans cannot imagine the box office smasher without him, Henry Winkler would have likely given the film his kick too. The good thing is that both men are successful and are good friends. And that matters more than anything else.

Fun fact: John Travolta later turned down a couple of Hollywood roles that made Tom Hanks a movie icon. Films such as “Forrest Gump”, “Apollo 13” or “Splash” were offered to him first, before becoming signature roles and Oscar gold for Hanks.