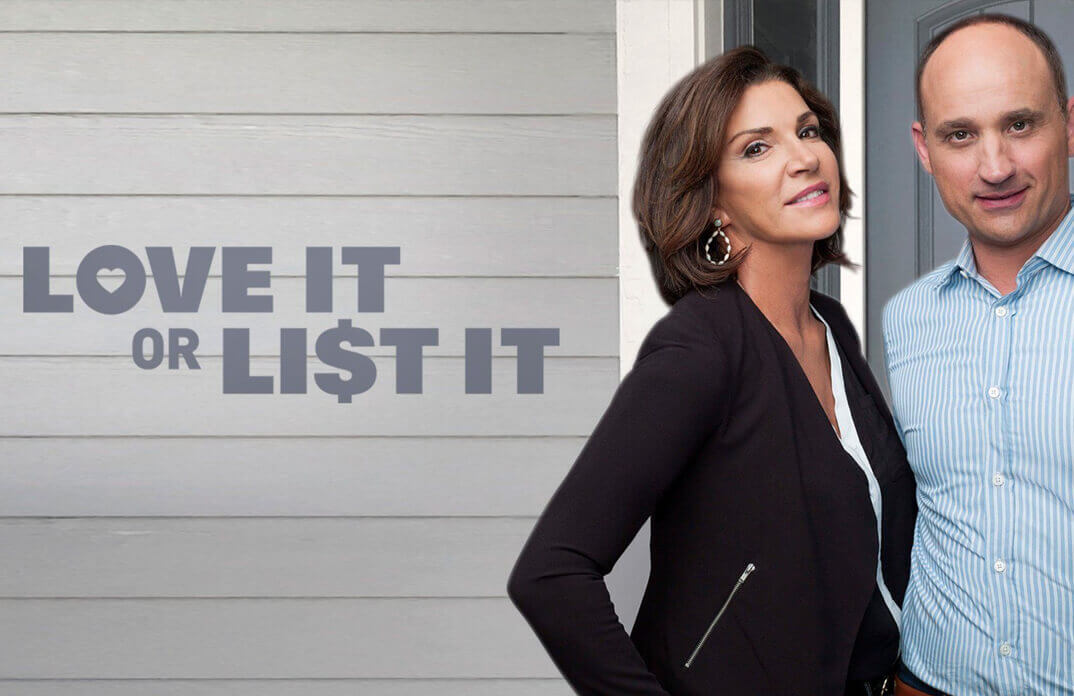 After watching HGTV for years, we have learned not to trust everything we see. Many of the channel’s reality shows have a reputation for misleading audiences.

Despite blurring the lines between the truth and lie, it’s undeniable that their reality shows still offer viewers a fresh perspective of the world, and window to knowledge, and ideas – like HGTV’s Love It or List It, which gives insight into home furnishing and the real estate market.

Viewers arguable watch the show more for the home transformations rather than dramatized bickering between the show’s host Hilary Farr and David Visentin or its excessive scripting. However, it’s still good to know the truth about exactly what you’re being shown.

Here we reveal a few behind-the-scenes secrets that Love It or List It uses to keep viewers glued onto their screens.

Typically, when viewers begin to catch on to any show having repetitive formatting or the same cast members squabbles, the authenticity of a show raises red flags.

On every episode of Love It or List It, viewers are first introduced to homeowners unhappy about the state of their homes. The show’s hosts, Hilary and David, are put on task to solve this dilemma. David Visentin, a real estate agent, proposes looking to buy houses on offer that would better cater to the homeowner’s needs.

At the same time, home designer, Hilary Farr, devises a renovation plan to convince homeowners to stay in their current homes and fix whatever problems they might face.

The two, trying to prove who is the better persuader, battle it out to see whether couples will stay in their existing homes or choose to purchase a new one.

It seems like a normal competitive show until you realize just how repetitive the order of disputes, problems they encounter, and outcomes they get.

Popular writer Julia Sweeten explained it well in her blog Hooked on Houses.

“If you really believe that the same basic pattern plays out naturally in every episode (the homeowners don’t trust Hilary’s plan, they hate the first house David shows them, Hilary runs into a major construction/financial problem that requires eliminating one of the projects she promised the homeowners she’d do, and then David finds them their dream house), well, I have a bridge to sell you,” wrote Sweeten.

Host Hilary has refuted claims of the show being scripted, stating, “The show is not at all scripted, and the reactions of the homeowners to renovation realities and bad news is very real.” reported Screennrants.

At the end of a single episode, homeowners reveal whether they are happy about the additional renovation designs and love it or more inclined to live in one of the homes on the real estate market, choosing to list their existing home.

Viewers get front seat access to probably the climax of the show. However, the answers we see might unfortunately not be the true reflection of the homeowner’s feelings.

According to Country Living, Producers influence homeowners final decisions, disregarding their true sentiments. One show participant revealed on a Reddit post that people who claim to love it might end up moving, and oppositely, some claim to list it wanted to love it and stuck by their decision to stay.

The participant said, “My aunt and uncle were on Love It or List It,” a Reddit user wrote, “They had them record both endings, and the network chose which one they thought was best. They are still in the house, and they love it, but the show says they listed it.”

A Vancouver couple sued Love It or List It Vancouver after claiming the show enlisted a fake contractor to renovate their home. Homeowners Jeanine Almeida and Norman Waine filled a lawsuit against the show stating defects on their home, which begun once producers wrapped filming, posed a substantial danger.

Allegedly, shows producers told the couple they would end up with a high-quality renovation from an experienced professional. However, the couple claimed producers replaced resident contractor Kenny Gemmill with Kerry van der Grind, who had little to no experience with contracting work.

According to CBC, cheap renovations resulted in defects that could lead to mold, water damage, carbon dioxide leaks, and a higher risk of a fire.

If you have watched a bunch of episodes of the show, you may realize the homeowners are constantly with Hilary and David during the renovation process. Well, this has turned out to be one of the inaccurate portrayals of the show.

According to Screenrants, homeowners hardly ever met with Hilary or David during the filming of an episode instead interact more with the camera crew and the show’s producers.

The scenes we see play out on the screen of the homeowners, and the show’s hosts are shorter than we think and rehearsed. Again, showing us how homeowners are probably, in most part, told what to say and do.

So, are people still fans of the show?

When it comes to deceptions, you can only have people brush it off for so long. Eventually, the thought of indulging in something that is not all that true begins to turn viewers off.

Fortunate for Love it or List It, it has impressively aired on HGTV for fifteen seasons, with its last season garnering a record, with one of its episodes accumulating 3.4 million viewers.

Despite viewers pinpointing the fake-ness of the show, the drama that the fake part adds to the overall HGTV series appeal and seemingly has viewers coming back for more. The show is loved so much that HGTV decided it will give viewers 18 new episodes of a new one-hour-long show in 2021.