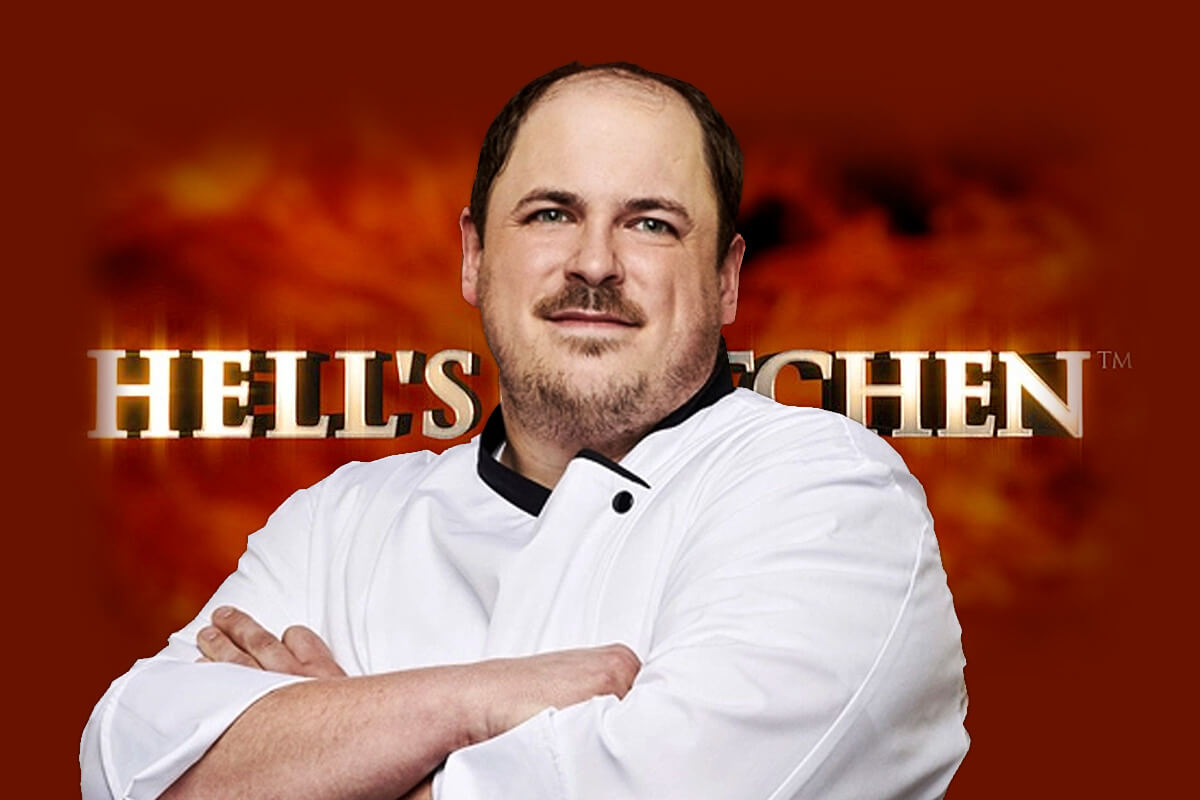 Season 19 of Hell’s Kitchen started with the usual dramatic high with competing chefs eager to make a great first impression.

Drew Tingley was one of the fifteen chefs who remained when episode 4 began. Unfortunately, the up-and-coming executive chef had to be wheeled away to the hospital, never to return to the popular cooking show, whose ultimate winner for episode 19 was Kori Sutton.

Read on for the tea on what happened to Drew on Hell’s Kitchen.

Who Is Drew Tingley on Hell’s Kitchen?

Drew Tingley was one of the 18 participants on the popular Fox show competing for a position as head chef at Gordon Ramsay’s brand-new Hell’s Kitchen Restaurant in Lake Tahoe at Harvey’s Hotel and Casino. According to his Instagram bio, he is an award-winning chef and a proud dad of three children.

Before being selected to compete, the Hell’s Kitchen star had just started a new job at Ard’s Farm, Lewisburg.

Luckily, his boss was supportive and allowed him to attend the show seeing as Gordon Ramsay was Drew’s idol.

Talking to the Daily Item, the aspiring head chef praised his bosses, “They were extremely gracious.” Drew added that he explained to his employer that although he had been on the job for just a month, he would really like to attend Hell’s Kitchen.

Drew revealed that his bosses supported and urged him to “follow his dreams.” This meant he could participate in the show and return to his job when it was time.

Tingely said he’d watched Gordon Ramsay’s Hell’s Kitchen since he was a child and admired the world-famous executive chef. But, he says he had never planned to be on the show, and the decision to apply was very spur-of-the-moment. Drew admitted that he didn’t even believe that he would be called.

So, the reality TV superstar was surprised when the show called to let him know he had been selected to compete on Gordon Ramsay’s platform. He explained to PennLive, “I lost it. I was dancing around my house, screaming. I was excited.”

Drew has a fascinating story. For a long time, few people encouraged him to pursue his dream of becoming a professional chef; most people poo-pooed on the idea, so he stuck to being a line cook.

Being called to compete on one of the world’s biggest cooking shows was nerve-wracking, especially given that he is from a small town. Not only did he need to acquaint himself with his peers on the blue team quickly, but he also had to get used to the glitz and glam of Las Vegas.

Tingley explained, “You fly across the country and when you step out at Caesars Palace everything is lit up. It was absolutely gorgeous for someone from a small town.”

There is no doubt that Drew Tingley had such great potential and a shot at becoming the world’s net biggest professional chef.

So, it was incredibly sad that he had to leave the Hell’s Kitchen competition prematurely. The show was only four episodes when the hard-working blue-team member had to exit for medical reasons.

The aspiring celebrity chef said, “I worked so hard to get there and leaving the Hell’s Kitchen restaurant was a lot to take. But, your health comes first.”

The reality star explained how he quickly began feeling unwell. “I felt like shit. I barely slept nor ate and lost a whopping 22 pounds in one week.”

So, what sickness was Drew suffering from?

It turns out he had a serious case of rhabdomyolysis. This life-threatening syndrome occurs as a result of a muscle injury. If left unattended, it can lead to kidney failure and even death.

As Drew aptly put it, Rhabdomylosis is a big b***h.

Drew Tingley Health Issues Forced Him To Drop Out

On his Instagram Live with Tobias Eats, Drew explained that his fellow teammate and cast member, Peter, was the one who first noticed something was up. Peter, who used the bathroom immediately after Drew, noticed that Drew’s urine looked unhealthy.

Previously, Ramsay had yelled at Drew when his chef jacket seemed out of place and his pants kept slipping down during dinner service, ordering him to get a belt.

According to Tingley, in the first seven days of joining the Hell’s Kitchen restaurant, he lost 22 pounds. He explained to Tobias Eats, “The pressure is unreal…you are neither sleeping nor eating properly.”

The aspiring executive chef spoke to a medic on the show when his symptoms worsened. The medic asked him to go to the hospital, where he was admitted to the ICU in Las Vegas due to rhabdomyolysis.

When a muscle injury goes untreated, it can cause the muscle fibers to die and release their content into the blood, resulting in life-threatening complications.

Drew suffered permanent kidney damage but was lucky to have caught the problem early and had it treated. The good news is that he responded well to treatment and recovered quite well.

His sudden exit from Gordon Ramsay’s show meant that Tingley didn’t even get a chance to say goodbye to his fellow cast members. He said to Tobias, “What really hurts the most was not getting a chance to go back and say goodbye.”

Drew’s fans shared messages of support. One fan tweeted: “I feel sad when medical issues cause chefs on Hell’s Kitchen to leave.”

Another one said, “I really feel bad for Drew.”

Where Is Drew Tingley Now?

Despite his health scare forcing him out of Gordon Ramsay’s show early, Tingley is grateful to have met and interacted with his childhood idol and says he doesn’t take the experience for granted.

In a lengthy Instagram post he wrote after leaving Hell’s Kitchen restaurant, he thanked Gordon Ramsay for taking a chance on a small-town chef like him and making his dreams come true.

On the touching note, he said, “To my fellow cast members, I love you all and respect you above all. You have pushed me to be a better chef and person.”

Drew showed lots of love and support for his cast mates throughout the show until the end of season 19, when Kori Sutton emerged the winner and earned the title of head chef at the brand-new Hell’s Kitchen Restaurant in Lake Tahoe.

After his stint at Gordon Ramsay’s show, Tingley returned to working at Ard’s Farm in Lewisburg, fortunate to have an employer who fully supported his dream. He also works as a restaurant consultant and says plans are in the works for a cookbook.

So, there you have it! Now you know what happened to Drew Tingley on Hell’s Kitchen. We wish him the best, and hopefully, he might get another shot at participating in the Hell’s Kitchen show.