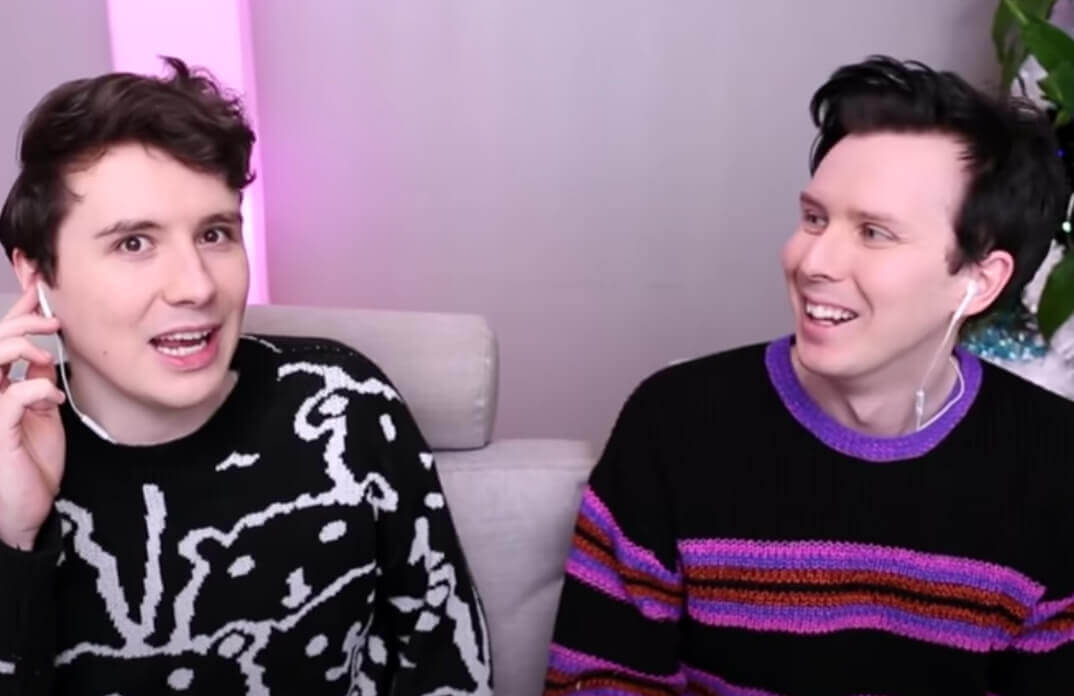 Ever since YouTube superstars Daniel Howell and Phil Lester came into the limelight, fans have had an intense interest in the duo’s current relationship.

Considering the amount of time these two spend together, the burst of photos they often post, the palpable chemistry between them, and the fact that they moved in together, it is no wonder the Phandom (Philip and Dan’s fans) is asking: are Dan and Phil together?

Are they, or are they not life partners? Read on—we’ll give you the low down!

Dan and Phil Met Online and Are Long-Time Collaborators

Daniel James Howell and Phil Lester first met online in 2009 before meeting in real life in October the same year. Dan, who is six years younger than Phil, was an early fan of Phil’s YouTube content.

As soon as Phil posted his first video on his channel AmazingPhil in 2006, Dan began persistently messaging him on Twitter, letting him know how much he loved his content and asking for collaboration.

Dan posted his first video on his channel danisnotonfire, in October 2009, and in that same month, the two met face to face in real life, and the rest, as they say, is history.

Soon after they met, they hit it off and created a truth or dare Q&A video titled philisnotonfire, which they posted on Lester’s channel. That first video turned into a 10-episode web series with one episode uploaded each year.

From then on, the two British internet stars collaborated on numerous projects and regularly appeared on each other’s YouTube channels, shared a lot of behind-the-scenes content, and even composed an original song together.

Some of their popular joint projects included The Super Amazing Project, where the two, in their humorous style, tried to investigate paranormal happenings. Lester, Martyn, Lester’s brother, and Howell co-founded IRL Digital to sell celebrity merchandise.

Despite the early success of their joint channel, the popular content creators only posted a few videos before pausing. As of now, their last upload was in December 2018.

Aside from their popular evening entertainment show, Dan and Phil also dabbled in the film industry, mostly doing voiceovers and sharing backstage videos.

They also co-wrote a book titled, The Amazing Book Is Not On Fire published by Ebury Press Random House Children’s Books, which became a #1 New York Times Bestseller in the young adult category.

Dan and Phil Go Outside’s photobook and original film, which contained candid photos from their tours, was also a hit.

Dan and Phil May Have Been in A Relationship

Even though each of them has his own YouTube channel doing video blogging, Dan and Phil spent a lot of their time doing things together. Unsurprisingly, fans, especially the tumblr crowd, have always wondered whether these two were items, with many people shipping for the two hunks.

There’s also been aggressive speculation and questions such as, is Phil Bi? Is Dan pansexual? Are they polyamorous?

Well, the two popular video bloggers kind of put an end to the rumor mill when they each officially shared their life story and announced that they were queer people and hinted that they might be more than just friends and business partners.

In a personal video he posted on June 13, 2019, titled Basically I am Gay, Dan says, “It was more than romantic. This is someone who genuinely liked me, and I trusted them. For the first time since I was a child, I actually felt safe; we are real best friends.” He further added, “We are companions through life. Actual soul mates.”

Still, Dan seemed to be very careful not to reveal who he was referring to and wasn’t straightforward with whether or not he and Phil were in a relationship.

Howell went on to say, “I know so many of you wanna know more than that, which I take as a compliment, but here is the thing…I am somebody who wants to keep my personal life private, and so does Phil.”

He may not have been explicit about his relationship status with his long-term mate, but the fact that he spoke on his behalf saying that Phil also wants to keep lives private speaks volumes already!

Seventeen days after Dan’s emotional and beautiful coming out video, Phil also came out by tweet and then made his single video titled Coming Out To You to further expound on his tweet. Like Dan, Phil didn’t mention that he was in a relationship with Dan.

But, They Bought A House Together

After posting their coming-out videos, these two basically slowed down their activities on YouTube. Dan’s 2019 video was the last one he posted before taking a hiatus and leaving the Phandom wondering what was going on with one-half of the beloved pair.

On the other hand, Phil kept up with his personal YouTube channel and posted his usual content every other week.

At the start of 2021, Dan and Phil made a surprise return to YouTube with a special announcement posted to Phil’s channel. In the video titled Something we want to tell you, the two gave fans an update of what they have been up to these past two years since airing their coming-out stories.

Among the updates was the news we’ve all been waiting for: They bought a house together back in 2017, and they have been designing and sprucing it up, ready for the big move! They said they were in the process of packing up their apartment in London and were looking forward to the move. Congrats, mates!

Well, the lads had been living together in Manchester since August 2011. They were doing a ton of work together, and this living arrangement just made sense.

But it could also likely be because they are in a relationship. In July 2012, they made the big move to London, where they have been residing ever since.

The news about them buying a house, designing it, and moving in together almost confirms that Dan and Phil are in a relationship.

Investing in a house is not Something you do with just anyone; it is a serious step you only take with someone you are serious about. So, this is definitely good news for all those who have been real person shipping Phan!

What’s more, if you are both a Sims enthusiast and a fan of Dan and Phil, you will know these two have amazing interior design skills.

There is no doubt that their new house is going to be stunning. Back in January 2021, when they made the announcement, they said it would be a few months before moving, and going by Phil’s moving update tweets, the duo was either very close to moving or already did.

That said, don’t hold your breath for a video tour of their new house. As Dan explained in the video, they wanted to avoid getting caught up in materialism and keep their new home private.

They also said they were considering growing their family by bringing in a dog at some point. For now, they are preparing themselves for the big emotional responsibility of caring for a pet and are not in a big rush.

Dan and Phil Are Planning Great Things Together

It is clear from their January video that these two super attractive people are together. Even though Dan has not gone back to posting community content on YouTube, there’s a lot they are planning behind the scenes.

Dan addressed his hiatus with quite a deep explanation saying, “This was an emotional and spiritual and personal growth journey that I chose because you know the gay video, I really felt like I hadn’t had the time to ask, “Who am I, what do I want and what do I want?”

Dan has been working on a couple of things during the time that he has been away. In September 2020, he announced on his Instagram that he would be releasing a book titled, You Will Get Through This Night.

He described the book, which is primarily about mental health, as personal and deep, and will likely make readers laugh and cry, but it might also “completely change your life.”

Aside from penning his book, Dan has also been doing photoshoots and even appeared on the UK’s popular gay magazine, Attitude, when he had been away.

He also let out some great news and what fans have been waiting to hear: Dan Howell might be returning to YouTube with content still in the pipeline. We can’t wait! But, for now, Dan is still deep in his hiatus working on his upcoming book.

On the other hand, Phil is still creating and posting his usual meaningful content for his loyal fan base. In their Something, we want to tell you video, Phil insisted that contrary to ongoing rumors, they were not looking to change or abandon their gaming channel altogether drastically.

Instead, they are considering doing some streaming or going back to their usual content. He said they were also thinking of bringing casual conversation videos, and one-on-one time and the gaming content. So far, they haven’t settled for anything and are still figuring it all out. Hopefully, we will see the duo soon on their super popular gaming channel.

In their coming-out and other moment compilation videos, Dan and Phil mentioned the kind of pressure they experience when many people want to know everything about them. Daniel Howell said he took this as a compliment but preferred to keep things private despite the pressure from other invasive people.

Even after being open about their sexuality, everyone still wondered whether Dan and Phil were together. The lads haven’t openly admitted to being a couple, but when you consider everything going on in their lives, the chances are good that they are in a relationship with each other.

First, there’s fantastic chemistry between these two. Aside from that, they bought a house and are moving in together, which is a pretty big step, and it could be the ultimate sign that they are indeed an item.

Whether or not they are romantically involved with each other, it is clear that Dil (Dan and Phil) are two people with chemistry and are real besties and smart business people to boot. They do everything together, have been great supporters of each other, and are amazing life partners.

We wish them all the best, and although it would be great to have them back producing entertaining content together, these are real people with real needs, and they can take however they want until they are ready to return.