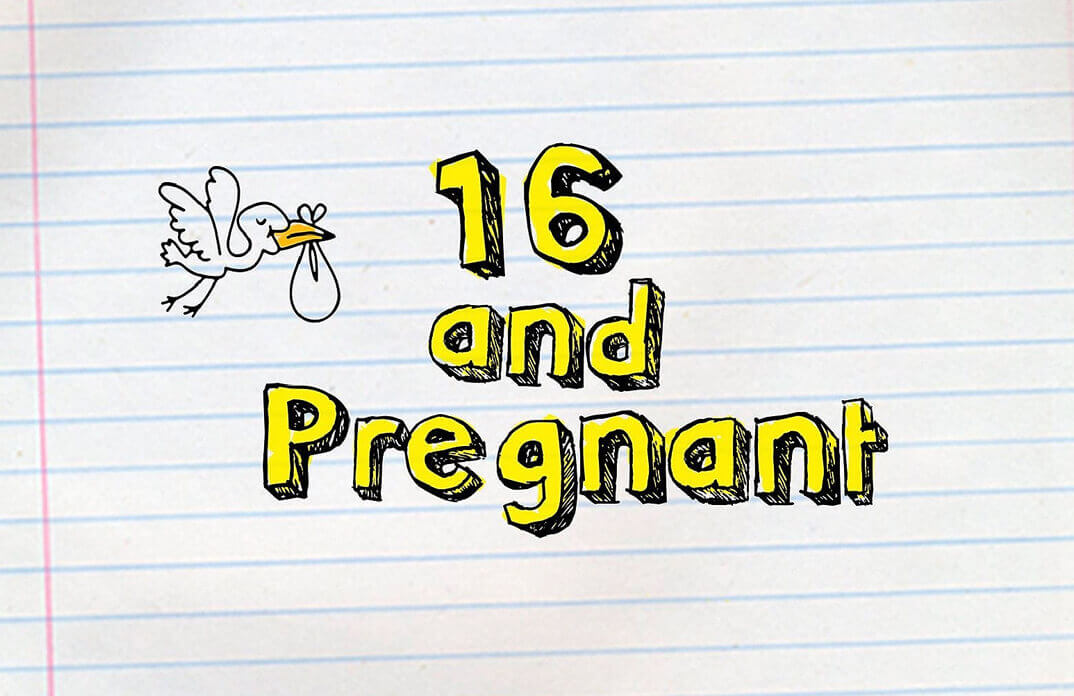 16 And Pregnant is the Teen Mom O.G. It is one of those shows which transitioned MTV from a music channel to a full-fledged Reality T.V. channel. Although the show’s premise was ideal for voyeuristic viewing, the audience would see clueless and pregnant teens making some tough choices in their life.

The decisions ranged from deciding on a college football scholarship to figuring out the baby’s adoption agency. It has also shown the journey of all kinds of teen moms, from an author to a cage fighter. The viewers have truly seen it all. The once-pregnant teen moms who made the show famous are all adults today.

While some of them have really sorted their issues, there are still some who just can’t seem to get their life together. So today, we’ll take a look at all the women who starred on the show and see how far they’ve moved on since then:

Whitney had one unique storyline on the show. When the 16-year-old-girl school senior got pregnant, her mother was also expecting. Whitney and her boyfriend Weston Goza were living with his grandmother due to their poor financial condition.

In an episode, it was also revealed Purvis’s baby had a genetic health condition. The same year her mother got arrested, which made Purvis take care of two children. Like many before them, Purvis and Goza couldn’t take the pressure and broke up soon after.

They even got back together again in 2014 and had another child but ended up separating again. Today Whitney is an aspiring chef who wants to give her children a good life.

Kayla was on Season 2 of the show. People still remember the then 17-year-old girl for having a vivacious personality.

She had a love for horses and liked shooting guns.

Kayla and her boyfriend J.R. were much less dramatic than many couples. He even proposed to her and was ready for her to move in with him. However, Jordan was living with her parents and wanted to keep it that way.

She also soon started taking her college classes again. Jordan was disappointed not to have a spinoff of her own as many teenage mothers have since gone off to have their special spinoffs called “Teen Mom.” Since she first appeared on 16 and pregnant, Kayla has seemed to be doing alright.

She and J.R. broke up shortly after their stint on the show. She then gave birth to another baby with her then-fiancee, Zach Bedwell, but even that romance was short-lived. Today she is happily married to Dakota Jones and is a mother of three children.

Lizzie Waller was in Season 2 of 16 and Pregnant. Lizzie was extremely ambitious about her musical career, and most viewers interpreted it to be quite delusional too.

Her boyfriend Skylar Sickles was probably one of the worst boyfriends of the show. He was the exact representation of guys who will knock up a girl and then cheat on her with her best friend.

Despite what Skylar did, Waller always forgave him for his wrongdoings. Fans were really disappointed in her when she even let go of him cheating on her that too on camera.

Waller had this idea of a perfect life for which she kept turning a blind eye to Sickles’s poor habits, but he could not change his ways even after they got married. Two years after getting married, Lizzie and Skylar got divorced. Today Waller leads a life more sorted than before she was met a man named Dave Mortensen and had his baby.

Even in her career, she is doing well. She has been working as a dental assistant and is far from her old naïve self.

Jamie Mckay was a high school senior. The 17-year-old girl appeared on Season 3 of the show. Her introduction was surprising because she wasn’t a party girl; Jamie was an honor student, and she was also on the student council of her school.

Her boyfriend Ryan McElrath was also up to no good and was always there to make her pregnancy more difficult. His behavior was disgusting, and even when Mckay went into labor, he was nowhere to be found.

He only came after she had given birth. Even then, he was completely hungover. Jamie tried her best, but Ryan was in no shape to be a responsible partner. They even fought a nasty custody battle and accused each other of substance abuse and drunk driving. Mckay was a bright student. She went back to school. Even after their custody battle, Mckay decided to give her relationship a chance with Ryan.

They welcomed another baby boy in 2015, but even with that, their relationship was cut short. After Ryan, Jamie met someone else. After going out for a while, she introduced the world to David as her fiancee, and the couple welcomed their first baby in summer 2018.

Valerie had one of the most tragic stories that ever got documented on the show. She was a troublesome young girl, and it didn’t help that she became a mother so early on in her life that too on a reality show. Her boyfriend Matt Pryce was also just like her and didn’t provide any stability into this whole equation.

He didn’t even believe the 15-year-old girl was even pregnant with her child. She had to give the proof by giving him the DNA test report. Fairman didn’t treat anyone nicely. She had a lot of issues, even with her parents.

She was even arrested for assaulting her mother after the filming was done. People on the internet were also not kind to her. She was trolled for her nasty behavior, and it only damaged her mental health more.

Sadly for Valerie, her life only got more rough after the show ended. She became an addict and even got arrested for prostitution and drug charges. She kept going in and out of rehabilitation centers but never fully recovered.

Then one day, she was found dead in her friend’s bathroom. The medical report concluded she had overdosed on drugs. Today her baby girl lives with her grandmother.

The audience remembers Megan because of her striking pink hair color. She was on season two and had a boyfriend called Nathan Stone.

Their living dynamics were quite interesting for viewers because Nathan used to live with her family.

He was too much into video games like a regular teenager. Fans were furious that Megan was about to have a baby, and her boyfriend wasn’t letting his old habits go.

Megan was one of the more mature participants. She dealt with the situation as positively as she could. After the show ended, Megan and Nathan got married. She told in an interview that he did become more responsible after all.

Things were fine for a while, but even they didn’t last, and they got divorced. Kayla Jordan became a matchmaker for Megan and introduced her to her now-husband, Chase Eubanks. The couple welcomed their son in 2015 and decided to call him Silas.

When the show premiered, what made people worry was that many young girls would now get pregnant only to be on television. Their fear was proved correct when Jennifer Del Rio appeared on the third season of the show. The rumors were buzzing strong that she wanted to be on the show so badly that she got pregnant.

She and her boyfriend Josh Smith soon proved that they were in no shape to raise a child together. Verbal fights were common for two. They didn’t even hesitate to abuse each other physically.

They were that one couple who everyone thought was messed up beyond any redemption. Towards the end of their last episode, they got into an ugly spat which resulted in Josh leaving Jennifer alone on the footpath. She then left Florida to get away from all the drama.

Today Del Rio is married to a guy named Luis Gutierrez and is a mother of four children. She is also a YouTuber who guides new mothers about the dos and don’ts. She even became a photographer and keeps updating her fans on social media.

Maddy was slightly different from than rest of the teen moms of the show. She had gotten pregnant due to a one-night stand and didn’t lie about it when she came on the show. Since the beginning, she had no high hopes for the guy whose child she was carrying.

Maddy was quite sporty. She played volleyball and basketball. Maddy’s mother wasn’t accomodating like many mothers on the show, and she gave her an ultimatum to leave her house after one month of giving birth.

Her journey revolved around mostly around her finding a suitable place to live after having her baby girl. Maddy said that her baby daddy Cody was just a rebound when she accidentally got pregnant, so she knew there was no future.

For her daughter Aubrey’s sake, she tried to give their relationship a shot, but Cody soon proved Maddy’s instincts were right.

He was all about drinking, domestic violence, and sleeping around, which made him a terrible influence on their child’s life.

Soon after, the teen mother stopped giving any interviews and left the town to live peacefully as a single mother with her daughter.

Ashley’s journey was one of the most tear-jerking stories of the entire season. She was a sweet teen who only wanted to do the right thing. Ashley and her boyfriend Justin Lane were still deciding on what they both wanted. Salazar and Lane both wanted to finish their education, pursue their careers, and possibly live in different cities.

So they came to the tough conclusion of giving their baby up for adoption. Soon Salazar’s uncle and aunty came to their rescue and decided to take the primary custody of the baby. That way, the child would still be in the family.

Unlike many couples on the show, luck would have it. Ashley and Justin ended up getting engaged and even had another child in 2017.

Salazar even turned a writer to tell her whole experience and titled the book #BittersweetBlessing.

Nikkole had one of the most bizarre journeys on the show. She was a typical 17-Year-Old high school senior party girl and got pregnant by her boyfriend, Josh Drummond. Her boyfriend was the worst guy to ever have a child with, but she learned her lesson the hard way. From the get-go, the public saw that guy was up to no good. He didn’t handle her pregnancy well at all.

Drummond’s only input was to fight with Paulun and her mother constantly. In the finale, it became evident why Drummond was giving such an off vibe since the beginning he ended the episode by getting arrested for drug-related charges. While he was doing his time, Nikkole tried her best to raise the child alone.

In 2011, Drummond had a long charge sheet that included charges like assault, drug possession, domestic battery, and eluding the police. Paul dated another guy called Ryan Rice, and the couple welcomed a daughter together but still ended up parting ways. After Ryan, Nikkole went back to Drummond, and again their cycle of abuse began.

Soon after, he went to prison for assault, and now Nikkole has sworn to never get back with him. She has also filed a police report against him and doesn’t want him around her children. She is now a single parent to her two children.